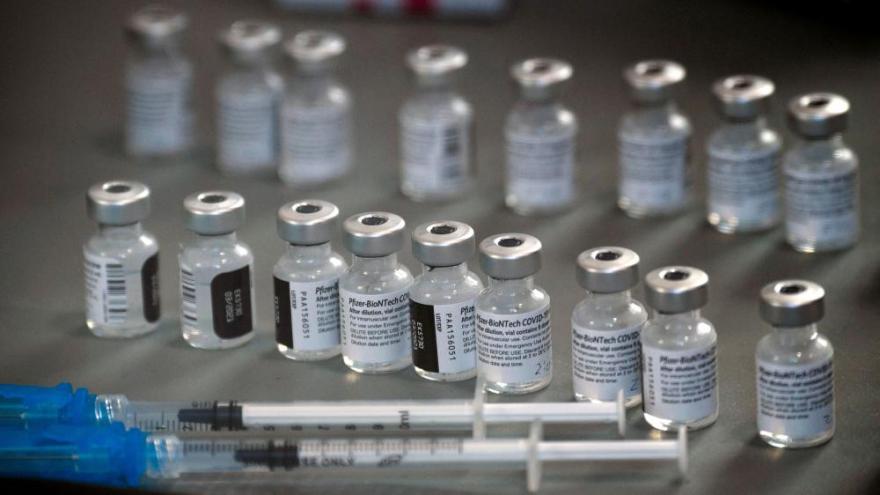 The Biden administration will require nursing homes to get their staff vaccinated or lose federal funds.

(CNN) -- President Joe Biden announced on Wednesday that he is directing all nursing homes to require their staff be vaccinated against Covid-19 in order to continue receiving Medicare and Medicaid funding.

Biden said he is directing the Department of Health and Human Services to draw up new regulations making employee vaccination a condition for nursing homes to participate in Medicare and Medicaid. The decision on nursing home staff represents a significant escalation in Biden's campaign to get Americans vaccinated and the tools he is willing to use, marking the first time he has threatened to withhold federal funds in order to get people vaccinated.

"Now, if you visit, live or work at a nursing home, you should not be at a high risk of contracting Covid from unvaccinated employees. While I'm mindful that my authority at the federal government is limited, I'm going to continue to look for ways to keep people safe and increase vaccination rates," the President said during a speech at the White House.

Additionally, the President announced that he is directing Education Secretary Miguel Cardona to use "all of his oversight authorities and legal action, if appropriate, against governors who are trying to block and intimidate local school officials and educators" who want children to wear masks in the classroom.

The President indicated that American Rescue Plan funds can be used to pay educators who have their paycheck cut by local and state governments if their schools implement mask mandates.

The new actions announced by the President Wednesday afternoon come the same day the Biden administration said it would roll out a plan to provide booster shots to American adults beginning this fall.

"As we see the spread of Delta and the threat of Covid cases, it is really especially important that we ensure that those caring for our most vulnerable are vaccinated," Carole Johnson, a senior official on the White House's Covid-19 response team, told CNN in an interview.

The move comes as the more transmissible Delta variant now accounts for 99% of Covid-19 cases in the United States and as data shows a link between low vaccination rates in certain nursing homes and rising coronavirus cases among residents.

The Delta variant has spurred a jump in daily new cases from a low of 319 on June 27 to nearly 2,700 on August 8, according to Centers for Medicare & Medicaid Services. Many are in facilities in areas with the lowest staff vaccination rates.

The new regulations could go into effect as early as next month, but Johnson said the CMS will work with nursing homes, employees and their unions to ramp up staff vaccinations before the regulations go into effect.

About 1.3 million people are employed by the more than 15,000 nursing homes that participate in Medicare and Medicaid. Some 62% of those workers are vaccinated nationwide, according to CMS data, but the figure ranges from 44% to 88% depending on the state.

"We have seen tremendous progress with low Covid rates within the nursing home population and I think we're seeing signs that it is starting to tip the other direction. We don't want to go backwards," said Jonathan Blum, CMS' principal deputy administrator.

Blum said CMS officials are "confident we have the legal authority" to implement the new regulation, noting that the law allows CMS to take action as it relates to the health and safety of nursing home residents.

Biden began taking an increasingly muscular approach to boosting vaccination rates last month amid a plateau in vaccinations and the rapid spread of the Delta variant, including requiring all federal workers to attest that they have been vaccinated or be regularly tested for the virus. A slew of private companies have also since announced similar requirements for their workers.

"We are on a wartime footing here. We are leaning in to making sure we are taking the steps that we can to ensure the health and safety of Americans and we will continue to do so," Johnson said. "Delta's not waiting and so we're not waiting."

A nursing home industry group, however, said imposing a mandate only on such facilities could cause a "disastrous workforce challenge," instead arguing all health care workers in all settings should be subject to the requirement.

"Focusing only on nursing homes will cause vaccine-hesitant workers to flee to other health care providers and leave many centers without adequate staff to care for residents. It will make an already difficult workforce shortage even worse," said Mark Parkinson, president and CEO of the American Health Care Association and National Center for Assisted Living, which represents 14,000 facilities. "The net effect of this action will be the opposite of its intent and will affect the ability to provide quality care to our residents."

More than half of the nursing home and assisted living providers have lost key workers due to staff quitting last year, according to a June survey by the group. Some 94% of nursing home providers and 81% of assisted living communities said they have had a shortage of staff in the last month, the survey found.

Many facilities are already struggling to stay afloat as occupancy rates hit record lows last year and revenues declined. Federal funding is critical to their existence. The industry has been pressing HHS to release the remaining money in the Provider Relief Fund, authorized in Congressional relief packages last year, so nursing homes can cover increased costs for personal protective equipment, testing and additional staffing.

"Defunding the care providers who continue to fight on the front lines would be a tragic misstep," said Katie Smith Sloan, president and CEO of LeadingAge, an association of nonprofit providers of aging services, including nursing homes. "Without Medicaid and Medicare funding, nursing homes cannot provide the quality care that our nation's most vulnerable older adults need."