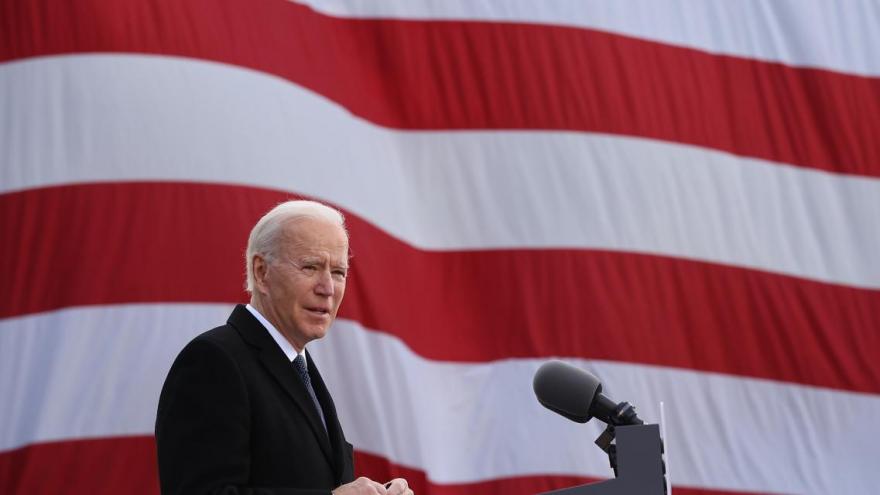 One day before being inaugurated as the 46th president, President-elect Joe Biden delivers remarks at the Major Joseph R. "Beau" Biden III National Guard/Reserve Center January 19 in New Castle, Delaware. He will rescind the 1776 commission via executive order.

(CNN) -- President-elect Joe Biden will issue an executive order to dissolve the 1776 commission, a panel stood up by President Donald Trump as a rebuttal to schools applying a more accurate history curriculum around slavery in the US, Biden's transition team announced Wednesday.

The commission had been formed as an apparent counter to The New York Times' 1619 Project, a Pulitzer Prize-winning project aimed at teaching American students about slavery that Trump, speaking last fall, had called "toxic propaganda." The announcement comes just two days after the commission issued an inflammatory report on Martin Luther King Jr. Day and just hours before Biden will take over from Trump, whose time in office was marked by racist statements and actions.

In its report released Monday, the commission asserted that "the Civil Rights Movement was almost immediately turned to programs that ran counter to the lofty ideals of the founders," specifically criticizing affirmative action policies and arguing that identity politics are "the opposite of King's hope that his children would 'live in a nation where they will not be judged by the color of their skin but by the content of their character.' "

Calling today's ideological divisions akin to those experienced during the Civil War, commission members also took aim at feminists and the widespread use of ethnic and racial identities in American life, arguing that they had been constructed by "activists."

"A radical women's liberation movement reimagined America as a patriarchal system, asserting that every woman is a victim of oppression by men. The Black Power and black nationalist movements reimagined America as a white supremacist regime. Meanwhile, other activists constructed artificial groupings to further divide Americans by race, creating new categories like 'Asian American' and 'Hispanic' to teach Americans to think of themselves in terms of group identities and to rouse various groups into politically cohesive bodies," the report stated.

Trump announced that he was establishing the commission last fall, following a slew of Black Lives Matter demonstrations across the country. He had blamed the school curriculum for violence that resulted from some of the protests, saying that "the left-wing rioting and mayhem are the direct result of decades of left-wing indoctrination in our schools."

Larry Arnn, the president of Hillsdale College, who had drawn criticism for his comments in 2013, when he said state officials had visited the college to see whether enough "dark ones" were enrolled, was chosen to chair the commission. Carol Swain, who once wrote that Islam "poses an absolute danger to us and our children," was chosen as vice chair.

Other Republicans have slammed The 1619 Project and expressed similar sentiments about the adoption of ethnic and racial identities.

Sen. Tom Cotton, an Arkansas Republican, introduced legislation last year that would prevent schools from teaching the curriculum. And Secretary of State Mike Pompeo, with one day left in his tenure, took to his taxpayer-funded Twitter account and denounced multiculturalism, saying it is "not who America is."

"Woke-ism, multiculturalism, all the -isms — they're not who America is. They distort our glorious founding and what this country is all about. Our enemies stoke these divisions because they know they make us weaker," he wrote Tuesday.

Nikole Hannah-Jones, the creator of The 1619 Project, said Pompeo's tweet proved the thesis of the project.

"When you say that multiculturalism is 'not who America is' and 'distorts our glorious founding' you unwittingly confirm the argument of the 1619 Project: That though we were ... a multiracial nation from our founding, our founders set forth a government of white rule. Cool," she wrote on Twitter, also saying that the Trump administration had tried to censor The 1619 Project.

In September, Trump said the US Department of Education would investigate whether California schools were using The 1619 Project in public school curriculums, and he banned federal agencies from conducting racial sensitivity training related to "white privilege" and "critical race theory."