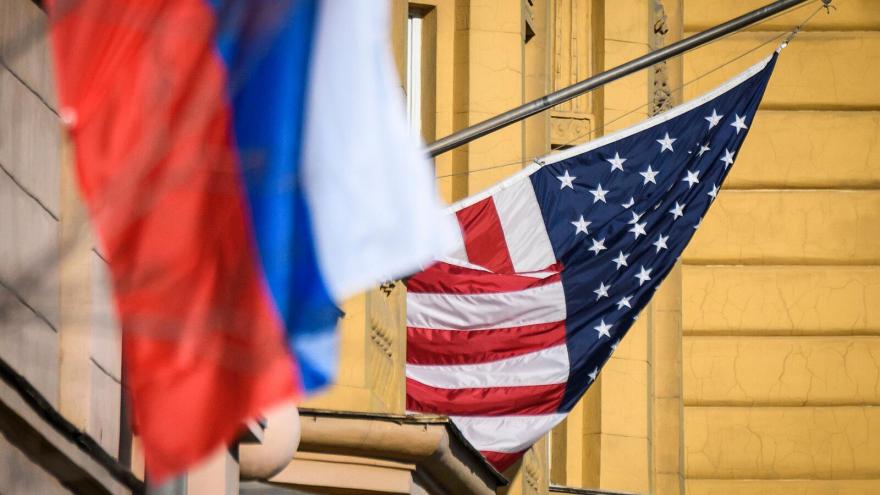 President Biden will seek a five-year extension of the key nuclear arms treaty with Russia. Seen here, a Russian flag flies next to the US embassy building in Moscow on October 22, 2018.

(CNN) -- The White House has ordered an intelligence review of Russian misdeeds ranging from the SolarWinds hack to alleged bounties on US troops, but will pursue an agreement with Moscow on an issue of mutual concern: nuclear arms control.

"Even as we work with Russia to advance US interests, so too we work to hold Russia to account for its reckless and adversarial actions," White House press secretary Jen Psaki told reporters at a briefing Thursday.

"To this end, the President is also issuing a tasking to the intelligence community for its full assessment of the SolarWinds cyber breach, Russian interference in the 2020 election, its use of chemical weapons against opposition leader Alexey Navalny and the alleged bounties on US soldiers in Afghanistan," she said.

President Joe Biden's intel chief, Avril Haines, was sworn in on Thursday and overseeing the assessment will be one of her first major tasks.

The launch of the review signals that Biden is prepared to take a more critical approach on countering Moscow than his predecessor, Donald Trump, who failed to forcefully condemn Russia over those incidents.

However, Psaki told reporters that the Biden administration is prepared to work with Russia on the New START Treaty, telling reporters that "the United States intends to seek a five year extension ... as the treaty permits."

"The President has long been clear that the New START Treaty is in the national security interests of the United States, and this extension makes even more sense when the relationship with Russia is adversarial, as it is at this time," she said.

"New START is the only remaining treaty constraining Russian nuclear forces and is an anchor of strategic stability between our two countries," Psaki added.

"Failing to swiftly extend New START would weaken America's understanding of Russia's long-range nuclear forces," he said in a statement Thursday. "Extending the treaty's limitations on stockpiles of strategic nuclear weapons until 2026 allows time and space for our two nations to explore new verifiable arms control arrangements that could further reduce risks to Americans."

"Just as we engage Russia in ways that advance American interests, we in the Department will remain clear-eyed about the challenges Russia poses and committed to defending the nation against their reckless and adversarial actions," Kirby said.

Russia's ambassador to the US, Anatoly Antonov, was due to meet with President Joe Biden's national security adviser, Jake Sullivan, on Thursday to discuss the treaty, according to Russian officials who spoke to CNN as they entered the State Department for meetings with other US officials on Thursday afternoon.

Biden team signaled he was in favor of extending the treaty

CNN previously reported that Biden advisers indicated that the administration would not seek a shorter extension on the landmark deal. Biden has expressed support for extending the deal with Russia and using it as a foundation to pursue future arms control arrangements.

Arms control experts had warned that allowing the treaty to lapse could prove catastrophic and on Thursday praised the news, first reported by The Washington Post, that the new administration planned to move forward with a full extension.

Daryl Kimball, the director of the Arms Control Association, called it "the common sense, no nonsense, adult decision."

"The New START Treaty is essential for US and Russian security, it's the only treaty left regulating the world's two largest nuclear arsenals," he told CNN.

"The Russian arsenal is the single biggest threat to the existence of the United States, so extending this treaty, by the maximum allowed by the treaty, makes sense. It provides the time that will be necessary to negotiate follow-on agreements,' he explained.

"Those negotiations will be extraordinarily difficult because we have over a decade of accumulated problems that have that have to be resolved in the US-Russian nuclear relationship."

Kimball noted that Moscow was in favor of an unconditional five-year extension and predicted that, "barring unforeseen complications, completing this agreement is a matter of working through the technicalities within the next two weeks."

US officials told CNN last month that the full breadth of the US-Russia relationship will be examined by the team. The Biden administration will also prepare a "cost imposition strategy" to respond to Russia -- not just for the massive hack of US agencies, but also for Russia's other disruptive actions -- measures that will include sanctions, according to the officials.

With regard to the New START Treaty, Secretary of State-designate Antony Blinken said during his confirmation hearing Tuesday that Biden intended to seek an extension of the treaty, but suggested he had not made a decision on the length of that extension.

Blinken noted that Biden "couldn't really engage" on the issue during the transition because he was "very cognizant of the fact we have one president at a time."

The Trump administration went back and forth with the Russians on the terms of a shorter extension to the longstanding treaty after efforts to create a new trilateral treaty with Russia and China failed.