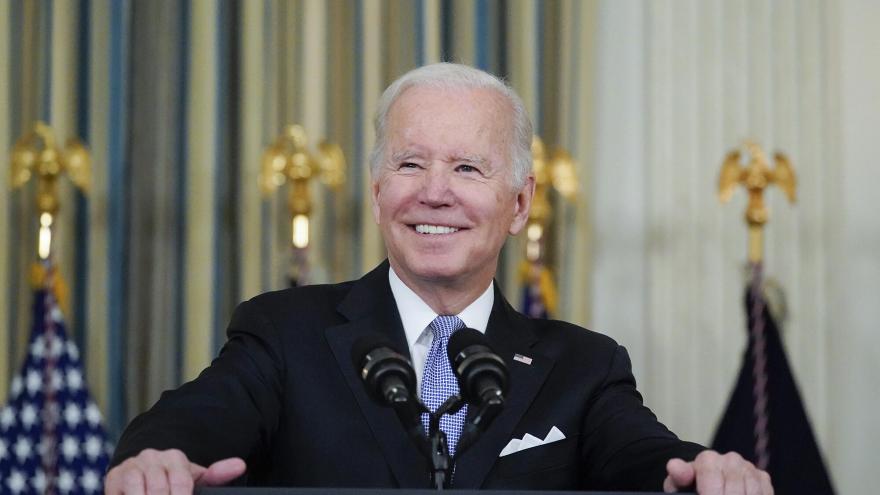 President Joe Biden is expected to pardon turkeys Peanut Butter and Jelly this afternoon. Biden is shown here in the State Dinning Room of the White House, Saturday, Nov. 6, 2021, in Washington.

(CNN) -- President Joe Biden on Friday will gobble up his first opportunity to participate in a time-honored White House tradition: The annual Thanksgiving turkey pardon.

Justice, and perhaps a side of cranberry sauce, will be served in the Rose Garden as Biden roasts two pardon contenders -- turkeys Peanut Butter and Jelly -- and spreads Thanksgiving cheer, making much ado about stuffing.

It comes on the heels of a busy week signing the bipartisan infrastructure bill into law and then promoting it across the country. The rest of the week, they say, is gravy.

The Indiana-raised birds flocked to Washington, DC, this week, attending a press conference where they ruffled some feathers Thursday with the National Turkey Federation ahead of their White House appearance.

"Raising the presidential turkey flock has really been a lot of fun this year. As we all know, with another year of uncertainties with the pandemic, this project has really been something to look forward to," grower Andrea Welp said as her turkeys strutted in front of the podium.

Expect fowl language and a cornucopia of jokes in the Rose Garden, but the pardon comes amid inflation at the Thanksgiving table. A new survey by the American Farm Bureau Federation found that Thanksgiving dinner will cost 14% more for Americans this year, with several factors leading to the increased pricing, including more Americans expected to cook at home this year and other economic disruptions. While that survey found that turkey is up 24% since last year, that price is dependent on when the poultry was purchased.

Pardon nominees in years past have had more Thanksgiving-themed names, including Corn and Cob, Peas and Carrots, and Tater and Tot. Perhaps this year's name selections of Peanut Butter and Jelly reflect that any food can be a Thanksgiving food when there's a supply chain bottleneck and rising prices.

But, Agriculture Secretary Tom Vilsack said in a statement Wednesday, "The good news is that the top turkey producers in the country are confident that everyone who wants a bird for their Thanksgiving dinner will be able to get one, and a large one will only cost $1 dollar more than last year."

Presidents have largely used the tradition to poke fun at themselves, and their feathered friends.

Last year, as then-President Donald Trump refused to accept the results of the 2020 election earlier that month, he largely eschewed public events, but took the podium to pardon Cob and tout his "America First" agenda.

In previous years, Trump joked about the impeachment inquiry, telling a crowd in 2019 that the turkeys "have already received subpoenas to appear in Adam Schiff's basement." In 2018, he said the vote was decided by a "fair and open election" -- no fowl play involved. But he teased that Carrots refused to concede and demanded a recount, although that didn't change the outcome. And in 2017, he joked that despite his efforts to overturn former President Barack Obama's actions in office, he had been informed he could not revoke pardons for birds Tater or Tot.

During his 2016 turkey pardon, Obama employed his signature rhetoric, "I do I want to take a moment to recognize the great turkeys who weren't so lucky, who didn't get to ride the gravy train to freedom. Who met their fate with courage and sacrifice and proved that they weren't chicken."

Rumors of turkey pardons go back in presidential history as far as the Lincoln administration. Folklore has it that Lincoln's young son asked his father to spare a pet turkey that was supposed to be part of their Thanksgiving dinner.

The National Turkey Federation became the official turkey supplier to the first family in 1947 and the formal turkey presentation ceremony has been around since President Harry Truman. Truman was the first to accept a turkey from them -- however, he did not spare the bird.

The first documented turkey pardon was given by President John F. Kennedy in 1963, though it didn't catch on right away. Even though President Gerald Ford pardoned President Richard Nixon, neither one of them decided to officially pardon any turkeys.

Peanut Butter and Jelly strutted into the luxe Willard Hotel earlier this week.

Both birds will avoid the fate of their turkey brethren expected to be consumed across the country this Thanksgiving, according to the National Turkey Federation.

Following the ceremony, they will retire to their home state at Purdue University's Animal Sciences Education and Research Farm.