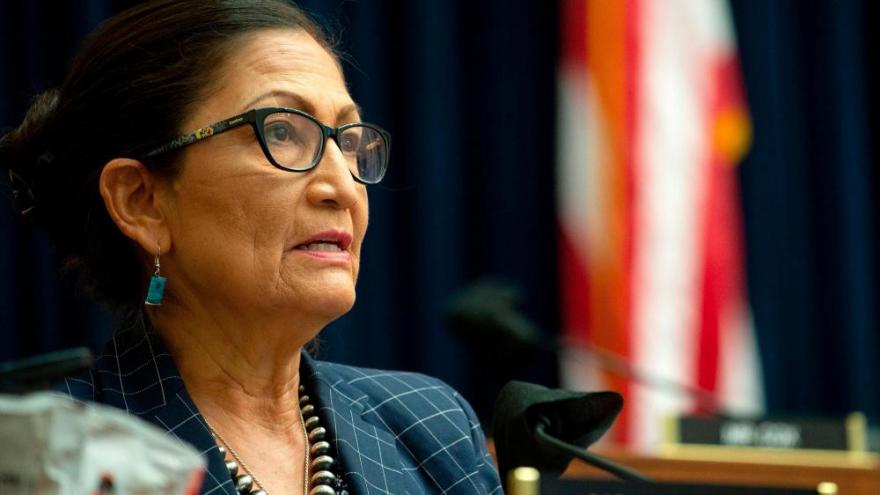 Representative Debra Haaland (D-NM) speaks during a House Natural Resources Committee hearing on "The US Park Police Attack on Peaceful Protesters at Lafayette Square", on Capitol Hill in Washington, DC, on June 29, 2020.

"A voice like mine has never been a Cabinet secretary or at the head of the Department of Interior," Haaland wrote in a tweet Thursday evening. "Growing up in my mother's Pueblo household made me fierce. I'll be fierce for all of us, our planet, and all of our protected land. I am honored and ready to serve."

The transition team on Thursday also announced key members of Biden's climate team, including Brenda Mallory, an environmental lawyer who is nominated to serve as the chair of the Council on Environmental Quality, and Ali Zaidi, a climate expert and longtime Biden adviser who will serve as deputy national climate adviser.

Jennifer Granholm, the former governor of Michigan, is Biden's nominee to lead the Department of Energy, Michael Regan, who runs the North Carolina Department of Environmental Quality, is Biden's nominee to lead the Environmental Protection Agency and Gina McCarthy, a former head of the EPA, will be Biden's national climate adviser, the transition team announced. CNN had previously reported these picks.

Haaland was picked for the role, in part, because she is someone who has "spent her career fighting for all Americans, including tribal nations, rural communities, and communities of color," according to a person familiar with the decision.

The US Department of the Interior conserves and manages the nation's natural resources and cultural heritage, as well as oversees the federal government's relationships with Native American tribes.

Haaland made history in 2018 when she was elected as one of the two first female Native Americans in Congress. She is an enrolled member of the Pueblo of Laguna, and also has Jemez Pueblo heritage, according to the biography on her congressional website.

A transition source familiar with the deliberations on the interior secretary pick pointed to Haaland's current position as vice chair of the House Committee on Natural Resources as showing her knowledge of and commitment to environmental protections and clean energy. The source also tells CNN they expect that Haaland will bring perspective on other issues like land and water conservation, renewable energy, public lands and federal parks.

The Washington Post was first to report Haaland's expected nomination.

While the Democratic majority in the House is remarkably thin, Speaker Nancy Pelosi gave her blessing to Haaland's selection. She issued a statement on Wednesday, which an aide tells CNN was intended to send a green light to the Biden transition and beyond that she supported her nomination.

"Congresswoman Haaland knows the territory," Pelosi said, "and if she is the President-elect's choice for Interior Secretary, then he will have made an excellent choice."

With Biden choosing Haaland for interior secretary, Pelosi will have only a three-seat vote margin heading into the 117th Congress in a Biden administration. This comes after Democrats lost incumbents across the country and failed to unseat a single House Republican in the November election.

Biden has chosen two other House Democrats -- Reps. Marcia Fudge of Ohio and Cedric Richmond of Louisiana -- to serve in his administration. While all three members are from safe Democratic districts, it will take time for them to be replaced.

A source familiar with the push to get Haaland nominated says that Massachusetts Sen. Elizabeth Warren, who was endorsed by the congresswoman during the presidential primary, offered her support for Haaland privately to Biden.

If confirmed, Haaland would be part of Biden's plan to tackle the climate crisis and reduce carbon emissions. Biden has proposed an ambitious climate agenda that seeks to end carbon emissions from power plants by 2035 and proposes broader public investment in green infrastructure, including $2 trillion for clean energy projects.

Haaland represents New Mexico's 1st Congressional District, which covers most of Albuquerque. She replaced Michelle Lujan Grisham, who vacated her congressional seat to run for governor.

The vice president of policy and strategy for the progressive think tank Data for Progress, Julian Brave NoiseCat, praised the President-elect's pick.

"We see our moms, our aunties and ourselves in Deb -- and now we're putting our greatest hopes as a people in her leadership. After four years of fossil fuel executives and lobbyists opening up Native lands and sacred sites to industry, the next Secretary of Interior will be a Laguna Pueblo woman who went to Standing Rock in 2016 and cooked for the people," NoiseCat, a progressive Native activist, said in a statement.

In 2016, Haaland traveled to North Dakota to take part in the protests over plans to build a pipeline underneath a key source of water for the Standing Rock Reservation.

Haaland graduated from a program created by Emerge New Mexico, which helps train Democratic women to run for office.

In 2012, she worked as the Native American vote director for President Barack Obama's reelection campaign. She later ran unsuccessfully as the Democratic nominee for lieutenant governor in 2014.

She would go on to become the chair of New Mexico's Democratic Party, and the first Native American woman in the country to lead a state party.

This story has been updated with additional information about Haaland.