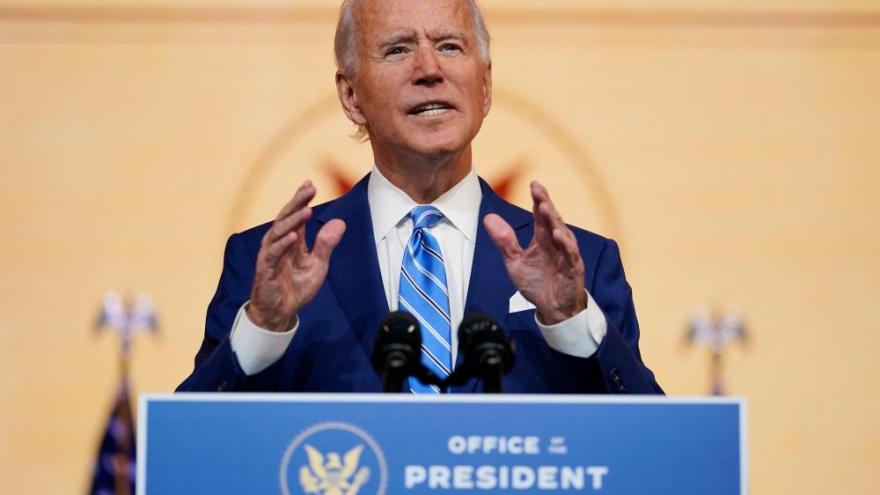 President-elect Joe Biden speaks at The Queen theater on November 25, 2020, in Wilmington, Delaware.

(CNN) -- President-elect Joe Biden and Vice President-elect Kamala Harris on Monday announced the senior leadership of the committee charged with planning and executing what will be an unprecedented presidential inauguration, as it is set to take place during a global pandemic.

Tony Allen, who worked as Biden's speechwriter when he was a senator, will take the helm as chief executive officer. Allen, who the inauguration team says will serve in his personal capacity, is currently the president of Delaware State University, an HBCU.

Maju Varghese will serve as executive director. Varghese was chief operating officer and senior adviser on Biden's 2020 presidential campaign, beginning in the primaries.

Erin Wilson and Yvanna Cancela will both serve as deputy executive directors. Wilson comes to the position with experience serving on Biden's campaign as the national political director throughout the primary and general election. Cancela, a Nevada state senator, voiced her support for Biden early in the presidential race and remained a constant presence at his campaign events in the state throughout the election.

It remains unclear whether President Donald Trump, who refuses to concede the election and continues to sow doubt about its outcome, will attend. But Republicans and aides are encouraging the President to consider attending Biden's swearing-in.

"I hope the President is there on Inaugural Day," Sen. Roy Blunt, the Missouri Republican who is responsible for overseeing January's inauguration, told CNN's Dana Bash on "State of the Union" Sunday.

While the construction of the parade platform for Biden's inauguration festivities is already well underway in Washington, people in charge of planning the event are preparing for a much different scene than in inaugurations past. The expectation is the event itself will be smaller and attendees will have to wear masks and maintain social distance within the ticketed parameters. It's expected the platform will host far fewer than 1,600 people, and there is also ongoing discussion about requiring Covid-19 tests for anyone who will stand on the main platform near the President-elect, who is 78.

Biden said over the summer that he did not want to wear a mask for his Inauguration ceremony and an aide tells CNN that this is still the President-elect's preference. The congressional committee did determine that everyone will be required to follow mask and social distancing guidelines.

And the choir that is usually positioned on risers behind the President may not happen at all, according to an aide. The Marine Band, which has played at every inauguration since 1801, is still scheduled to participate.