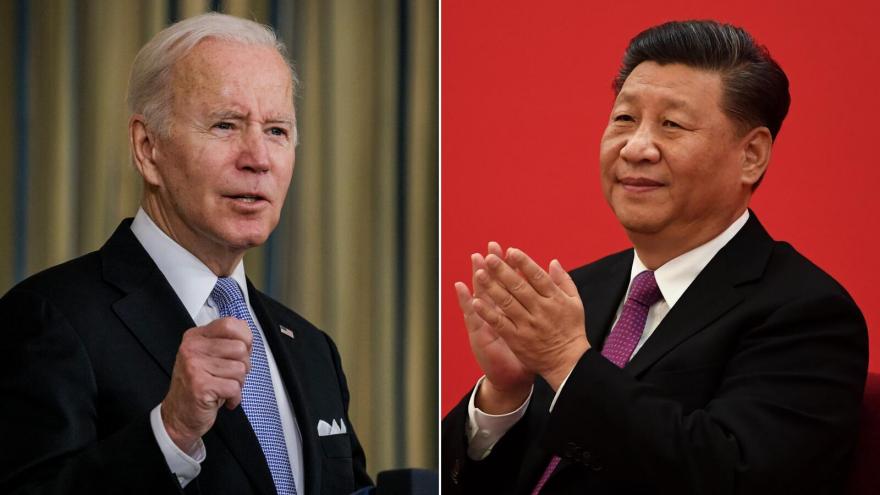 Biden's goal in speaking with Xi directly was partly to ascertain where exactly he stood.

(CNN) -- President Joe Biden sought to use a 110-minute video call on Friday to dissuade his Chinese counterpart from assisting Russia in its grinding war with Ukraine, a pivotal moment that could determine the trajectory of the bloody conflict.

Biden "described the implications and consequences if China provides material support to Russia" in his call with Chinese President Xi Jinping, the White House said.

"The President underscored his support for a diplomatic resolution to the crisis," the White House said.

Biden was "direct," "substantive" and "detailed," a senior administration official said in a call with reporters Friday afternoon.

The bulk of their discussion centered on the war in Ukraine, and the implications the crisis would have both on US-China relations and the "international order," the official said. Biden provided an assessment of Putin's actions in his conflict with Ukraine and "made clear" the implications and consequences of China potentially assisting Russia in its war.

The administration did not immediately publicly detail what those consequences would be, either in the written read out from the meeting or in the call with reporters.

Biden's goal in speaking with Xi directly was partly to ascertain where exactly he stood. China's statements about the war in Ukraine have stopped short of denouncing the invasion but also not offered explicit support. Xi has offered nominal backing for mediation efforts between Russia and Ukraine, but China has also fanned Russian disinformation about the conflict.

That all left Xi in a murky position, which the United States hoped to clarify through Biden's call.

Already, the US had warned European and Asian allies that China had expressed openness to providing Russia with military and financial assistance, which Moscow had requested as its halting invasion stretched into a third week. But officials said Beijing was still formulating how to respond, upping the stakes for Biden's intervention Friday.

China began offering its own account of the video call moments after it began, describing Xi's message to Biden on state television.

"We must not only lead the development of China-US relations down the correct path, but also shoulder our international responsibilities and make efforts for world peace and tranquility," Xi said on the video call, according to CCTV.

"The world is neither peaceful nor tranquil," Xi acknowledged. "The Ukraine crisis is something we don't want to see."

At the same time, the Chinese readout did not explicitly blame Russia for the conflict nor denounce Russian President Vladimir Putin's actions on the ground.

The United States has watched warily as Xi cultivates a close partnership with Putin, believing the alliance of authoritarian leaders is positioning itself to oppose the United States militarily and economically. During high-profile talks in Beijing last month, Xi and Putin sealed their affiliation, declaring in a lengthy statement the relationship was limitless.

Yet Russia's invasion of Ukraine has unsettled Chinese leaders, in part because the Russian military has suffered surprising losses and advanced more slowly than many expected. US officials have also said Xi was surprised by unity among Western and Asian nations in imposing punishing sanctions on Russia.

That combination of factors could lead China to reevaluate its potential involvement in the Ukraine war, US officials have said. That made the timing of Biden's call with Xi critical as the US works to contain the bloodshed in Ukraine.

Ahead of time, American officials declined to say what specific threats Biden might make to convince Xi to withhold support for Russia. There have been ongoing discussions within the administration about potential steps, including sanctions.

It is widely assumed Xi will secure a historic third term in power during the Communist Party's 20th National Congress in Beijing this fall. During such an important year, western experts believe Xi will be particularly mindful of the economic risks posed by secondary sanctions.

Trade between the European Union and China topped $800 billion last year, and US-China trade was over $750 billion, according to China's official data, while its trade with Russia was just under $150 billion. At the same time, China's economy is growing more slowly than it has in decades.

Ahead of their conversation, American officials made clear the stakes of the conversation.

"The ask is that China needs to stand on the right side of history," deputy secretary of state Wendy Sherman said on CNN.