Biden wants to reopen schools. Here's why that's so hard to do 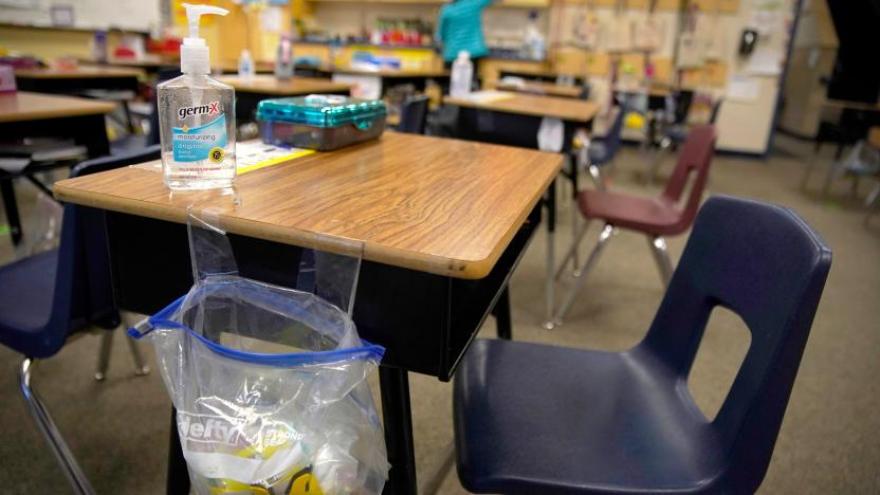 President Joe Biden pushes to get students back in schools. A teacher is pictured preparing her classroom before students arrive for school at Freedom Preparatory Academy on February 10, 2021 in Provo, Utah.

(CNN) -- Millions of students across the US are still out of the classroom after nearly a year, fueling a heated debate among school districts, teachers and parents about the best -- and safest -- way to educate kids even as President Joe Biden pushes to get them back in buildings.

Biden has pledged to reopen most schools for in-person instruction by May, but some experts fear the revised guidance published by his administration could make it harder for some schools to do so -- even by next fall.

Unlike other countries, the US leaves school control at the local level, and the challenges to providing in-person instruction are not the same everywhere, making it nearly impossible to create effective federal and even state-level guidance as the pandemic wears on.

Some buildings don't have enough space to spread students out, while others don't have adequate ventilation systems. In some places, school authorities face strong opposition from powerful teachers' unions.

The result has been a patchwork of in-person, hybrid and all-virtual instruction. Elementary school students in New York City, for example, returned to school for a few days a week in the fall, and the city brought middle school students back this week. After a bruising fight with the teachers' union, Chicago brought pre-K and special education students back into the classroom in mid-February, and elementary school and middle schools students will start returning in March. In San Francisco, no public school students have had in-person instruction since March, prompting the city to sue its own school district.

Districts that have returned kids to buildings have shown that it's possible to bring students back without devastating outbreaks. In fact, there's mounting evidence that Covid transmission in schools is low, even when there's a high rate of infection in the community.

Here are some of the pain points slowing down the process.

The US Centers for Disease Control and Prevention released highly-anticipated guidelines for reopening schools earlier this month, revising the recommendations made last summer under the Trump administration. The agency can't force schools to reopen but instead offers guideposts to help them do so safely.

But there's been little movement by all-virtual districts since then.

Instead, the Philadelphia School District didn't bring back pre-k through second-grade students last week as planned. California Gov. Gavin Newsom has yet to strike a deal with legislators and school groups after suggesting an agreement was imminent earlier in the month.

"Guidelines based on well documented studies would hopefully have led to some meaningful school openings," said Dr. Monica Gandhi, an infectious disease physician at the University of California, San Francisco.

The CDC advises districts to implement five key mitigation strategies -- masking, physical distancing, hand washing, cleaning and improving ventilation, and contact tracing and quarantine -- and to assess the level of Covid spread in the community, phasing in learning modes accordingly. It also says that testing and vaccinating teachers can provide an additional layer of protection.

Experts say the revised guidance is clearer than what was released last summer, but warn that giving more specificity can paradoxically create barriers to reopening.

Gandhi said she is particularly disappointed that the guidance emphasized a tie to community incidence and that it specified keeping six feet of distance -- which many districts don't have the space to do.

"In a way, being more clear can create specifics that may not fit everyone's parameters and justify closures," she said.

Dr. Lee Savio Beers, president of the American Academy of Pediatrics, agreed that there is some confusion about whether desks need to be six feet apart and over the tie to community transmission.

But she noted that the guidance also goes on to say that all schools have the option of providing in-person learning "at any level of community transmission."

"The new guidance reinforces our recommendation that with proper mitigation measures, schools can safely reopen even in areas of high transmission," Beers said.

The guidelines aren't completely preventing reopening. The West Virginia Board of Education passed a motion this week that requires schools to provide five days of in-person instruction to grades pre-K to 8 by March 3 -- regardless of the rate of transmission in the community. High schools can continue to provide a hybrid model of instruction if the infection rate is high since older students may be more likely to transmit the virus.

Keeping desks six feet apart could be the biggest hurdle in bringing students back full-time. Many schools simply don't have the space. Some schools in Colorado, Maine and Texas have experimented with moving classes outdoors.

"I don't think schools that were closed this past fall are going to reopen next fall. This is 100% about distancing. Community spread should be down by then, but the distancing problem will still be there," said Karen Vaites, a New York mom and literacy advocate who is helping organize the parent-led movement Open Schools across the country.

Epidemiologist Tracy Hoeg was also surprised to see the CDC recommend six feet of distancing and to tie reopening to community spread. She's the senior author of a widely cited study of 17 Wisconsin schools that reopened for in-person learning in the fall.

The study found few instances of in-school transmission among students and staff members -- even when the percentage of people testing positive in the community was as high as 40%. While masking was required, the K-8 students were mostly between three to six feet apart.

Only seven of the 191 Covid cases reported were transmitted in school. There were not cases transmitted between a student and a teacher.

"I would have said three to six feet apart is sufficient for K-8 students, according to our data," Hoeg said.

"I don't think it's smart to say reopening should be based on community transmission rates. It's like we're backpedaling," she added.

The Wisconsin study is not the only one that found schools were safe when K-8 students were kept three feet apart. A North Carolina study had similar results. The World Health Organization recommends a distance of one meter, or just over three feet.

In Ohio, where there have also been school reopening success stories, the state also recommends keeping at least three feet between desks, though six feet is ideal.

Some state and city leaders are clashing with union leaders, who argue that teachers want to return to school as long as it's safe. They're calling for improvements to ventilation systems, ramped up Covid testing, accommodations for high-risk teachers and vaccine prioritization before returning to the classroom -- and the funding necessary to make those adjustments. A bill making its way through Congress and backed by Biden would provide $130 billion to K-12 schools.

In New Jersey, the Montclair district canceled restarting in-person learning in January when the teachers' union cited safety concerns. The district is now suing the union. The city of San Francisco has also sued the school district there for failing to come up with a reopening plan.

In Chicago, negotiations over a reopening plan were particularly fraught as teachers argued the schools are underfunded to begin with. After weeks of talks, the teachers' union accepted an agreement to reopen earlier this month, bringing pre-k and special education students back into the classroom last week. Elementary school and middle schools students will start returning in March.

In some places, including Los Angeles, union leaders say they don't want schools to reopen before their staff is entirely vaccinated.

CDC Director Rochelle Walensky has said vaccines don't need to be a requirement, but that teachers should be prioritized.

Some or all of teachers in 28 states and Washington, DC, are eligible for the vaccines. There are 22 states where teachers are still not eligible to receive the vaccine as a specific group, although some educators might fall into the current age group that state is vaccinating.

About 82% of educators had not been vaccinated at the start of February, according to a survey conducted by the National Education Association, the largest teachers' union in the country.

Biden came into office pledging to open most schools during his first 100 days, an ambitious goal from the start. The federal government can't mandate schools to reopen and it's unclear exactly how the administration will evaluate success.

Earlier this month, White House press secretary Jen Psaki said Biden was committed "to ensuring schools are open five days a week" -- once the proper safety measures are in place. Two days earlier she suggested that "teaching at least one day a week in the majority of schools by day 100" might be enough to meet the goal.

About 26% of K-12 students are attending schools with a hybrid schedule, according to the private data tracking company Burbio. In those situations, students may attend some days in-person, but classes rotate so that students can remain socially distant in the classroom. A California South Bay area district, for example, is considering bringing students back into the classroom for just one hour a week to start.

Districts often move to all-virtual instruction when there are too many cases reported, though the number of cases that requires a shut down greatly varies by district. When cases spiked over the holidays, about 55% of students' schools were virtual-only, according to Burbio.

As of February 21, about 31% of K-12 students were attending all-virtual schools. Nearly 43% were enrolled in schools that are open every day for in-person instruction.