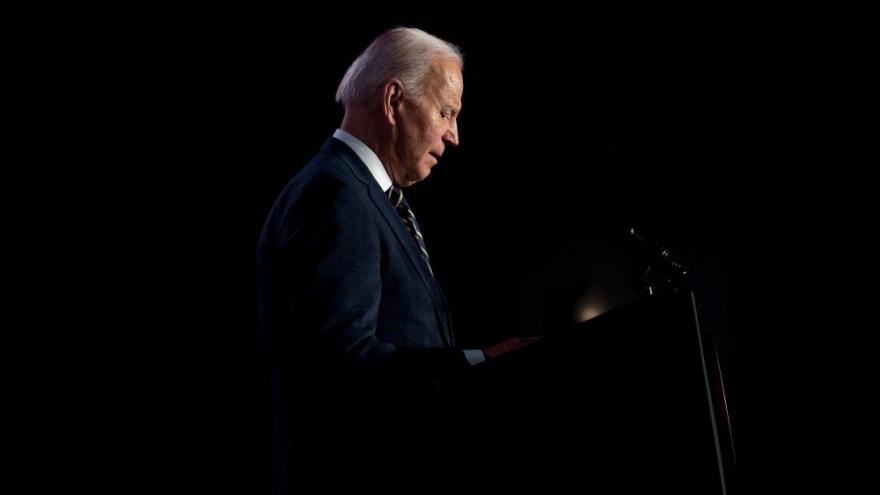 President Joe Biden says Ukrainian President Volodymyr Zelensky was "convincing" and "passionate" in his address to US Congress.

(CNN) -- President Joe Biden on Wednesday announced an additional $800 million in security assistance to Ukraine as he sought to answer his Ukrainian counterpart's impassioned call for help and leadership delivered to Congress earlier in the day.

"The world is united in our support for Ukraine and our determination to make (Russian President Vladimir) Putin pay a very heavy price," Biden said before signing a presidential memorandum at the White House to deliver the military assistance. "America is leading this effort, together with our allies and partners, providing an enormous level of security and humanitarian assistance that we're adding to today and we're going to continue to do more in the days and weeks ahead."

The new details about the US' military assistance to Ukraine comes hours after Ukraine's President, Volodymyr Zelensky, addressed US members of Congress, renewing his calls for more assistance as his homeland continues to battle Russian military's invasion.

Biden, in his remarks on Wednesday, attempted to level with Americans about the long road ahead in the war.

"I want to be honest with you," the President said. "This could be a long and difficult battle. But the American people will be steadfast in our support of the people of Ukraine in the face of Putin's immoral, unethical attacks on civilian population."

The US will specifically provide Switchblade drones to Ukraine, two sources familiar with the matter told CNN. The small, portable, so-called kamikaze drones carry warheads and detonate on impact. The smallest model can hit a target up to 6 miles away, according to the company that produces the drones, AeroVironment. It's unclear which model the US will send to Ukraine.

The Switchblade drones were added to Ukraine's extensive list of requested military and technological assistance after Ukrainian officials consulted with congressional partners over the weekend on a draft of the list.

The assistance stops short of the no-fly zone or fighter jets that Zelensky has said are necessary to sustain Ukraine's fight against Russia.

News of the additional assistance, which was first reported by The Wall Street Journal, comes as the White House continues to face intense pressure from Congress and Zelensky to find new ways to aid Ukraine.

The Ukrainian President, who remains in his country, delivered an impassioned message for Biden at the end of his remarks to Congress.

Biden said later Wednesday that he watched Zelensky's speech from the White House residence, calling it "convincing" and "significant."

The $800 million in security assistance comes from the massive spending bill the President signed into law on Tuesday, which includes $13.6 billion total in new aid to Ukraine.

The Biden administration will look to get these hundreds of millions in new aid to Ukraine as quickly as possible, with the President noting Tuesday that it is becoming "exceedingly difficult" to get new supplies into Ukraine, though they are still able to do so.

The Biden administration is also continuing to develop sanctions targeting top Russian officials and those in President Vladimir Putin's inner circle, with plans to ramp up the number of targets in the coming days and weeks, according to multiple US officials.

The process has been ongoing, and has taken into account specific suggestions of targets provided by top Ukrainian officials, including Zelensky, the officials said. In a call with Biden last week, Zelensky laid out a more specific range of targets for individual sanctions, one of the officials said. The administration is currently working to address those requested targets.

In his virtual remarks to Congress, Zelensky went further when he requested the US impose sanctions on all Russian politicians who continue to support the government. While some Zelensky requests, including the implementation of a no-fly zone, remain off the table for Biden, the sanctions are viewed by the administration as a tool they can readily deploy.

Since the Russian invasion of Ukraine, the US has slapped sanctions on dozens of top Russian officials and oligarchs, as well as their family members. Biden also signed off on targeting Putin directly with individual sanctions, in coordination with the European Union and United Kingdom.

In a sign of the speed with which US officials are looking to move to support Ukraine, the administration has sent about $300 million of the $350 million Biden recently authorized for Ukraine in a little over two weeks.

As Russia's invasion has raged on, Zelensky has pressured Biden and NATO to do more, expressing frustrations over Western allies' concerns about provoking Putin. He renewed those calls on Wednesday.

"Russia has turned the Ukrainian sky into a source of death for thousands of people," he told Congress as he described the use of missiles, bombs and drones by Russian troops to inflict brutal and deadly attacks on his country. "We are asking for a reply to this terror from the whole world."

"To create a no-fly zone over Ukraine to save people, is this too much to ask?" he said. Zelensky went on to say, "You know how much depends on the battlefield, on the ability to use aircraft, powerful strong aviation to protect our people, our freedom, our land, aircraft that can help Ukraine, help Europe. You know they exist and you have them, but they are on Earth not in the Ukrainian sky."

"I need to protect our sky," he said.

This story has been updated with additional reporting on Wednesday.