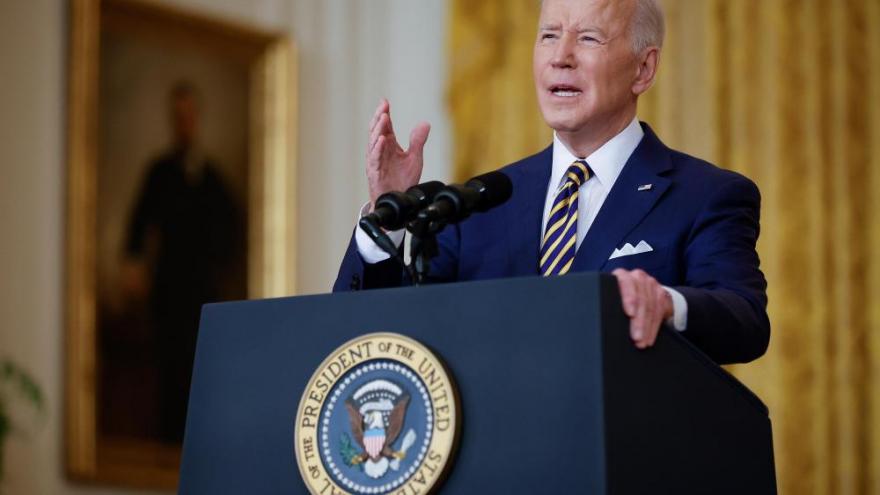 President Joe Biden makes an opening statement during a news conference in the East Room of the White House on January 19, 2022 in Washington, DC.

Semiconductor shortages have been a persistent thorn in the Biden administration's side. The shortage of the chips -- which are essential for the production of smart phones, medical equipment, cars and a number of household appliances -- has hamstrung the administration's economic recovery effort and contributed most notably to an increase in automobile prices, which account for one-third of the annual price increases in the core consumer price index.

Estimates from consulting firm AlixPartners put the cost of the global chip shortage at $210 billion in lost sales for the auto industry alone.

According to a fact sheet shared with CNN, the White House has been working with Congress, international partners and the private sector "to expand U.S. chip manufacturing capacity."

As part of the administration's efforts, Intel is expected to announce a new $20 billion factory outside Columbus, Ohio, creating 7,000 construction jobs and an additional 3,000 permanent jobs.

The Intel announcement is the latest in a series of efforts to expand domestic semiconductor manufacturing.

In a statement Friday, Commerce Secretary Gina Raimondo applauded Intel's announcement, calling it "a big win for Intel, for American manufacturing, and for American consumers who can look forward to lower prices as we bring home production of semiconductors that keep our economy running."

According to an estimate from the Semiconductor Industry Association, the industry has announced nearly $80 billion in new investments in the US through 2025 since the beginning of 2021, including a $17 billion Samsung factory in Texas, $30 billion in investments from Texas Instruments and more.

The President raised the issue of global semiconductor shortages during an October summit on the margins of the G20 summit in Rome. During the meeting, Biden said that the way to solve the supply bottlenecks would be ending the Covid-19 pandemic, arguing that it's "the ultimate key to unlocking the disruptions."