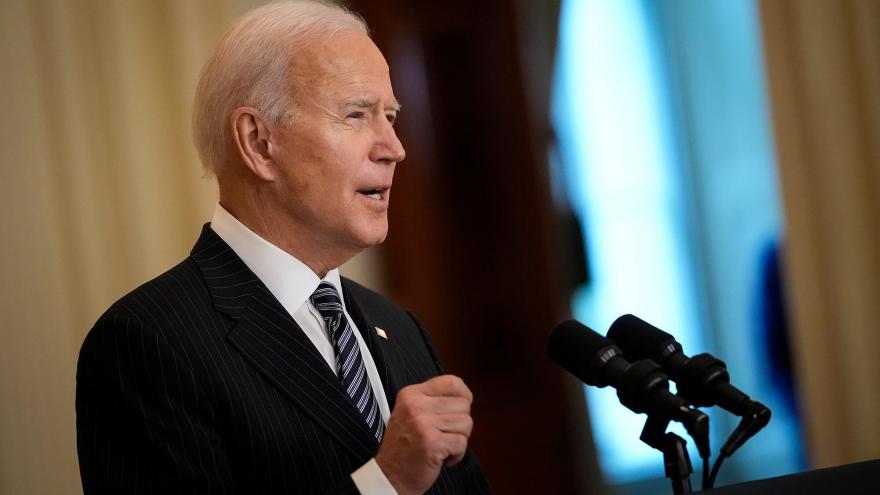 President Joe Biden, seen here on March 18, is not scheduled to toss out the Opening Day first pitch for the Washington Nationals.

(CNN) -- President Joe Biden is not scheduled to toss out the Opening Day first pitch on Thursday for the Washington Nationals, White House press secretary Jen Psaki said on Tuesday. But she added that baseball fans will be hearing from him in the next few days.

"I know the President's eager to get out to Nationals' stadium. Many beautiful days, many beautiful baseball games ahead this spring. It's not on the President's schedule this week but I certainly expect that baseball fans will be hearing from him in next couple of days," Psaki said during the White House briefing.

Earlier Tuesday, the Nationals told The Washington Post Biden would not participate in the opening pitch.

Nearly every sitting US president since William Howard Taft 1910 has thrown out a first pitch at a baseball game during their time in office. So far, President Donald Trump is the only president not to participate in the tradition.

After several news outlets called the 2020 presidential race for Biden in November, the Nationals quickly invited him to the mound.

"We look forward to hosting President-Elect Biden on Opening Day of the 2021 season," the team tweeted last fall. "We're excited to continue the long-standing tradition of sitting Presidents throwing out the first pitch at the home of the national pastime in our nation's capital."

Psaki did not expand on why Biden will not participate, and the President's public schedule does not indicate that there are scheduling conflicts on Thursday evening, when the Nats' opening day game is scheduled to take place. The only publicly disclosed event is the President's lunch with Vice President Kamala Harris.

Thursday's game is expected to host 5,000 in-person spectators -- about 12% of Nationals Park's capacity. Masks will be required.

The Washington Nationals did not respond to a CNN request for comment.

Biden, a Phillies fan, was a baseball player throughout his youth. He was entered into the Little League's Hall of Excellence in 2009. He threw out the ceremonial first pitch at the Baltimore Orioles opening day in 2009, while he was vice president.

In 2020, Trump mocked Dr. Anthony Fauci's opening day pitch for the Nationals in 2020 and later claimed he would be throwing out the first pitch at a New York Yankees game later that summer. Trump tweeted that he would be postponing his visit to Yankee Stadium, tweeting that he wouldn't be able to go because of his "strong focus" on the coronavirus pandemic. The pitch was never rescheduled.

Trump said in 2019 that he wouldn't throw out a first pitch at the first World Series held in Washington, DC, that year because he didn't feel comfortable throwing a ball while wearing a bulletproof vest.

"I don't know. They gotta dress me up in a lot of heavy armor. I'll look too heavy. I don't like that," Trump joked when asked if he'd throw out the first pitch at Game 5, referencing the protective vest he'd likely have to wear to walk onto the mound.

Though he didn't throw a pitch, Trump did attended one of the World Series games in Washington that year.

When cameras panned to Trump and beamed his image onto National Park's video screen, he received a mix of cheers and boos. Some of the crowd later chanted, "Lock him up."