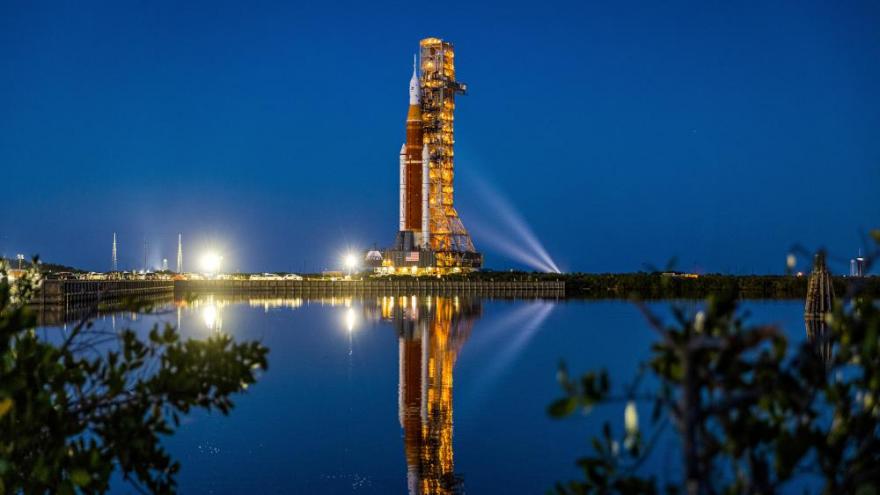 (CNN) -- The Biden administration's request for the NASA budget in 2023 is $26 billion, the largest request for science in the space agency's history, NASA Administrator Bill Nelson announced Monday.

The figure is 8% more than the enacted federal spending levels, or the appropriation bill from fiscal year 2022, Nelson said.

"Greater than a number, statistic, or fact is what the President's budget request represents," Nelson said in a statement.

"This budget reflects the Biden-Harris Administration's confidence in the extraordinary workforce that makes NASA the best place to work in the federal government," Nelson said. "It's an investment in the businesses and universities that partner with NASA in all 50 states and the good-paying jobs they are creating. It's a signal of support for our missions in a new era of exploration and discovery."

The request was submitted to Congress Monday as part of President Joe Biden's proposed budget for fiscal year 2023. NASA officials believe that Biden's request will allow NASA to continue investments in the Artemis program, which aims to land the first woman and the first person of color on the moon in 2025, as well as provide more research into the climate crisis and promote diversity, equity and inclusion.

The largest chunk of the $26 billion budget request would go toward the Artemis program.

Artemis is considered to be the program that will not only return humans to the moon and create a sustainable, long-lasting lunar presence, but will also prepare NASA for the first human exploration of Mars.

"Our goal is to apply what we've learned living and operating on the moon and continue then out into the solar system," Nelson said. "Our plan is for humans to walk on Mars by 2040."

The $4.7 billion would be used in support of lunar missions, like funding for the Orion spacecraft and Space Launch System rocket that will land astronauts on the moon. And $1.5 billion will go toward funding new competition to develop sustainable lunar landers, which was announced last week by NASA.

"Remember what happened after the Apollo program? You had several generations of engineers and scientists and technicians that all came out as a result of the extraordinary work in Apollo," Nelson said. "But now, the Apollo generation has passed the torch to the Artemis generation. And this new generation is preparing to push the boundaries of what we know to be possible."

The budget request also includes $2.4 billion that could fund climate and weather monitoring, using satellites to observe our planet and other research to create a better understanding of the climate crisis.

The President's budget will empower NASA to launch an Earth Information Center, Nelson said. The center will monitor greenhouse gases and other conditions on Earth in coordination with other agencies and partners, integrating data from satellites and telescopes to measure water, land, ice and the atmosphere on our planet.

Given NASA's ongoing commercial partnerships, the agency has requested $1.4 billion for space technology research and development that could reduce costs, enhance mission capabilities and create more jobs for the US commercial space industry.

"Our partnership with industry has already allowed more scientific research, and in December, NASA signed agreements with three American companies to develop designs of space stations and other commercial destinations, first in low-Earth orbit and then who knows what, out of (low-Earth orbit)."

This budget provides funding for these efforts. It enables a commercial economy in low-Earth orbit, where the US will maintain an uninterrupted presence after the planned retirement of the International Space Station.

Noting that the first "A" in NASA stands for aeronautics, Nelson said $970 million of the budget would go toward aeronautics research that could improve aviation flights for everyone. This includes reducing the impact of the aviation industry on global climate and helping develop next-generation aircraft that will be safer, smoother, cleaner and quieter.

Lastly, there is $150 million to support NASA's Office of STEM Engagement, providing more support for educational efforts and activities, especially in underserved areas.