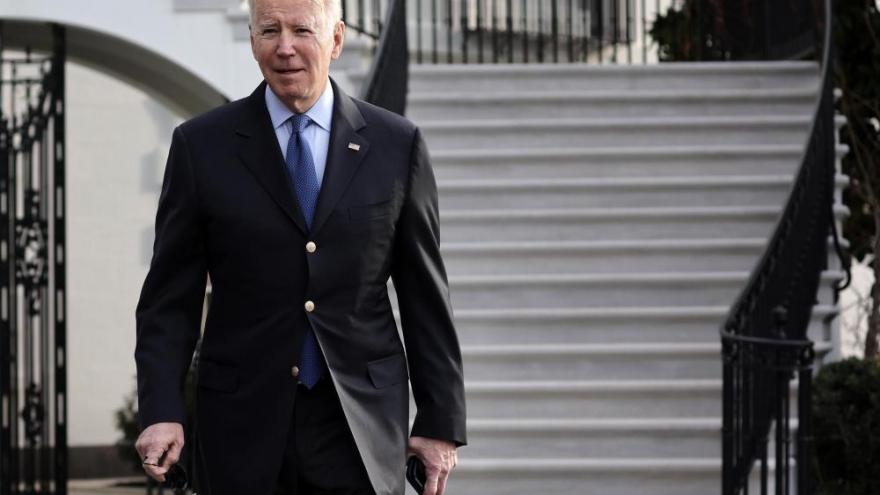 President Joe Biden is pictured at the White House prior to traveling to Europe on March 23. Biden's proposed budget for the fiscal year 2023 includes billions to counter Russian aggression and a new tax on America's wealthiest.

(CNN) -- President Joe Biden unveiled his fiscal year 2023 budget proposal on Monday, and while it includes increased funding for security and reduces the deficit, officials admit inflation could continue to cause problems for the overall economy.

At a White House event to announce the budget, Biden said that the proposal was composed of three main tenants: fiscal responsibility, safety and security, and investments to "build a better America."

At the podium alongside Shalanda Young, director of the Office of Management and Budget, Biden sought to mark a shift in his administration's approach to federal spending from earlier in the pandemic, calling out his predecessor, former President Donald Trump, for running up the federal deficit throughout his time in office.

"After my ... predecessor's fiscal mismanagement, we're reducing the Trump deficits and returning our fiscal house to order," the President said.

Biden said his proposed $1.3 trillion budget cut would stand to be "the largest one-year reduction in the deficit in US history."

As Russia's invasion of Ukraine continues, the proposed budget includes $6.9 billion for the European Deterrence Initiative and NATO and "countering Russian aggression to support Ukraine."

The President claimed his budget proposal "will be among the largest investments in our national security in history."

The national security spending proposal has already sparked criticism on both sides of the aisle.

Senate Minority Leader Mitch McConnell said Biden's budget was "woefully short on defense spending," arguing that at a time of high inflation, the proposed 4% increase in military spending amounts to an "actual cut in funding for our armed forces in real dollars." House and Senate liberals, meanwhile, have balked at Biden's request, with Vermont Sen. Bernie Sanders arguing that "we do not need a massive increase in the defense budget" when the US is "already spending more on the military than the next 11 countries combined."

The President acknowledged the critiques in Washington that have arisen over the proposal's defense spending, saying, "Some people don't like the increase, but we're in a different world today. America is more prosperous, more successful and more just when it is more secure."

His budget calls for $3.2 billion in "discretionary resources for state and local grants" for communities to hire more police officers, and an additional $30 billion in "mandatory resources to support law enforcement, crime prevention and community violence intervention."

Biden on Monday dismissed the suggestion that his budget's allocation for crime intervention was a political move.

"Isn't that kind of fascinating? When I was first elected, I was being beat up because I supported the police too much for the previous 30 years. No, that's what I think," Biden said when asked if the additional funding was included because of political pressure from Republicans saying Democrats are too soft on crime.

"Stepping back, what this budget shows is that we can grow the economy from the bottom up and middle out and invest in the American people, and that we can do it in a smart fiscally responsible way," Shalanda Young, director of the Office of Management and Budget told reporters in a call on Monday morning.

Officials say the estimates on inflation reflected in the budget were set in November -- before Russian President Vladimir Putin's invasion of Ukraine, which has strained the economy and increased prices across the board.

"The invasion will likely put upward pressure on energy and food prices that in turn could reinforce inflation that was already an issue prior to the invasion due to the pandemic supply chain constraints and as far demand for goods," Rouse said. "The economics forecast, we if we were updating today, we would look at it somewhat differently."

Among the other requests is $10 billion in new funding for election administration, which they say is necessary to "strengthening American democracy" while it faces unprecedented threats. The money for state and local officials, if approved by Congress, would be spent over 10 years.

"Federal funding for the equipment, systems, and personnel that comprise the Nation's critical election infrastructure has been episodic or crisis-driven," the White House budget proposal said. But the $10 billion request aims to "provide state and local election officials with a predictable funding stream for critical capital investments and increased staffing and services."

One notable plank of the proposal includes "making (mail-in) ballots postage-free," which is a priority for left-leaning voting rights groups. Voting by mail has become increasingly popular, especially after the pandemic-plagued 2020 election, but it's up to states to decide whether voters must pay for their own stamps. Most of the states that offer it are run by Democrats.

Biden also wants to increase the Justice Department's civil rights budget by $101 million, for a new total of $367 million. These funds would support, among other things, efforts to protect voting rights. In the past year, the Justice Department sued GOP-run states like Texas and Georgia over voting rules and redistricting maps that allegedly discriminate against minorities.

The budget also includes funding for the President's re-branded "Building a Better America" proposal, which is stalled in Congress, but it "does not include specific line items for the investments associated with that future legislation," Young said.

Asked if the funding meant that stalled negotiations were once again moving, Young said what the White House was not getting "ahead of congressional negotiations."

"The deficit neutral reserve fund is meant to leave the space, the revenue specifically, to leave congressional negotiators the room to do what President Biden has asked. He has asked for legislation that reduces costs for Americans and reduces the deficit," she said.

In order to make those investments and reduce the deficit, the budget calls for a new "minimum tax on billionaires" -- which includes more than just billionaires, and applies to anyone worth more than $100 million -- that would ensure the wealthiest 0.01 percent of households pay at least "20 percent of their total income in federal income taxes." It also increases the rate corporations pay on profits and contains "contains additional measures to ensure that multinationals operating in the United States cannot use tax havens to undercut the global minimum tax," the White House said.

Chair of the Council of Economic Advisers Cecilia Rouse told reporters that Biden policies would decrease the expected deficit in the current fiscal year of 2022 to "$1.3 trillion smaller than it was in fiscal year '21, and we believe the policies in this budget will further reduce the deficit by another trillion over the next decade." But much of that deficit reduction comes from temporary programs in the American Rescue Plan expiring.