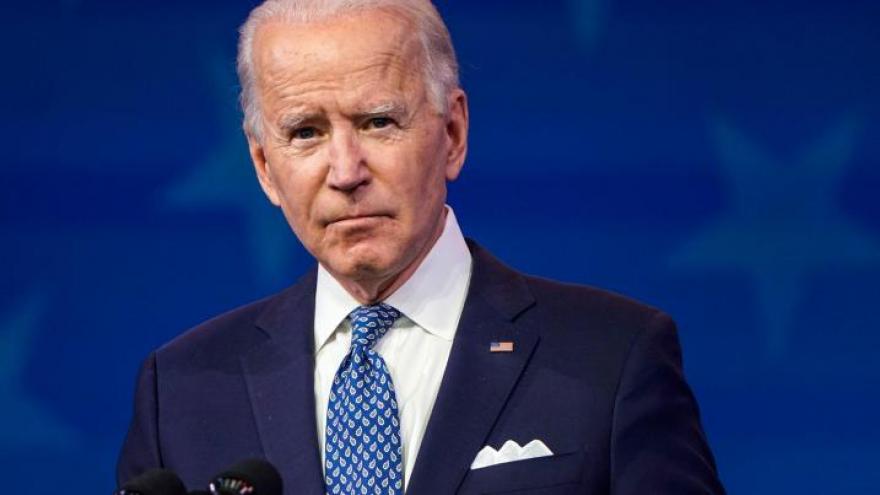 President-elect Joe Biden, seen here in 2020, and his Covid-19 task force are treating the pandemic as a national security-level crisis, but some major details are still being sorted out.

(CNN) -- President-elect Joe Biden and his Covid-19 task force are treating the pandemic as a national security-level crisis, but with just days to go before inauguration, some major details of how they will ramp up vaccine distribution to the level promised are still being sorted out, multiple sources tell CNN.

The Biden administration will inherit a public health emergency that is spiraling out of control -- overwhelming hospitals and breaking daily new cases and death records -- as new variants of the virus that appear to be more transmissible are showing up across the country. The incoming team has been hamstrung by a lack of cooperation from the Trump administration, which has so far failed to distribute vaccines at a rapid clip.

Biden has laid out a timeline for 100 million shots in the first 100 days. As his January 20 swearing-in approaches, sources familiar with the task force's work tell CNN that specifics on everything from coordination between the federal and state governments, potential deployment of the National Guard and the role of private pharmacies are still actively being debated.

CNN reported on Friday that the Biden administration's aim is to release nearly every available dose of the coronavirus vaccine when he takes office -- a break with the Trump administration's strategy of holding back half of US vaccine production to ensure second doses are available.

Biden's team is confident that if they release nearly all available doses of Covid-19 vaccine immediately, people will be able to complete the two-dose regimen as planned, Dr. Celine Gounder, a member of Biden's coronavirus advisory board, said Saturday.

"I want to be very clear that we are not recommending that the second dose be delayed, so people should still get their second dose of the Pfizer vaccine at 21 days, of the Moderna vaccine at 28 days," Gounder told CNN's Ana Cabrera.

Sources described the mood among Biden's senior-most advisers when it comes to the virus as one of absolute "soberness." That sentiment comes directly from the top, according to a source familiar with the Biden team's thinking, with Biden himself deeply worried about the array of public health challenges his administration is about to acquire and asking transition aides to add more public health officials to the Covid team.

Those working with the Biden Covid team said among the most urgent tasks for the task force has been trying to ensure that there are enough doses of the vaccine for distribution. One clear concern repeatedly expressed by the Biden team, sources said, is that Operation Warp Speed appeared to have been largely focused on the development of vaccines but neglected to develop a streamlined plan and process for actually getting vaccine shots into arms. There is also concern about vaccine hesitancy, which the Biden team has said it would try to tackle in part with an ongoing public education campaign.

Democratic Rep. Andy Kim of New Jersey, who sits on the bipartisan House Select Committee on the Coronavirus Crisis, said dealing with the Trump administration and the Biden Covid task force on matters related to the virus has presented a night and day contrast.

"They were constantly coming back to me and saying everything's fine, it's under control," Kim said of his communications with members of the Trump administration about Covid. "The Biden team has a soberness of the moment and of understanding that this is one of the toughest and darkest times in American modern history."

Both Kim and another Democrat in close touch with the Biden team on the virus said Covid-19 was being treated as a national security threat. Earlier in the transition process when the Trump administration was declining to share critical information about the virus with the transition team, "they were putting access to Covid information just as high as national security," a Democratic member of Congress told CNN.

"I think they are incredibly cognizant of the fact this is a national security issue and it's a global health security issue," said Dr. Nicole Lurie, a volunteer adviser to Biden's team and a former assistant secretary for preparedness and response at the Department of Health and Human Services.

But if the incoming Biden team is preparing to tackle Covid-19 as one of its most urgent national crises, there is plenty of trepidation about its readiness -- particularly when it comes to the enormous challenge of accelerating the pace of vaccine distribution.

"It's like the California wildfire, and all you have is one firetruck," a source familiar with the Biden team's thinking said.

Biden recently floated the idea of establishing thousands of federally run community vaccination centers "located in high school gyms or NFL football stadiums" with potential help from FEMA, the CDC, as well as the US military and the National Guard. The President-elect has also vowed to send in mobile units to vaccinate those in hard-to-reach communities, and use the Defense Production Act to speed up vaccine production.

One source close to Biden's Covid task force and privy to the team's planning said a number of different ideas to accomplish mass vaccination are being discussed, though those plans remain in flux.

The source said even with a lot more aid from the federal government, individual states would still call the shots depending on each of its vaccination needs and how they choose to utilize the serves of the government.

Private pharmacies would also continue to have a large role to play, that source said. Some of the challenges on that front include simply having enough medical personnel on site to observe patients for 15 to 30 minutes after they've been vaccinated, which requires a lot of manpower and physical space.

Biden's publicly stated goal of getting 100 million shots done in his first 100 days in office is seen as "doable," this source said, but will require the federal government, individual states and private companies to work together seamlessly -- a dynamic that currently does not exist now, they said.

The mutation of the Covid-19 virus is also something the Biden Covid task force is watching carefully, as scientists and researchers scramble to figure out what exactly the variants could mean in terms of spread of the virus and efficacy of the approved vaccines against them.

"They're worried" is how one lawmaker simply described the outlook in the Biden world about the variants, though they emphasized that there is no reason right now to be pessimistic about whether the currently approved vaccines are effective against the mutated strains.

The Biden transition team did not respond to CNN's questions about how the Covid task force is currently examining the virus variants and what they might mean for vaccinations, and whether the team views US hospitals being overwhelmed and record-breaking death tolls as a sign of a newly dire phase of the pandemic.

Lurie, the volunteer adviser to the Biden Covid-19 team, told CNN she believes they will put a broader emphasis on supporting vaccination campaigns globally and using the national security infrastructure to help identify new variants emerging across the globe and look at the implications for treatments and vaccines.

"We could vaccinate everyone in this country and still have a real problem with coronavirus if new variants arrive," Lurie said.