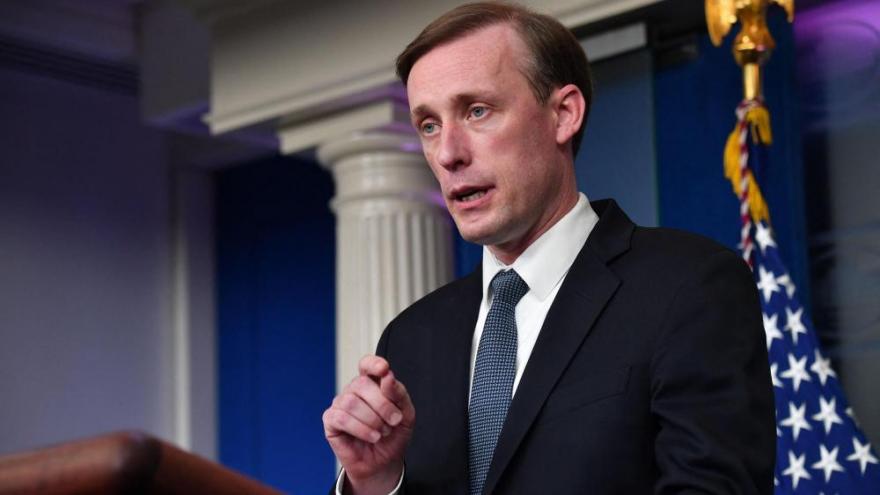 US national security adviser Jake Sullivan warned Americans in Ukraine on Friday to leave within one to two days, spelling out what a Russian attack on the country could look like -- and that civilians could die.

(CNN) -- US national security adviser Jake Sullivan warned Americans in Ukraine on Friday to leave within one to two days, spelling out what a Russian attack on the country could look like -- and that civilians could die.

"Any American in Ukraine should leave as soon as possible, and in any event in the next 24 to 48 hours," Sullivan said. "We obviously cannot predict the future, we don't know exactly what is going to happen. But the risk is now high enough and the threat is now immediate enough that this is what prudence demands."

"If a Russian attack on Ukraine proceeds, it is likely to begin with aerial bombings and missile attacks that could obviously kill civilians without regard to their nationality. A subsequent ground invasion would obviously involve the onslaught of a massive force."

Despite that message, Sullivan added that it's not clear if Putin has decided to invade Ukraine.

"I want to be crystal clear. A final decision has not been taken by President Putin, but we have a sufficient level of concern based on what we're see on the ground and what our intelligence analysts have picked up that we're sending this clear message and it remains a message that we have now been sending for some time. And it is an urgent message because we're in an urgent situation," Sullivan said.

Later, he said there was a "very distinct possibility" that Russia would act militarily, but couldn't pinpoint when or how.

"I'm not going to get into intelligence information, but if you look at forces in both Belarus and in Russia on the other side of the Ukrainian border from the north and from the east, the Russians are in a position to be able to mount a major military action in Ukraine in day now," he said.

The fears over an invasion has led to the US planning to pull its impartial observers from the Organization for Security and Cooperation in Europe mission in Ukraine as the security environment deteriorates, two sources familiar with the discussions said.

The Biden administration is also discussing the possibility of further reducing the number of staff at the US Embassy in Kyiv and pulling other US government employees out of Ukraine amid new US intelligence suggesting that Russia could move to attack Ukraine prior to the end of the Beijing Olympics next week.

The US has estimated that Russia has more than 100,000 troops near the Ukraine border, with thousands added just this week, according to an administration official

"We're continuing to draw down our embassy," Secretary of State Antony Blinken said during a press conference on Friday. "We will continue that process. And we've also been very clear that any American citizens who remain in Ukraine should leave now."

OSCE observers' "main tasks are to observe and report in an impartial and objective way on the situation in Ukraine; and to facilitate dialogue among all parties to the crisis," according to their website. They also have been responsible for tracking ceasefire violations in eastern Ukraine.

The US last month ordered the departure of diplomats' family members from the US Embassy in Kyiv and allowed non-essential personnel to leave on a voluntary basis.

CNN has reached out to OSCE and State Department for comment.

Biden on Thursday urged Americans in Ukraine to leave the country immediately, warning that "things could go crazy quickly" in the region.

"American citizens should leave now," Biden said in an interview that was taped Thursday with NBC News' Lester Holt.

The President spoke with the leaders from Canada, the United Kingdom, France, Germany, Italy, Poland, Romania, NATO, the European Commission, and the European Council in a call that lasted more than an hour Friday morning.