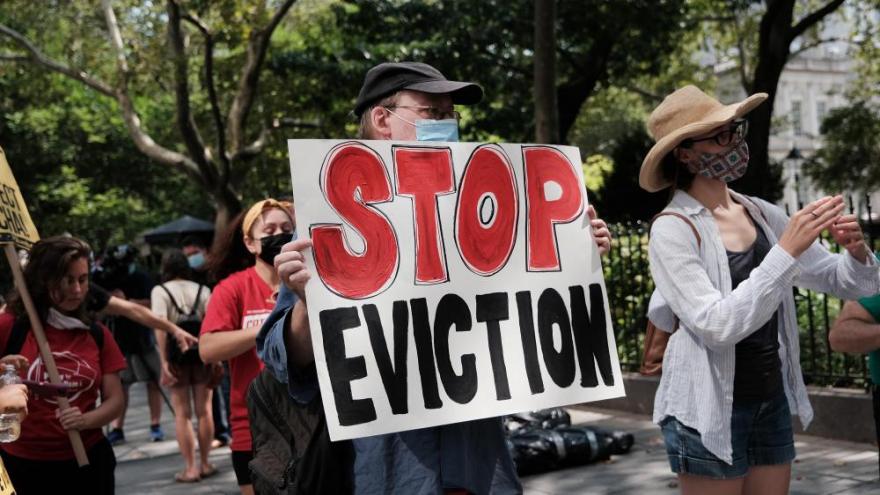 Activists hold a protest against evictions near City Hall on August 11 in New York City.

(CNN) -- A federal judge in Washington, DC, on Friday allowed the Biden administration's revised eviction moratorium to remain in place, but acknowledged the moratorium faces an uncertain legal future.

US District Judge Dabney Friedrich denied a request from various landlord associations that she block the moratorium.

Though the Supreme Court had voted 5-4 in June to allow an earlier iteration of the moratorium to continue, Justice Brett Kavanaugh, the swing vote in favor of the moratorium, indicated at the time he would not uphold it if was extended again past July 31.

Nonetheless the US Centers for Disease Control and Prevention issued a slightly tailored extension of the moratorium last week, prompting the landlords to seek Friedrich's intervention.

Friedrich, on Friday, said her hands were tied because of an existing order by an appellate court, from the previous round of litigation, allowing the moratorium to continue.

"The Supreme Court did not issue a controlling opinion in this case, and circuit precedent provides that the votes of dissenting Justices may not be combined with that of a concurring Justice to create binding law," she wrote. She said the challengers will need to turn to the appellate court to get the moratorium blocked.

White House press secretary Jen Psaki on Friday applauded the decision, saying in a statement that the Biden administration believes it is "a proper use of its lawful authority to protect the public health."

"We are pleased that the district court left the moratorium in place, though we are aware that further proceedings in this case are likely," Psaki said.

Psaki repeated the President's call for state and local officials and judges to "issue local eviction moratoriums and move aggressively to distribute the $46.5 billion in emergency rental assistance funds" from Covid relief packages.

The landlords will file an appeal, perhaps as early as Friday, with a federal appeals court based in Washington, a source familiar with the plan said.

While there have been strong signals that a majority of the Supreme Court -- perhaps further piqued by how the President and other officials rolled out the new effort -- could block the federal moratorium, the New York moratorium in some ways was far stricter than the one drafted by the CDC.

Thursday night, over the dissent of the court's three liberals, the justices blocked a provision of New York law that bars landlords from attempting to evict certain tenants amidst the pandemic. The majority pointed to the fact that the law allowed some tenants to "self certify" financial hardship. Landlords were not allowed to contest that certification in court. That, the majority said, violated the rights of the landlords.

"This scheme violates the Court's longstanding teaching that ordinarily 'no man can be a judge in his own case' consistent with the Due Process Clause," the court said in a brief unsigned emergency order.

The majority noted that another provision of law aimed at easing pressure on some tenants was not challenged and remains in place.

In contrast to the New York rule, the CDC's moratorium does not stop court cases from being heard simply because a tenant claims hardship. Under the federal moratorium, a tenant must provide a declaration under penalty of perjury indicating several factors including that the individual has used "best efforts" to obtain all available governmental assistance, that the individual earned no more than $99,000 in calendar year 2020 and that eviction would likely render the individual homeless -- or force the tenant to move into "close quarters in a shared living setting."

A rough road ahead for the CDC's moratorium

Even as she is letting the CDC moratorium continue, Friedrich pilloried the Biden administration for its handling of the issue.

Days after the CDC order lapsed, the Biden administration unveiled an extension that would target counties based on their Covid transmission levels.
Friedrich called the new version "virtually identical" to the previous moratorium and decided that the prior court orders allowing the moratorium to survive should apply.

In a footnote explaining why she would have blocked the moratorium had it not been for the existing higher court orders, Friedrich wrote that the Biden administration had "not met its burden of showing that the equities cut strongly in its favor." The administration had "made no attempt to show how many evictions its moratorium actually prevents," she wrote, nor had it "identified any approach for evaluating when the compounding costs of the federal moratorium will outweigh its residual benefits."
If the landlords appeal her decision, it will first stop at the US Court of Appeals for DC Circuit, which previously said that the CDC's moratorium was "likely to succeed on the merits."

Friedrich noted, however, that in addition to the signals from the Supreme Court, other appeals courts have viewed the CDC's moratorium more skeptically.
"These intervening decisions call into question the D.C. Circuit's conclusion that the CDC is likely to succeed on the merit," she wrote.