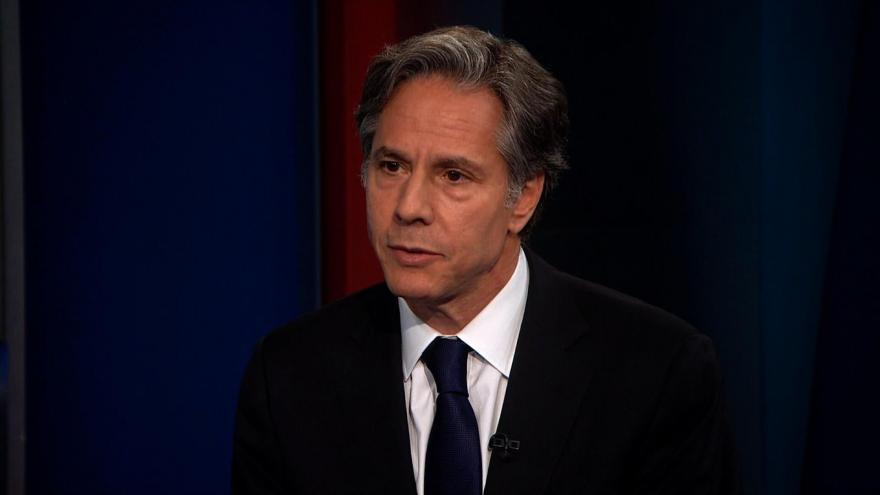 President-elect Joe Biden's pick to lead the State Department will tell Congress on January 20 of his plans to emphatically redirect the trajectory of US foreign policy after four years of the Trump administration.

(CNN) -- President-elect Joe Biden's pick to lead the State Department indicated to Congress Wednesday that he plans to emphatically redirect the trajectory of US foreign policy after four years of the Trump administration, rebuilding and reengaging alliances to confront transnational threats ranging from Russia and North Korea to climate change.

Antony Blinken is one of several national security nominees to appear before Senate confirmation hearings Tuesday the day before Biden's swearing in -- a signal of the new President's desire to ensure there are no national security gaps after the deadly insurrection at the Capitol by Donald Trump's supporters and amid ongoing concerns about extremist violence.

Blinken outlined three priorities in prepared remarks -- the first being to breathe life into a State Department hollowed out after four years of the Trump administration and undermined by Trump's attack on American democracy.

Blinken also emphasized the need to revitalize American diplomacy after international distrust and disgust engendered by Trump's policies. He also discussed Biden's desire to restore the administration's traditional foreign policy partnership with Congress, where lawmakers often complained of being shut out and ignored by Secretary of State Mike Pompeo.

And where Pompeo stressed "swagger," Blinken told lawmakers that "humility and confidence should be the flip sides of America's leadership coin."

"Humility because we have a great deal of work to do at home to enhance our standing abroad," Blinken said in prepared remarks. "But we'll also act with confidence that America at its best still has a greater ability than any country on earth to mobilize others for the greater good."

Blinken highlighted transnational challenges that will require international partnerships, from defeating the Covid-19 pandemic to dealing with China; standing up for human rights; reaffirming the value and strength of democratic governance; countering threats from Iran, Russia and North Korea; and taking on "the existential threat posed by climate change."

The 58-year-old also struck a personal note in his remarks at the top of the hearing, introducing himself to the public and the committee, where he once worked for six years and senators know him well. The father of two described his pride in his family's history of service, saying he sees it as "payment on the debt our family owes to the nation that gave us refuge and extraordinary opportunities across generations."

Blinken's grandfather fled pogroms in Russia, his stepmother fled communists in Hungary, and his late stepfather survived the Holocaust. Blinken's father and uncle went on to serve as US ambassadors. "It is the honor of a lifetime to appear before this Committee" as Biden's nominee, Blinken will tell the senators.

He will have an enormous challenge before him. Pompeo has left Blinken a depleted and demoralized department, former and current diplomats say. They point to Pompeo's failure to defend the former ambassador to Ukraine, Marie Yovanovich, from attacks by President Donald Trump. And despite Pompeo's oft-repeated pledge that he had no higher priority than the safety of his people, many diplomats are angry about his State Department's failure to do more to help diplomats suffering from mysterious sonic attacks.

Trump administration policies have resulted in a North Korea that, four years later, is better equipped to strike North American shores with nuclear weapons. Iran is closer to producing a nuclear weapon, if it decides to make the sprint toward one. China has further solidified its influence in Asia, crushing Hong Kong's democracy and inking a trade agreement after Trump in 2017 tore up Obama administration plans to create a Trans-Pacific Partnership of its own.