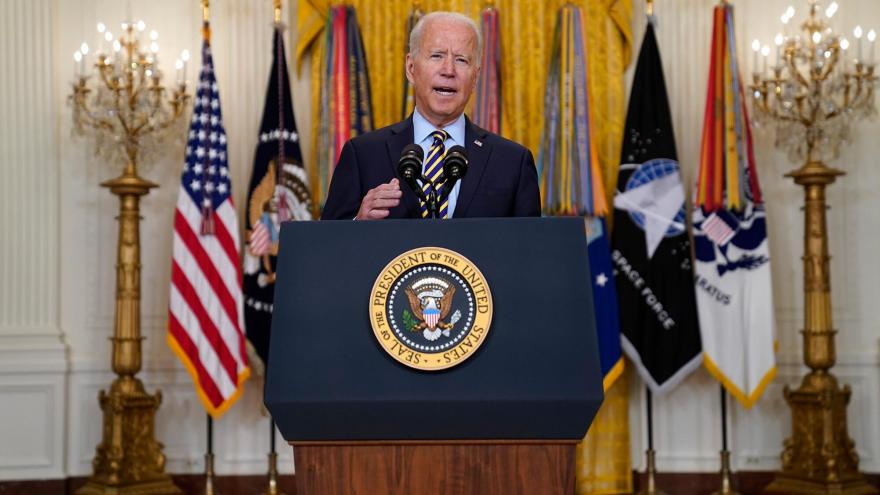 President Joe Biden speaks about the American troop withdrawal from Afghanistan, in the East Room of the White House on July 8 in Washington. Biden's review of former President Donald Trump's restrictive Cuba policy is still underway.

Several months after taking office, Biden has yet to fulfill his campaign pledge to reverse his predecessor's policies and "go back" to the full diplomatic relations put in place by former President Barack Obama.

The lack of action by the Biden administration on Cuba was highlighted this week after the communist-run island witnessed its largest protests in decades. An administration official confirmed there are no changes on the horizon as the policy is still under review.

Whether Biden will ultimately follow through remains to be seen. New Jersey Sen. Bob Menendez, a New Jersey Democrat who is a strong opponent of Obama's policies and the powerful chairman of the Foreign Relations Committee, hinted Monday that he thinks Biden may not.

"I think the President has had a time to review the actual policies under President Obama and all of the openings that President Obama made, which were one-sided, unilateral in terms of concessions, showed themselves to create absolutely no change inside of Cuba," Menendez told CNN's Jake Tapper. "So the result of that, I think, is the Biden administration looked and said, 'Wait a minute. That didn't seem to work.'"

On Monday, Menendez and Biden spoke during a brief phone call, according to an official.

Biden also told reporters he would talk more publicly about the ongoing crises in Cuba and Haiti later this week. A senior official says he has no formal speech planned but he will likely discuss it more as the US gathers intelligence.

How Biden navigates Cuba could carry political implications, given he lost Florida to Trump in the 2020 election after the former President repeatedly claimed Biden would turn the US into a "socialist country" if he won, a message that resonated with Cuban Americans.

While changing Cuba policy was not among his "top foreign policy priorities," according to top aides, the recent protests have sparked fresh conversations about it inside the West Wing.

Thousands of Cubans took to the streets this weekend to protest a lack of food and medicine as the country undergoes a grave economic crisis aggravated by the Covid-19 pandemic and US sanctions.

"I don't think we've seen anything like this protest in a long, long time -- quite frankly, ever," Biden told reporters at the White House on Monday.

The President said the US "stands firmly with the people of Cuba as they assert their universal rights," and said the Cuban people "are demanding their freedom from an authoritarian regime."

He called on the Cuban government to "refrain from violence or attempts to silence the voice of the people of Cuba."

Biden also told reporters at the White House on Monday that his team was closely monitoring the developments in Haiti in the wake of the assassination of Haitian President Jovenel Moïse. He was killed last week on his private residence in the capital of Port-au-Prince, and Haiti's first lady, Martine Moïse, was also shot in the attack and evacuated to a hospital in Miami for treatment.

Biden on Monday indicated that the US is "ready to provide assistance" to both Cuba and Haiti, but it is unclear what form that will take.