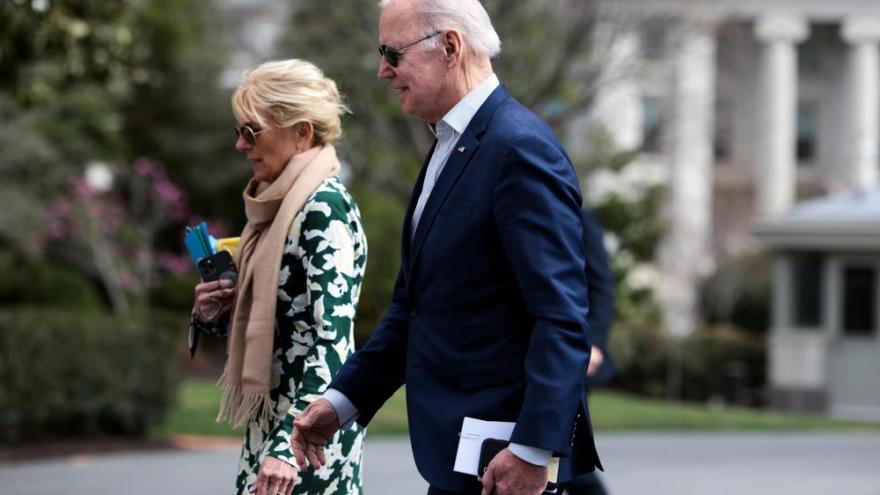 President Joe Biden and first lady Jill Biden will attend the White House Correspondents' Dinner on April 30. The Bidens return to the White House on March 20, in Washington, DC.

It will be the first time that the sitting President has attended the black-tie dinner, which usually draws a crowd of reporters, media executives, administration officials, lawmakers, and sometimes, celebrities, since 2016. Former President Donald Trump skipped the dinner during his presidency and it was canceled in 2020 and 2021 due to the Covid-19 pandemic.

Prior to that, Presidents in recent history have regaled the dinner with humor and self-deprecation during their speeches.

"The @WHCA is pleased to host President Biden and Dr. Jill Biden as we honor the First Amendment at our dinner on April 30," the White House Correspondents' Association said on Twitter.

Trump was a target of then-President Barack Obama's roasts at multiple White House Correspondents' Dinners starting in 2011, when he was a guest.

"We all know about your credentials and breadth of experience. For example -- no, seriously, just recently, in an episode of Celebrity Apprentice -- at the steakhouse, the men's cooking team cooking did not impress the judges from Omaha Steaks. And there was a lot of blame to go around," Obama said in 2011.

He continued, "But you, Mr. Trump, recognized that the real problem was a lack of leadership. And so ultimately, you didn't blame Lil Jon or Meatloaf. You fired Gary Busey. And these are the kind of decisions that would keep me up at night."

"Say what you will about Mr. Trump, he certainly would bring some change to the White House," Obama said, years before Trump would succeed him.

And amid the 2016 Republican primary, Obama continued his barbs at his final dinner in office.

"I am a little hurt he's not here tonight," Obama said. "We had so much fun the last time. And it is surprising -- you have a room full of reporters, celebrities, cameras. And he says no. Is this dinner too tacky for The Donald? What could he be possibly doing instead? Eating a Trump Steak? Tweeting out insults to Angela Merkel? What's he doing?"