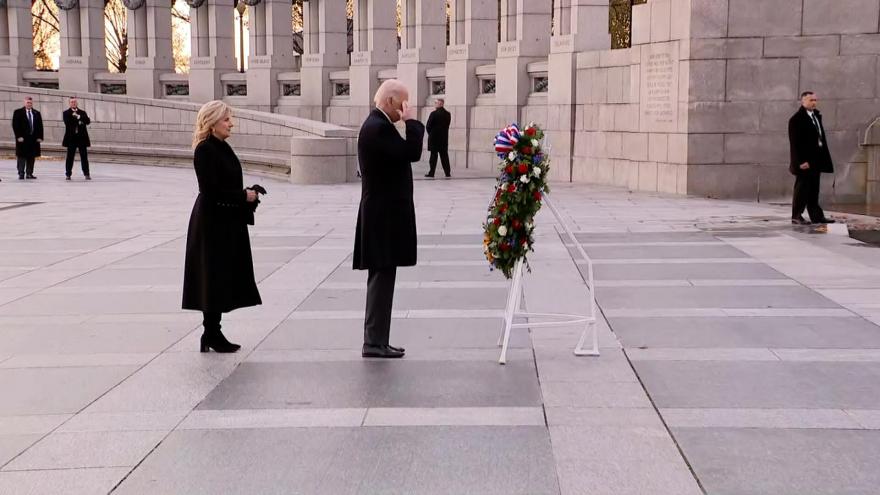 President Joe Biden and first lady Jill Biden visited to the World War II Memorial in Washington, DC, to pay their respects on the 80th anniversary of the attack on Pearl Harbor.

(CNN) -- President Joe Biden and first lady Jill Biden visited to the World War II Memorial in Washington, DC, early Tuesday morning to pay their respects on the 80th anniversary of the attack on Pearl Harbor.

The Bidens observed a moment of silence standing in front of a wreath at the center of the memorial. The President did not make remarks.

The White House said the wreath contained one wild sunflower in honor of Republican Sen. Bob Dole of Kansas, who died on Sunday. The wild sunflower is the state flower of Kansas. Dole was a veteran who was seriously wounded during World War II.

The Bidens then walked to the New Jersey pillar of the memorial and the first lady laid a bouquet of flowers at the base in honor of her father, Donald Jacobs, who served as a US Navy signalman in WWII. The Bidens both stood at the base of the pillar and bowed their heads.

The visit comes just hours before the President is set to hold a high stakes meeting with Russian President Vladimir Putin, in which he is expected to raise concerns regarding Russian military buildup on the border of Ukraine.

US officials are currently weighing a wide set of sanctions on Russia meant to deter Putin from launching an invasion into Ukraine, according to people familiar with the discussions. A senior administration official said Monday the US was prepared to take "substantive economic countermeasures" meant to inflict "significant and severe economic harm on the Russian economy" should Putin go ahead with a military escalation in Ukraine.