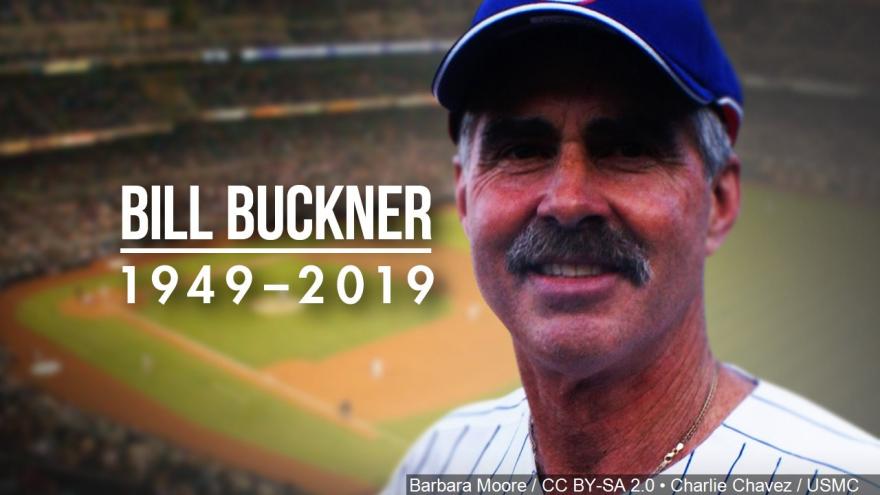 Bill Buckner was an All-Star and batting champion, a gritty gamer who was welcome on any team.

A reliable fielder, too.

But a little grounder forever changed his legacy.

Buckner, who made one of the biggest blunders in baseball history when he let Mookie Wilson's trickler roll through his legs in the 1986 World Series, died Monday. He was 69.

Buckner died after a long battle with Lewy body dementia, his family said in a statement. The disease causes Alzheimer's-like symptoms along with movement and other problems.

Buckner made his major league debut as a teenager, played until he was 40 and amassed 2,715 hits in between. Yet for all he accomplished, it was his October error at first base that fans always remembered.

Trying for their first crown since 1918, the Boston Red Sox led the New York Mets 5-3 going into the bottom of the 10th inning in Game 6 at Shea Stadium. The Mets tied it with two outs, then Wilson hit a roller up the first base line that got past a gimpy Buckner, a misplay that let Ray Knight rush home from second base with the winning run.

The Red Sox lost 8-5 in Game 7, and their World Series drought continued until they won the championship in 2004.

In the aftermath of Boston's near-miss, Buckner became a target of fans in New England and beyond, his mistake shown over and over on highlight reels.

"You can look at that Series and point fingers in a whole bunch of different directions," Buckner said a decade ago. "We did the best we could to win there and it just didn't happen and I didn't feel like I deserved" so much blame.

A curious thing happened over time, too: He became pals with Wilson.

"I was saddened to hear about Bill's death," Wilson said in a statement. "We had developed a friendship that lasted well over 30 years. I felt badly for some of the things he went through. Bill was a great, great baseball player whose legacy should not be defined by one play."

But sure enough, several years ago when he made a guest appearance on the TV show "Curb Your Enthusiasm," the main gag involved star Larry David tossing a ball autographed by Wilson toward Buckner, who lets it get past him and out the window.

A footnote: While Buckner was long criticized for the error, many in baseball contend that even if the ball had been handled cleanly, the speedy Wilson would have beaten it anyway.

At Fenway Park on Monday, video clips of Buckner's 22-year career were shown on the scoreboard before the Red Sox hosted Cleveland. His picture was posted and there was a moment of silence, followed by applause from the crowd.

"I think it was a travesty the way he was last remembered," said 67-year-old Red Sox fan Blaine Macinnis from Wilmington, Massachusetts, in a box seat on the first base side. "It was a great injustice of how he ended it with that last play. It's a shame. That's how life is."

"Like when your own father dies, you don't want to remember all the bad things," he said.

"I think it's a shame how he was treated," he said.

Buckner was released by the Red Sox in the summer of 1987 and went on to play for the Angels and Royals. He returned to Boston for his final season in 1990, playing 22 games.

In 2008, Buckner finally accepted an invitation to throw out the first ball for the home opener at Fenway Park as the Red Sox celebrated winning another title.

Buckner drew loud cheers as he walked from the Green Monster in left field to the mound, and made his ceremonial toss to former teammate Dwight Evans.

Buckner said the moment was "probably about as emotional as it could get."

"I really had to forgive," he said later that day, "not the fans of Boston per se, but I would have to say, in my heart, I had to forgive the media for what they put me and my family through. So I've done that. I'm over that. And I'm just happy that I just try to think of the positive. The happy things."

"I thought it was kind of a healing moment, it seemed, for a lot of people and for him, I hope," Francona said before Monday's game. "You have to be up here to understand how people take things that happen. I thought that was a really cool moment."

That moment was played on the videoboard during the fifth inning, drawing cheers.

In a statement, Red Sox chairman Tom Werner praised "Billy Buck," saying he "personified toughness and grit, and his determination to play through pain defines him far more than any single play ever could."

Tweeted former Boston teammate Wade Boggs: "OMG such a sad day can't put it in perspective with the only reason why we made it to the World Series in 86."

Buckner lived in Boise, Idaho, after he finished playing. He was the hitting coach for the Chicago Cubs' minor league affiliate in Boise in 2012-13 and owned three car dealerships and several commercial properties in Idaho.

Hall of Fame manager Tom Lasorda of the Dodgers called Buckner "one of the best competitors I have ever seen."

Buckner made his big league debut with the Dodgers at 19 in 1969 and became a batting champ with the Cubs. He had a career .289 average and totaled over 100 RBIs in three seasons, twice with Boston. Buckner finished with 174 home runs and 1,208 RBIs and he was a fast outfielder, once stealing 31 bases.

An old-school player with a mustache, Buckner was eager to swing — he had 9,397 career at-bats and never struck out 40 times in a season and never walked more than 40 times in a year.

He is survived by his wife, Jodi, two daughters and one son.