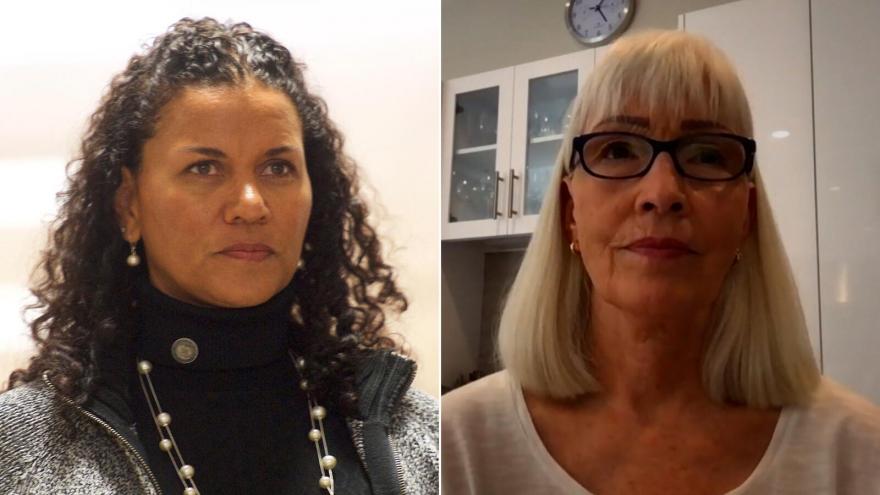 (CNN) -- Bill Cosby's sexual assault conviction, the first high-profile celebrity criminal trial of the #MeToo era, was reversed, but his accusers hope the movement will continue to inspire victims to come forward.

"It is a discouraging message to sexual assault survivors," said Patricia Leary Steuer, who accused Cosby of assault. "I hope it won't, because in the end all you can do is come forward and tell the truth."

The man once known as "America's Dad" was released from prison after three years Wednesday when Pennsylvania's highest court said his due process rights were violated over the course of his prosecution.

A former Montgomery County district attorney decided to not prosecute Cosby in 2005 in return for his deposition in a civil case, and that deposition was ultimately used against him in trial, the panel of Pennsylvania State Supreme Court judges said in their opinion.

While some of Cosby's accuser's, like Steuer, said they agree with the legal standing of the decision, others decried it -- but all of those who accused him of sexual assault stood by their stories.

"A technicality doesn't make you innocent. It means something went wrong in the system," said Lise-Lotte Lublin, who accused Cosby of sexually assaulting her in 1989.

Cosby has maintained that his sexual interactions were consensual.

"Well, I'm not guilty," Cosby told CNN Wednesday. "So, when I see what they are trying to put up, and I'm saying, this is not right."

Cosby found out around noon Wednesday that his conviction had been overturned. A guard knocked on his cell door while he was sleeping, told him he was free, and left the door open, said his spokesperson, Andrew Wyatt.

The entertainer was later greeted at home by lawyers and supporters, and on Thursday he plans to see his wife, Camille, for the first time in three years, Wyatt said. Cosby did not want family visiting him in prison but he did speak with them, Wyatt said.

TIME'S UP Foundation CEO Tina Tchen said Wednesday said that Cosby's release erased the semblance of justice for the women who accused him of assault but applauded the courage of accusers and offered support to those who speak out.

"To the survivors in this case, each of you came forward with great courage against a powerful man at great personal risk," Tchen said. "We were standing with you then and we're here standing next to you now."

Steuer encouraged women to keep speaking out: "Come out. Speak. Stand in truth about this. Be counted. Your voice matters."

Cosby was sentenced in 2018 to 3 to 10 years in a state prison for drugging and sexually assaulting Andrea Constand at his home in 2004.

The Cosby case was seen by many as a test of whether the cultural shift the #MeToo movement brought about would translate in court.

The Montgomery County district attorney who prosecuted Cosby, Kevin Steele, said the actor was free on a procedural issue that is "irrelevant to the facts of the crime."

"I want to commend Cosby's victim Andrea Constand for her bravery in coming forward and remaining steadfast throughout this long ordeal, as well as all of the other women who have shared similar experiences," Steele said.

"My hope is that this decision will not dampen the reporting of sexual assaults by victims. Prosecutors in my office will continue to follow the evidence wherever and to whomever it leads. We still believe that no one is above the law -- including those who are rich, famous and powerful."

Although dozens of women accused Cosby of sexual misconduct, only Constand's allegations resulted in criminal charges.

Constand initially told police about the assault in 2005, a year after it occurred. After former Montgomery County District Attorney Bruce Castor decided not to file charges in the case, Constand and Cosby settled a civil lawsuit for $3.38 million in 2006.

In late 2015, when a groundswell of women spoke out with accusations against Cosby, Steele, the new prosecutor in Montgomery County, filed charges.

In April 2018, a jury found Cosby guilty of three counts of aggravated indecent assault. The verdict came a year after Cosby's previous trial ended in a mistrial, as a different panel of jurors said they were deadlocked and could not unanimously agree on a verdict.

"We have a movement that wants to make a platform inside the courtroom for women who did not press their claims," Bonjean said. "I believe we have a trend in our courtrooms where the courtrooms are being infiltrated by the court of public opinion and that leads to miscarriages of justice."

"And we are going back to the judge next month, well actually in August, to have a status conference," Allred told John Berman on New Day. "And now the court will be ready to set a date for us to finish our discovery and perhaps to set a date for trial."

Wyatt said further civil litigation is an "act of desperation."

The 'remedy is both severe and rare' but warranted, judges say

Judges on the Pennsylvania Supreme Court last December heard arguments that Cosby sat for a civil deposition regarding Constand only because Castor, the former district attorney, had promised he would not prosecute him criminally. In that deposition, Cosby admitted that he procured Quaaludes for women he wanted to have sex with.

In their decision Wednesday, the judges wrote that Castor had felt "he would not be able to prove beyond a reasonable doubt that Cosby drugged and raped Constand."

"Seeking 'some measure of justice' for Constand, D.A. Castor decided that the Commonwealth would decline to prosecute Cosby for the incident involving Constand, thereby allowing Cosby to be forced to testify in a subsequent civil action, under penalty of perjury, without the benefit of his Fifth Amendment privilege against self-incrimination," the judges wrote.

That civil deposition Cosby gave was revealed in 2014, and one of Castor's successors later used statements he made in the deposition as part of the criminal trial.

The judges wrote that they weighed different remedies -- including having another trial for Cosby -- but felt there was only one proper remedy.

"He must be discharged, and any future prosecution on these particular charges must be barred," the judges wrote. "We do not dispute that this remedy is both severe and rare. But it is warranted here, indeed compelled."

But one of Cosby's accusers said the overturned conviction does not mean he escaped the consequences of the actions she said he took.

"He has become this infamous person versus a famous person, and he's going to have to deal with that," Lublin said.

Cosby "still has much to offer" and wants to get back on stage, Wyatt said.

The comedian signed a deal for a five-part documentary series which he started shooting four years ago, Wyatt said. He will be doing interviews with that team, the spokesperson said.