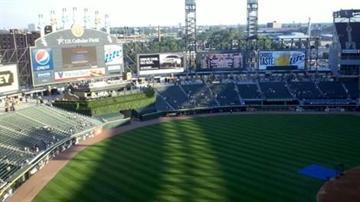 I once let two of my sorority sisters each punch me in the thigh.  One who was "strong" and another who was "less strong".  It was all to prove a point...that I do not bruise THAT easily.  Well, both girls punched me pretty hard (side note...do not ever allow people to punch you...especially when they are kneeling aiming straight at your leg.  It will hurt) and I got two bruises, one noticeably more pronounced than the other.

So I guess I do bruise easier than most.  But, I always say, I just fall and run into things harder than most.  That was really the case last night.  I went to Chicago.  Seeing a White Sox game was on my Chicago bucket list, and with great weather, it seemed like a great night for it!  (Hence the photo).

The time was 2:03AM Eastern.  I was getting off the train in Michigan City, reached out to clutch the handrail, and then things went downhill.  By things, I mean me.  The handrail that usually clamps into the wall came undone.  I guess I was just holding on too tight?  Anyhow, I now have a very large purple souvenir from the adventure.

It has been an interesting couple of days.

Friday I went to visit a few of my college friends who were camping at Warren Dunes.  I have always had "sweet blood" as they say...meaning the mosquitoes LOVE me.  So, I put on bug spray, but obviously missed the back of my left arm, cause I went home with about 8 bites all in a small area.

Toothpaste is the best thing I have ever encountered for bug bites.  It takes away the itch immediately!  Just do not use the whitening kind.  Take my word for it.  So, Saturday as the storms were rolling in, I was sitting alone in the newsroom with an arm covered in toothpaste.  Wouldn't that have been a curious sight for someone walking in to see!  At least I smelled minty fresh!