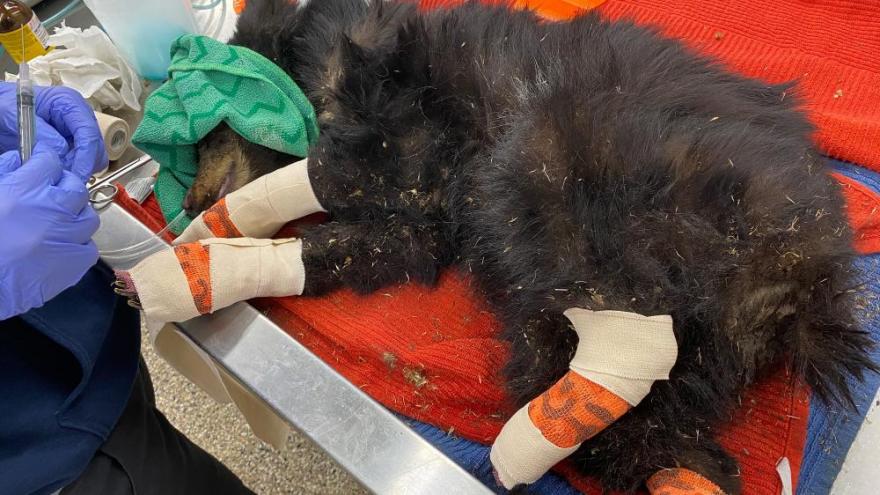 The bear cub weighed only 16.3 pounds when it was captured.

(CNN) -- An orphaned black bear cub that was suffering from injuries received during Colorado's biggest wildfire is running free in the Rockies after wildlife officials spent nearly five months nursing him back to health.

The yearling bear was released into the wild on May 5 in the mountains in Larimer County near Fort Collins, according to a news release from Colorado Parks and Wildlife (CPW).

Video of the release showed the bear scampering into the trees after a little coaxing from a wildlife officer, who banged and rocked the metal container he was transported in.

The bear was covered in cockleburs and was severely dehydrated, weak and starving with its ears that were infected from frostbite, CPW said.

It had suffered burns on its feet during the Cameron Peak Fire, which engulfed 208,913 acres in the county between August 15 and December 2, 2020.

"This is an incredibly fortunate bear," CPW Area Wildlife Manager Jason Duetsch said in the statement. "Most wild animals don't survive the myriad of injuries they are exposed to, let alone be found, captured and treated successfully. He definitely would not have made it through much longer. It is the smallest bear cub I have ever seen at that time of the year, which helped us make the decision to try rehabilitation."

CPW said it doesn't know how long the bear had been orphaned, or when it was hurt, but its burns had been healing for at least a month.

"Since the foot injuries on this cub appeared to be healing well, and his other wounds were very treatable, we felt that with supportive care and nourishment his prognosis for recovery was very good," said Dr. Pauline Nol, one of the veterinarians that treated the cub.

The cub lost portions of both ears due to the frostbite from exposure, CPW said. Wildlife officials suspect the orphaned bear didn't have the wherewithal to find adequate shelter and was exposed to the elements.

They kept the bear awake over the winter instead of letting it hibernate, so it could eat and gain back its weight by springtime.

The bear, now 1 years old, had bulked up to 93 pounds by the time it was freed, according to the release.

"This bear went through an awful lot in its first year of life," said Kristin Cannon, deputy regional manager for CPW's Northeast region in the release. "Let's hope humans can now help keep it wild by not rewarding it with our food sources and lowering its chances of survival."