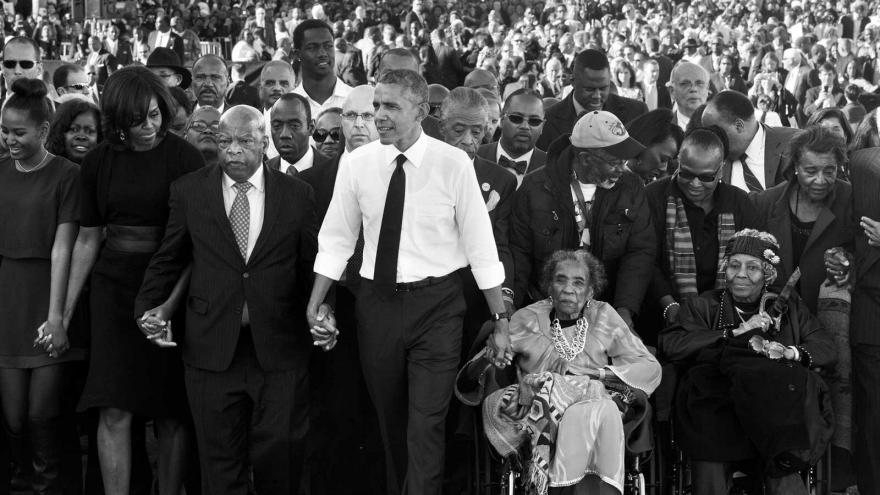 (CNN) -- She lay sprawled unconscious in the road, beaten and gassed by Alabama state troopers. A White officer with a billy club stood over her.

The woman was Amelia Boynton Robinson (1911-2015), and a famous photo of that shocking moment helped galvanize the civil rights movement. It was taken during the “Bloody Sunday” march at the Edmund Pettus Bridge in Selma, Alabama, on March 7, 1965.

That attack by White officers against peaceful Black demonstrators horrified the nation and led to the passage of the Voting Rights Act. It also revealed the toughness of Robinson, dubbed “the matriarch of the voting rights movement.”

“I wasn’t looking for notoriety,” Robinson later said. “But if that’s what it took, I didn’t care how many licks I got. It just made me even more determined to fight for our cause.”

Robinson had been fighting for Black voting rights long before Selma. As far back as the 1930s, she was registering Black voters in Alabama – a brave undertaking that could have cost Robinson her life in the Jim Crow South. In 1964, she became the first African American woman to run for Congress in Alabama.

President Obama honored her half a century later when he clutched her hand – she was frail by then, and in a wheelchair – as they crossed the Selma bridge in March 2015 to commemorate the 50th anniversary of Bloody Sunday. Robinson died five months later at age 104.

“She was as strong, as hopeful, and as indomitable of spirit — as quintessentially American — as I’m sure she was that day 50 years ago,” Obama said at her death. “To honor the legacy of an American hero like Amelia Boynton requires only that we follow her example — that all of us fight to protect everyone’s right to vote.”