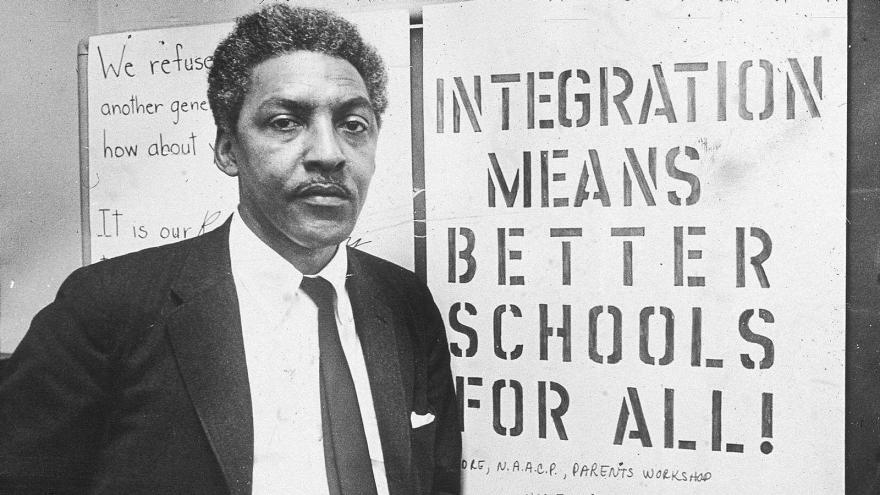 Bayard Rustin was a key ally of Rev. Martin Luther King Jr. He also organized the March on Washington.

(CNN) -- Bayard Rustin overcame prejudice on multiple levels to become a key ally of Rev. Martin Luther King Jr. and one of the most important civil rights leaders of the 20th century.

An openly gay Black man during the Jim Crow era, Rustin was arrested for having sex with men at a time when homosexuality was widely considered a form of mental illness. He served more than two years in federal prison for refusing to fight in World War II because of his pacifist Quaker beliefs.

But it was Rustin’s connection with King that became perhaps the high-water mark of his life.

After King became nationally known for leading the Montgomery Bus Boycott, Rustin — inspired by the teachings of Gandhi — traveled to King’s home in 1956 to convince him to adopt nonviolence as a protest tactic and a way of life. Rustin’s words were a revelation to King, who had armed bodyguards in his home.

King was pressured to drop Rustin from his inner circle of advisors because of his sexual orientation, but he refused to abandon him. King said no one could replace Rustin. Although Rustin sometimes had to keep a low public profile during the civil rights movement, he became more outspoken about his sexuality later in life and and has been hailed a hero by LGBQT activists.

Rustin’s crowning achievement was organizing the March on Washington, which brought more than 200,000 peaceful protesters of different races and religions to the nation’s capital in August 1963. The event, culminating in King’s “I Have a Dream” speech, was a rousing success. Organizing the gathering was a staggering logistical feat, but Rustin pulled it off in less than two months.