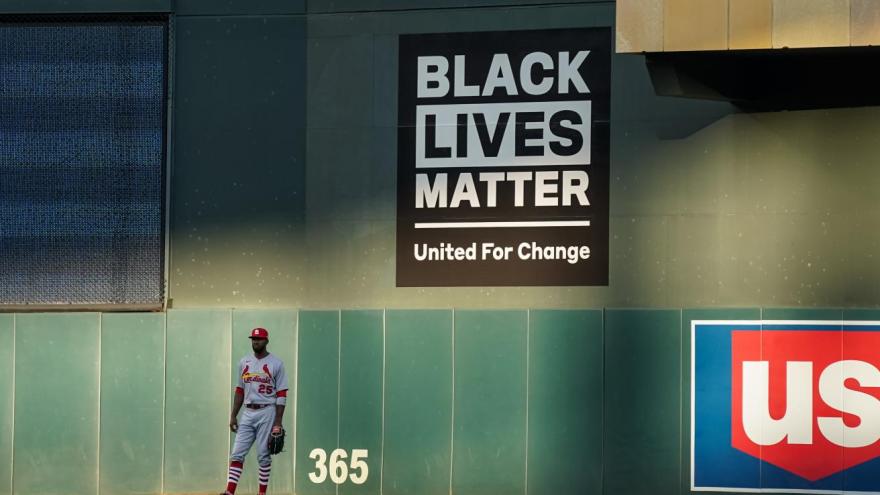 Dexter Fowler #25 of the St. Louis Cardinals looks on in front of a a wall graphic for Black Lives Matter against the Minnesota Twins on July 28, 2020 at the Target Field in Minneapolis, Minnesota. Dozens of Black baseball players will donate their salaries from Thursday and Friday to support racial justice initiatives, in honor of Jackie Robinson Day and in protest of Jacob Blake's shooting by police.

(CNN) -- Dozens of Black baseball players will donate their salaries from Thursday and Friday to support racial justice initiatives, in honor of Jackie Robinson Day and in protest of Jacob Blake's shooting by police.

Participating Major League Baseball players will donate their salaries to the Players Alliance, a group of more than 100 Black former and current professional baseball players, including the New York Yankees' Giancarlo Stanton and Mookie Betts of the Los Angeles Dodgers.

The Players Alliance encourages Black youth to play baseball and facilitates discussions about racial inequality in the sport.

"The color of our skin is the uniform we wear every day," the Players Alliance wrote in a statement. "We cannot change that. What we can change is the pain and injustice the Black community has suffered for far too long. We are determined to use our platform to speak out, and encourage our teammates and fans to help make our voices even louder."

Members of the Players Alliance will donate their salaries to the alliance, which funds mentorship and employment programs to develop Black talent.

Several MLB teams postponed their games on Wednesday and Thursday after the NBA's Milwaukee Bucks decided not to play their Wednesday playoff game against the Orlando Magic. The stand quickly spread from the NBA to a number of leagues, including the WNBA, Major League Soccer and the National Hockey League.

The cancellations came in protest of the police shooting of Jacob Blake in Kenosha, Wisconsin. An officer shot Blake, a 29-year-old Black man, seven times in the back at a close range while three of Blake's children watched from his car. Blake's father told CNN's "New Day" on Friday that his son is "fighting for his life" in a local hospital.

Jackie Robinson Day has been an MLB tradition since 2008, according to the league, when players all wear No. 42 jerseys in his honor and teams donate to social justice causes. The day is typically observed on April 15, the anniversary of Robinson's MLB debut, when he became the first Black player in the league.

Because the league had postponed the season due to the Covid-19 pandemic, Jackie Robinson Day was rescheduled for August 28, the anniversary of 1963's March on Washington.

CNN has reached out to the Players Alliance for additional comment.