Black rag dolls pulled from shelves after they were called racist 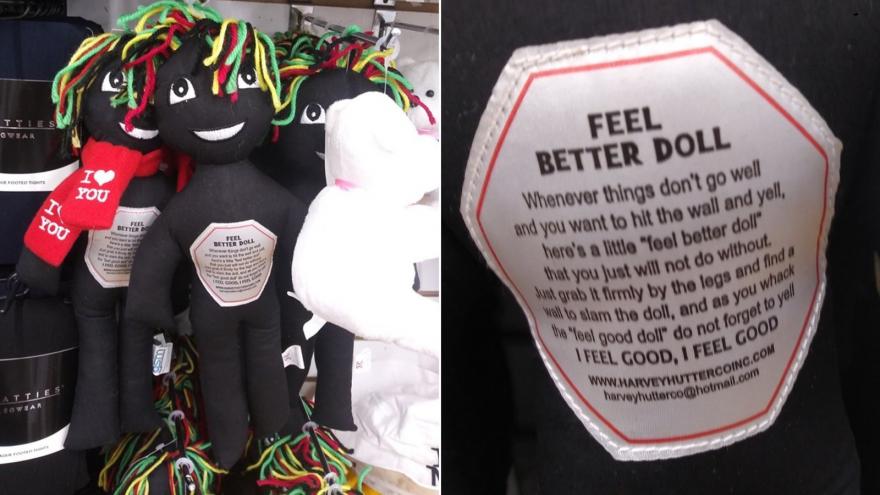 (CNN) -- Black rag dolls that instruct someone to abuse them were removed from the shelves of multiple One Dollar Zone stores after they drew criticism for being racist.

The "Feel Better Doll" comes with a label that tells people to "slam the doll" against a wall "whenever things don't go well."

New Jersey legislator Angela McKnight said she visited a One Dollar Zone store in Bayonne and found the toy "offensive and disturbing on so many levels."

"It is clearly made in an inappropriate representation of a black person and instructs people to 'slam' and 'whack' her," McKnight said in a Monday statement.

"Racism has no place in the world and I will not tolerate it, especially not in this district. When I saw the doll in person, I cringed and was truly disheartened by the thought of a black child being beaten by another child or an adult for pure pleasure. To have a product depict or teach children that it is OK to hit another child, regardless of race, in order to feel good is sick."

One Dollar Zone President Ricky Shah said the company immediately pulled the dolls from store shelves after customers voiced concerns about them.

"One Dollar Zone deeply apologizes for this incident," Shah said.

One Dollar Zone said the controversial dolls were part of an assorted 35,000 unit purchase. The company said it tries to vet all the items but aren't able to catch everything.

The dolls came in two other colors, green and yellow, the company added.

The manufacturer of the dolls is Harvey Hutter Co. The company's phone numbers have been disconnected and its website no longer exists.

One Dollar Zone operates about 30 stores in the Northeast, including in New Jersey, Pennsylvania, Rhode Island, Connecticut and Massachusetts.