Explosions at Kabul airport with US personnel reported among casualties 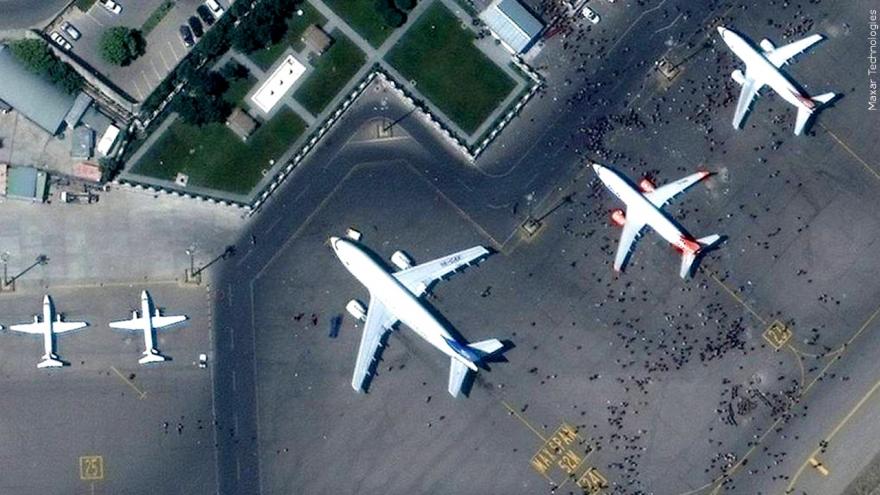 (CNN) -- At least two explosions took place outside the Kabul airport on Thursday as the United States and other countries try to evacuate their citizens and Afghans at risk from the Taliban.

Three US officials and a source familiar with the situation said that according to initial reports, there were some US personnel among the casualties.

"We can confirm that the explosion at the Abbey Gate was the result of a complex attack that resulted in a number of US & civilian casualties. We can also confirm at least one other explosion at or near the Baron Hotel, a short distance from Abbey Gate. We will continue to update," Pentagon spokesman John Kirby tweeted.

The blast happened at one of the entry gates of the Hamid Karzai International Airport and appears to be a suicide attack, according to three US officials.

Crowds of Afghans have been gathering at the gates trying to gain access to the airport, which has become the only way out of the country since the Taliban took over Kabul.

The US Embassy in Kabul said that US citizens who were at the Abbey Gate, East Gate, or North Gate of the airport "should leave immediately" in the wake of the blast.

"There has been a large explosion at the airport, and there are reports of gunfire," the security alert said. "US citizens should avoid traveling to the airport and avoid airport gates at this time," it added.

The French Ambassador to Afghanistan, David Martinon, warned that a second explosion at the Kabul airport remained a possibility. "To all our Afghan friends if you are close to the doors of the airport get away as quickly as possible and shelter yourselves. A second explosion is possible," he tweeted.

Tens of thousands of people have been evacuated by the US military and NATO allies from the airport in the past two weeks. These evacuations are set to start winding down in the next few days, ahead of the August 31 deadline for the final exit from a 20-year war in Afghanistan.

One US official said there are injuries among Afghans, but there is no information yet on any US casualties.

US officials said earlier on Thursday that concerns about security around the airport have increased based on "a very specific threat stream."

The top US diplomat in Kabul, Amb. Ross Wilson, said Thursday that he could not get into the specifics of the security threat outside the gates of the Kabul airport cited in an embassy alert, but noted that "it was clearly regarded as credible, as imminent, as compelling."

US President Joe Biden has been briefed on the explosion outside Kabul airport, a White House official said. The President was in the situation room along with Defense Secretary Lloyd Austin and Secretary of State Antony Blinken.

A spokesperson for the UK government said the government was "working urgently to establish what has happened and its impact on the ongoing evacuation effort."

"Our primary concern remains the safety of our personnel, British citizens and the citizens of Afghanistan. We are in close contact with our US and other NATO allies at an operational level on the immediate response to this incident."

The emergency services of the Bundeswehr, Germany's military operations command, were unaffected by the explosion, the German Defense Ministry tweeted Thursday.