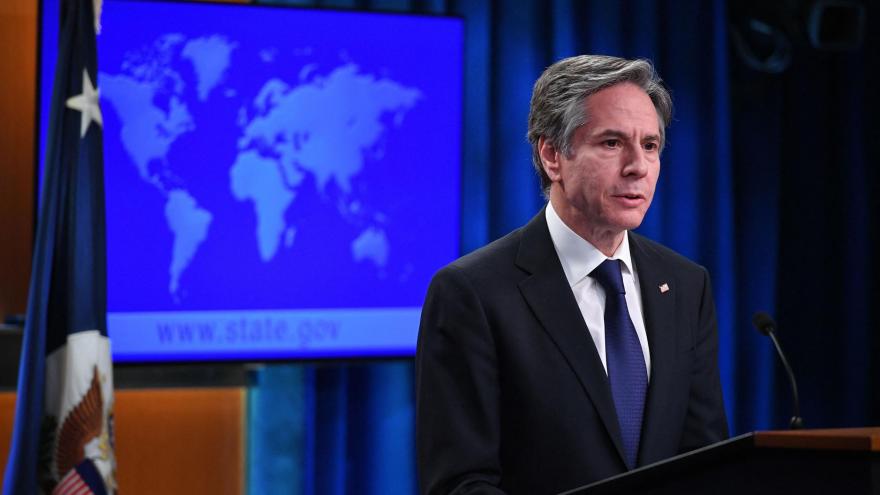 Secretary of State Antony Blinken criticized China Sunday for not disclosing information on Covid-19 and its aggression in Taiwan and said that the US has \"real concerns\" about Russia\'s actions on the Ukraine border. - Mandel Ngan/Pool/AFP/Getty Images

(CNN) -- Secretary of State Antony Blinken criticized China Sunday for not disclosing information on Covid-19 and its aggression in Taiwan and said that the US has "real concerns" about Russia's actions on the Ukraine border.

"I think China knows that in the early stages of Covid, it didn't do what it needed to do, which was to in real time give access to international experts, in real time to share information, in real time to provide real transparency," Blinken said on NBC's "Meet The Press."

The top diplomat added that a result of that failure was that the virus got "out of hand, faster and with, I think, much more egregious results than it might otherwise." He did not answer whether he believes China knows the origins of Covid-19 and is withholding that information.

Blinken also called for a stronger global health security system to prevent a similar situation or mitigate it if it were to happen again, which Blinken said would include, in part, transparency, access to experts and strengthening and reforming the World Health Organization -- noting that China would have to play a part in that. But he did not call for punitive measures against China over its handling of the coronavirus outbreak.

The comments from Blinken come amid tensions between the US and China and recent reports of the country's aggressive tactics against Taiwan. Last week, China's armed forces conducted military exercises to the west and east of Taiwan, a move analysts said was a warning to the island and the United States.

China on Thursday stressed the importance of Taiwan to China and warned the US not to "play with fire" and "cross the line" when it comes to the relationship with the self-ruled island.

Blinken said Sunday the US stands behind its commitment to Taiwan to make sure it can defend itself as Beijing increases its aggressive tactics.

"All I can tell you is, it would be a serious mistake for anyone to try to change the existing status quo by force," he said when asked if the US is prepared to defend Taiwan militarily. Asked if that meant the US will respond with military force, Blinken said he would not get into hypotheticals and reiterated the country's commitment to Taiwan.

Tensions over Taiwan have been heating up in recent months as Taipei has garnered support from the US in the form of new military hardware, an agreement between the US and Taiwanese coast guards, and strong statements of support from the Biden administration.

Blinken also said that the US has "real concerns" over Russia's actions near the border of Ukraine, adding the US is in "very close contact and close coordination" with allies in Europe.

"The question is, 'is Russia going to continue to act aggressively and recklessly?' If it does, the President's been clear, there'll be costs, there'll be consequences," he said.

He added that President Joe Biden has "been very clear" about consequences for Russia but at the same time is "equally clear eyed" that there are areas where US and Russia have shared interests, such as the START Treaty.

CNN reported Thursday that the US has been actively considering how to counter Russian aggression, including sending warships to the Black Sea.

Blinken also said the US has a "significant responsibility," to get the world vaccinated, saying that the US will be a leader in that effort when it's all said and done.

"Unless and until the vast majority of people in the world are vaccinated, it's still going to be a problem for us, because as long as the virus is replicating somewhere, it could be mutating and that it could be coming back to us but similarly, the world has a very strong interest in making sure that we're vaccinated," he said. "Because the same thing applies, if the vaccine, if the virus is replicating here and mutating here that's going to be a problem for the rest of world."