Blinken: Russia has plans in place to increase force on Ukraine borders 'even more' 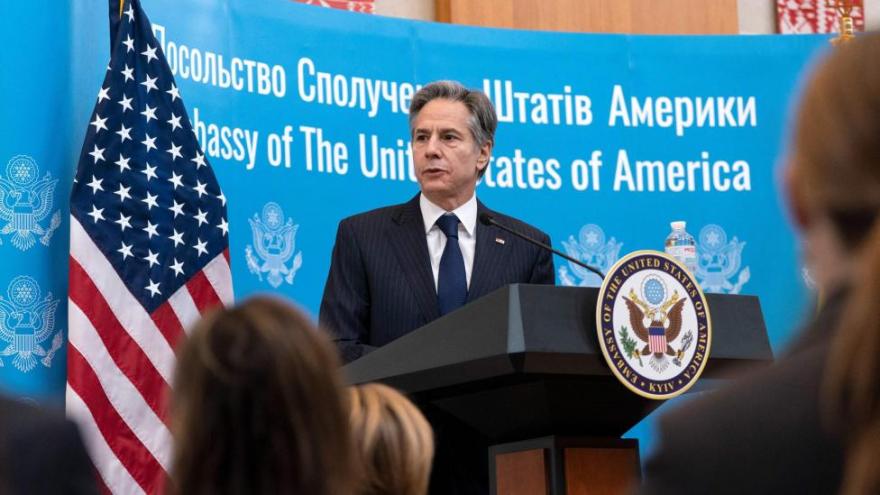 Russia has plans to further increase its military forces on Ukrainian borders, Secretary of State Antony Blinken said in remarks to personnel at the US Embassy in Kyiv, pictured on January 19.

(CNN) -- Russia has plans to further increase its military forces on Ukrainian borders, Secretary of State Antony Blinken said Wednesday in remarks to personnel at the US Embassy in Kyiv.

"We know that there are plans in place to increase that force even more on very short notice," Blinken said of the massive troop build-up near Ukrainian borders. "And that gives President Putin the capacity also on very short notice to take further aggressive action against Ukraine and that, of course, has gotten not only our attention, but it's gotten the attention of virtually all of our allies and partners and not just in Europe, even beyond."

"This is a critical time for Ukraine," Blinken explained to a crowd of roughly 60 people, speaking alongside Charge d'Affaires Kristina Kvien.

Blinken arrived in Ukraine's capital on Wednesday for the first of three stops this week amid concerns that Russia is preparing to invade Ukraine.

He met with Ukrainian President Volodymyr Zelensky on Wednesday, reaffirming Washington's support for the country and telling Zelensky that it is "up to Ukrainians and no one else."

Blinken warned Russia there were two paths out of this situation.

"There is the path of diplomacy and dialogue to try to resolve whatever differences there are peacefully through diplomacy," he said in his remarks to staff at the embassy. "Clearly the preferable path, clearly the most responsible path and the one that we would prefer, but there is also the path if Russia chooses to renew aggression, of conflict, confrontation and consequences for Russia."

Blinken said President Joe Biden had asked his team to "take stock" of the situation after intense negotiations with allies but also conversations with Russia, and to "reaffirm" the US' commitment to Ukraine.

"I strongly, strongly hope that we can keep this on a diplomatic and peaceful path, but ultimately, that's going to be President Putin's decision," he concluded.

The top US diplomat will later travel to Berlin to meet with his German counterpart to discuss efforts to deter further Russian aggression against Ukraine, before heading to Geneva on Friday to meet with Russian Foreign Minister Sergey Lavrov.

Blinken and Lavrov plan to discuss Russia's military build-up and its demands for security guarantees, in what will be the first high-level meeting between Russia and the United States since diplomatic talks last week ended without any major breakthroughs.

Russia has now deployed more than 127,000 troops near Ukraine, transferred more Iskander operational-tactical missiles to the border, and increased its intelligence activity against the country, according to the Ukrainian Defense Ministry's latest intelligence assessment that was shared exclusively Tuesday with CNN.

The Kremlin has continued to deny it is planning an attack, while demanding that the US and its Western partners rule out further NATO eastward expansion, guarantee that Ukraine would never join the block, and prevent NATO from establishing military bases in post-Soviet countries.