Blinken: Russian invasion of Ukraine 'could begin at any time' 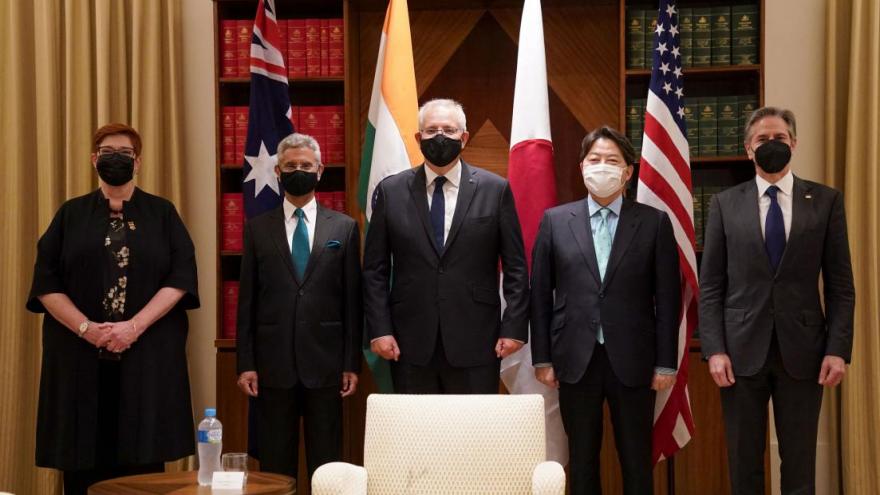 US Secretary of State Antony Blinken said Friday that a Russian invasion of Ukraine "could begin at any time" and the United States continues "to see very troubling signs of Russian escalation, including new forces arriving at the Ukrainian border."

(CNN) -- US Secretary of State Antony Blinken said Friday that a Russian invasion of Ukraine "could begin at any time," including during the Beijing Winter Olympics, and the United States continues "to see very troubling signs of Russian escalation, including new forces arriving at the Ukrainian border."

The top US diplomat made the comments alongside his counterparts from the Quad -- Australia, India and Japan -- following a day of meetings in Melbourne and after the State Department and President Joe Biden warned US citizens to depart Ukraine immediately.

"As we've said before, we're in a window when an invasion could begin at any time -- and to be clear that includes during the Olympics," Blinken said.

Prior to the start of the Olympics earlier this month, Deputy Secretary of State Wendy Sherman suggested that the Winter Games, which are hosted by China, could impact Russian President Vladimir Putin's thinking about the timing of a potential invasion. Putin traveled to Beijing for the beginning of the Olympics and met with Chinese President Xi Jinping. The two released a lengthy pact pledging no limits to their cooperation.

Blinken told reporters at the joint news conference Friday that the US was "continuing to draw down our embassy" in the Ukrainian capital of Kyiv and "will continue that process."

"And we've also been very clear that any American citizens who remain in Ukraine should leave now," he added.

In Washington, the White House convened a meeting with several Cabinet members and senior national security officials in the Situation Room on Thursday night to discuss Russia's ongoing military buildup near Ukraine, two officials familiar with the matter told CNN. There have been several Situation Room meetings in recent weeks and months to discuss the brewing crisis, one of the sources said, but the meetings have grown more urgent in recent days as Russia has continued to move forces, weapons and logistical equipment into the area and increased troop readiness.

Biden will hold a call with other world leaders at 11:00 a.m. ET Friday on the situation in Ukraine, a White House official told CNN. The leaders of Canada, the United Kingdom, France, Germany, Italy, Poland, Romania, NATO, the European Commission and the European Council will be on the call, according to the official.

Last month, the State Department authorized the departure of nonemergency personnel from the US Embassy in Kyiv and ordered family members to depart the country, and on Thursday it issued a new travel advisory for American citizens in Ukraine to "depart now via commercial or private means."

Although Friday's Quad discussions focused primarily on matters related to the Indo-Pacific region, Russia's aggression toward Ukraine was discussed among the four foreign ministers.

The top US diplomat repeatedly noted that the crisis goes deeper than the physical threat posed by Russia to Ukraine and could undercut the international rules-based order that the Quad countries have vowed to uphold.

"If we allow those principles to be challenged with impunity, even if it's half a world away in Europe, that will have an impact here as well," he continued. "Others are watching. Others are looking to all of us to see how we respond. So that's why it's so important that we have this solidarity, that we do everything is possible through diplomacy, to try to avert a conflict and prevent aggression, but equally be resolute if Russia renews its aggression."

Blinken said that although the Biden administration is "relentlessly" focused on trying to resolve the Russia-Ukraine crisis, his presence in Australia for the Quad meetings "underscores our commitment to staying focused on the Indo-Pacific."

Blinken said last month that the ball is in Russia's court, and the officials said that remains the case when it comes to future diplomatic engagements. The United States gave Moscow a written response aimed at deterring a Russian invasion of Ukraine more than two weeks ago, and is waiting for Russia's response.

When asked about the preparations underway, a State Department spokesperson said, "We remain open to meeting again with the Russians. And we will continue to closely coordinate with our allies and partners and abide by our north star: nothing about Europe without Europe." The spokesperson added, "Nothing about NATO without NATO. And nothing about Ukraine without Ukraine. The (Organization for Security and Co-operation in Europe) is also an important forum for diplomatic engagement."

Earlier this week, US Ambassador to the UN Linda Thomas-Greenfield said that the US is keeping the doors of communication open with the Russians, and did not count out a possible meeting between Biden and Putin.

"We have not put that off the table but it has to be under the right circumstances," Thomas-Greenfield said of any possible Putin-Biden meeting.

Diplomacy between the US and Russia has stalled in recent weeks. But Moscow has been actively engaged with other world leaders. French President Emmanuel Macron met Putin this week in Russia and the UK foreign minister met with Lavrov, also in Russia.

"There is a lot of diplomacy underway. President Biden spoke with President Macron after his diplomatic efforts, and we are engaged in regular conversations with our allies and partners, including UK Foreign Secretary Liz Truss, who was recently in Moscow," the State Department spokesperson said.

The Biden administration has still not referred to the ongoing diplomacy with Russia in recent months as negotiations, preferring to hold out that descriptor for when the talks actually dig into substantive details.

"Our region is in a period of rising strategic uncertainty," Australian Foreign Minister Marise Payne said at the news conference. "The rules and norms that have provided a foundation for our stability, and hence our prosperity are under pressure, in particular from authoritarian regimes."

Asked by CNN whether the Quad had concerns about the lengthy cooperation agreement recently released by Putin and Xi, Payne said it was not about what the Quad was against but rather what it supports: "freedom and openness and transparency."

"Where we see the sort of statement that was issued by the (Russian and Chinese) Presidents after the bilateral meeting, it is concerning because it doesn't present or represent a global order that squares with those ambitions for freedom and openness and sovereignty and the protection of territorial integrity," she said.

Indian Minister of External Affairs S. Jaishankar did not voice similar concerns but rather reiterated that Quad is "for something, not against somebody."