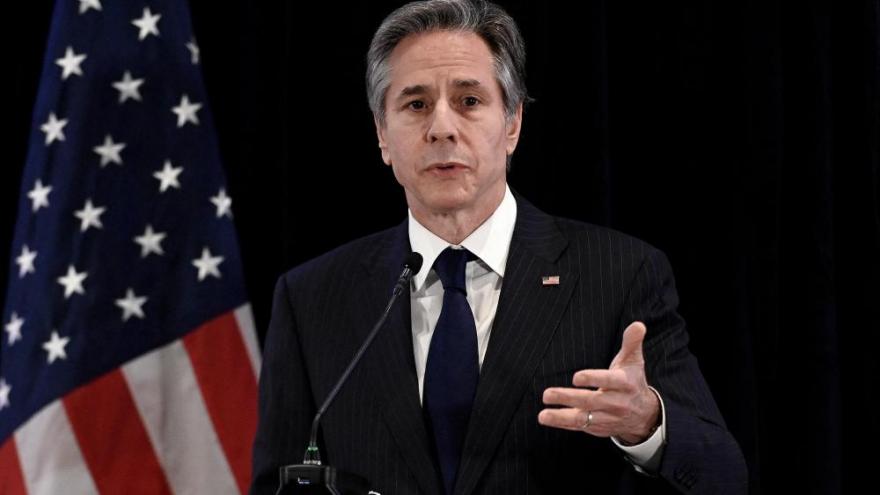 US Secretary of State Antony Blinken speaks during a press conference in Brussels, on March 4. Blinken on March 8 said that Moscow remains engaged in the effort to salvage the Iran nuclear deal, despite a recent demand by the Russian foreign minister for written guarantees that sanctions imposed for its invasion of Ukraine will not its impact future dealings with Tehran.

(CNN) -- Secretary of State Antony Blinken on Tuesday said that Moscow remains engaged in the effort to salvage the Iran nuclear deal, despite a recent demand by the Russian foreign minister for written guarantees that sanctions imposed for its invasion of Ukraine will not its impact future dealings with Tehran.

"With regard to the JCPOA, the Iran nuclear deal, we continue to work to see if we can come back to mutual compliance with Iran on the deal," the top US diplomat said during a press conference in Estonia, using an acronym for the formal name of the deal: the Joint Comprehensive Plan of Action.

"Russia continues to be engaged in those efforts, and it has its own interests in ensuring that Iran is not able to acquire a nuclear weapon," he said.

Blinken's remarks Tuesday, as well as comments on Sunday describing the Ukraine sanctions and the Iran nuclear deal discussions as "totally different" and "not in any way linked together," have sought to downplay any potential threat the demands from Moscow could have on the negotiations, which have reached a critical final stage.

US and European officials have for months warned that the time to save the 2015 agreement, which the US abandoned in 2018 under the Trump administration, is rapidly dwindling due to Iran's development of its nuclear program.

"It is time, in the next few days, for political decisions to end the #ViennaTalks. The rest is noise," European Union diplomat Enrique Mora tweeted Monday.

On Tuesday, Mora and Russian negotiator Mikhail Ulyanov met and "exchanged views on the current developments and the way ahead," Ulyanov tweeted.

That same day, the E3 nations -- the United Kingdom, France, and Germany -- called on parties to "make the decisions necessary close this deal now," and called on Russia "not to add extraneous conditions to its conclusion."

"The rate of advances in Iran's nuclear program means (the JCPOA) cannot remain on the table indefinitely. The window of opportunity is closing," UK Ambassador to the International Atomic Energy Agency (IAEA) Corinne Kitsell said on behalf of the E3.

On Monday, Iranian Foreign Minister Hossein Amir-Abdollahian said Tehran would not "allow external factors" to affect their national interests in the talks. He and Russian Foreign Minister Sergey Lavrov spoke that day, with the latter saying "that the resuscitation of the JCPOA should ensure that all its participants have equal rights regarding the unhindered development of cooperation in all areas," according to the Russian Embassy in Iran.

In remarks to CBS on Sunday, Blinken said he believed they were "close" to reimplementing the nuclear deal, but "but there are a couple of very challenging remaining issues, and nothing's done until everything's done."

On Monday, White House press secretary Jen Psaki acknowledged that "the discussion of oil is a part" of the broader negotiations around a return to the deal as the US seeks alternate oil sources to Russia, "but the most important reason is to prevent them from acquiring a nuclear weapon."