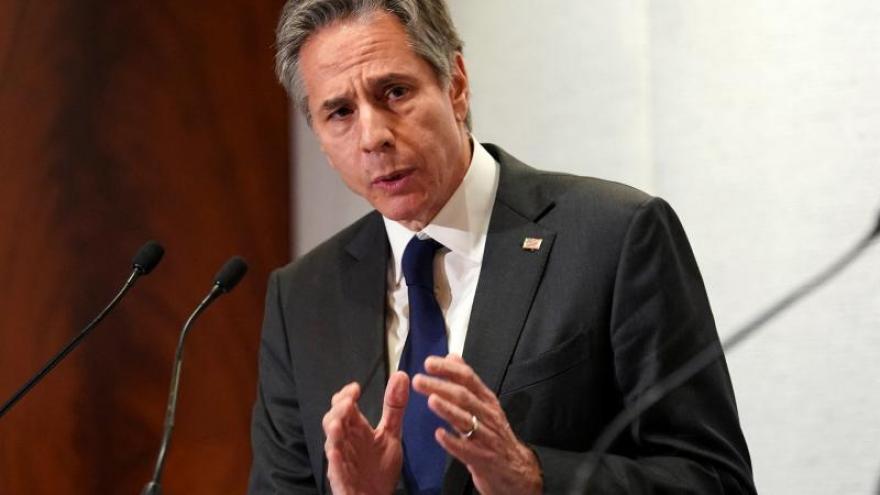 The United States has not seen evidence that Russia is pulling back troops from the Ukraine border, despite Moscow's claims, US Secretary of State Antony Blinken said Wednesday.

(CNN) -- The United States has seen "no meaningful pullback" of Russian forces from the border with Ukraine, despite Moscow's claims, US Secretary of State Antony Blinken said Wednesday.

"On the contrary, we continue to see forces, especially forces that would be in the vanguard of any renewed aggression against Ukraine, continuing to be at the border, to mass at the border," Blinken said on ABC's "Good Morning America."

On Tuesday, Moscow claimed that some of its troops were moving away from the border of Ukraine, but multiple US and Western officials have said that while they would welcome such a move, they have yet to see this happen. US officials have maintained the Russia retains the ability to invade its neighbor at any moment, including as soon as this week.

"We have heard signs from Moscow about readiness to continue diplomatic efforts, but so far we have not seen any de-escalation on the ground. On the contrary, it appears that Russia continues the military build-up," NATO Secretary General Jens Stoltenberg said Wednesday.

US Undersecretary of State for Political Affairs Toria Nuland underscored that their concern "is that the troops that matter, those that are ringing Ukraine to the north, to the east, and to the south are actually increasing their readiness, so he is maintaining every option to go in at a time of his choosing."

However, a Ukrainian intelligence report obtained by CNN showed that the government in Kyiv does not assess the current Russian troop build-up is enough to carry out "a successful large-scale armed aggression against Ukraine."

Ukrainian President Volodymyr Zelensky has consistently expressed far less alarm publicly about the potential imminence of an invasion, in contrast to officials from the US.

Blinken said Wednesday that he believes Zelensky is taking the threat "very seriously."

"He's trying to maintain calm. He doesn't want his people to panic. That's the right thing to do," Blinken said on ABC.

"But I think the Ukrainians are taking it very seriously. And of course, if there is renewed aggression by Russia, the consequences would be terrible, and first and foremost terrible for the Ukrainian people. So he recognizes that," he said.

Moscow has consistently denied it intends to invade neighboring Ukraine, and on Wednesday Kremlin spokesperson Dmitry Peskov said it was "positive" that President Joe BIden wants to continue diplomacy.

In remarks at the White House Tuesday, Biden said he believed the door for diplomacy remains open, saying the countries "should give the diplomacy every chance to succeed and I believe there are real ways to address our respective security concerns."

Blinken on Wednesday underscored that the US remains committed to trying to pursue diplomacy to avoid a potential conflict, calling it "the right" and "responsible thing to do."

"We're waiting for a response from Russia. I spoke to Foreign Minister Lavrov yesterday. He said a response is forthcoming in the next few days. I hope it comes. We'll take a hard look at it and then we'll see where we go from there. But we remain committed to seeing if we can find a diplomatic resolution," he said.

"But again, it really is President Putin's choice to make, and what we're seeing on the border remains deeply, deeply concerning," Blinken added, noting that the US and its allies are prepared to enact "massive consequences" in the face of Russian aggression.