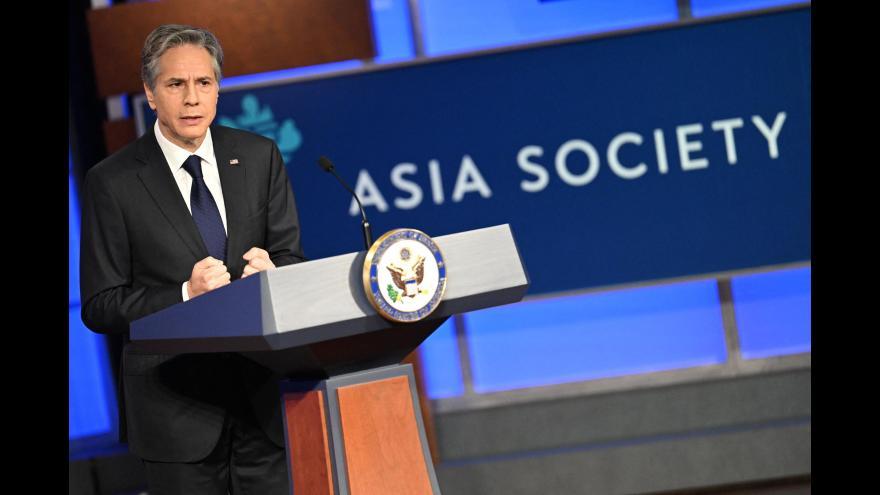 The Biden administration is "prepared to make both short and longer-term adjustments to our military posture" to respond to provocations from North Korea, Secretary of State Antony Blinken said June 13.

(CNN) -- The Biden administration is "prepared to make both short and longer-term adjustments to our military posture" to respond to provocations from North Korea, Secretary of State Antony Blinken said Monday.

Blinken's comments, made alongside his South Korean counterpart at a news conference at the State Department, come as North Korea has conducted numerous missile launches and as the US worries about a potential nuclear test by Pyongyang.

"We remain concerned about the prospects for what would be a seventh nuclear test over multiple administrations," Blinken said. "We know that the North Koreans have done preparations for such a test. We are being extremely vigilant about that."

Blinken said the US is "preparing for all contingencies" and in "very close touch" with partners like South Korea and Japan "to be able to respond quickly" if the North Koreans carry out such a test.

The top US diplomat said the US is committed "to talking about how we expand the scope and scale of combined military exercises for defensive and preparedness purposes, training on and around the Korean missile."

"And of course, we want to make sure that we have in place all the defensive capacity to deal with any possible provocation or aggression coming from" North Korea, he added.

Blinken did not provide specific details about the adjustments to US military posture that are under consideration. In March, US Indo-Pacific Command announced it had ordered "intensified Intelligence, Surveillance, and Reconnaissance collection activities in the Yellow Sea, as well as enhanced readiness among our ballistic missile defense forces in the region" in response to missile launches by North Korea.

Last week, US and South Korean fighter jets conducted a joint flyover of the Yellow Sea -- a show of force that came days after North Korea's launch of eight short-range ballistic missiles.

"South Korea and the US have demonstrated their strong ability and will to strike quickly and accurately against any North Korean provocations by demonstrating their combined defense capabilities and posture through this combined air force demonstration flight," South Korea's Defense Ministry said.

North Korea's "repeated missile provocations" were advancing in "quality and quantity," Lee said, adding that this and preparations for a nuclear test were a "grave challenge threatening peace and stability."

Despite the continued provocations from Pyongyang, Blinken reiterated Monday that the US remains "committed to a diplomatic approach," is prepared to engage with North Korea without preconditions and has "no hostile intent" toward the nation.

"But our efforts to engage without preconditions thus far have not been met with a response from" North Korea, he said. "In fact, the only response we've seen thus far has been this multiplicity of missile tests."