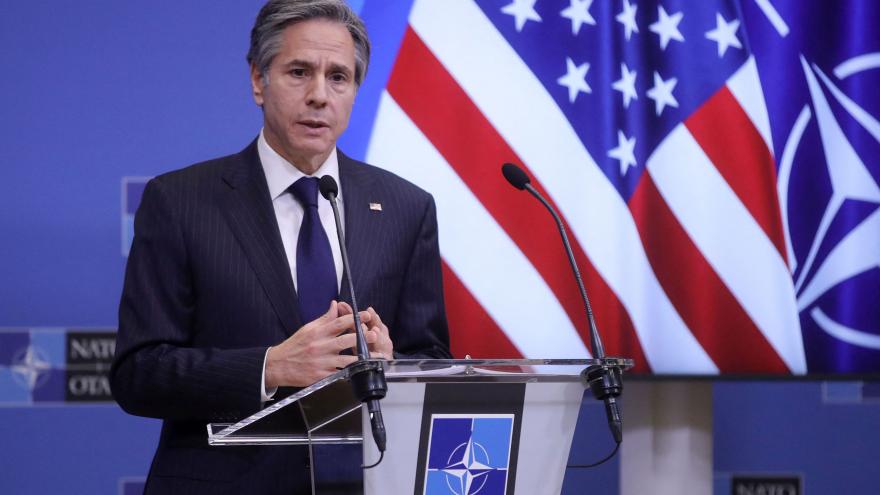 Secretary of State Antony Blinken suggested the Biden administration would not take punitive action against China for its handling of the Covid-19 outbreak . Blinken is shown at a press briefing at the end of a NATO Foreign Ministers\' meeting at the Alliance\'s headquarters in Brussels on March 24, 2021. - Olivier Hoslet/EPA/AFP/Getty Images

(CNN) -- Secretary of State Antony Blinken suggested the Biden administration would not take punitive action against China for its handling of the Covid-19 outbreak and instead stressed the importance of planning for and mitigating a future pandemic.

The top US diplomat spoke to CNN's Dana Bash in a wide-ranging inteview on "State of the Union" while in Brussels, where he engaged with NATO and European Union officials on issues ranging from Russia to China to Afghanistan.

His comment marks a shift from the heightened rhetoric of his predecessor, Mike Pompeo, and the Trump administration, which had referred to the deadly disease as the "Wuhan virus" and called for China to be punished.

While Blinken said there needed to be "accountability for the past" and echoed calls from other Biden officials for Beijing to be transparent about the 2019 outbreak, he noted that their "focus needs to be on building a stronger system for the future."

"I think the issue for us is to make sure that we do everything possible to prevent another pandemic even as we're working through this one or at the very least to make sure that we can mitigate in much more effective ways any damage done if something happens in the future," he said.

One of Joe Biden's first acts as President was to restore US ties with the World Health Organization. Former President Donald Trump moved to formally end the US relationship with the multilateral institution, cutting funding and also leveling frequent attacks against it.

Blinken told CNN that a big part of preparing for a potential future outbreak "is making sure that we have a system in place, including with the World Health Organization that features transparency, that features information sharing, and features access for international experts at the start of something like this."

Blinken expressed concern "about the methodology and the process" behind a forthcoming WHO report into the origins of the deadly plague, "including the fact that the government in Beijing apparently helped to write it," he said, but added "let's see what comes out in that report." The WHO fact-finding team that traveled to Wuhan -- where Covid-19 originated -- said it was not given access to raw data on the disease.

More broadly on China, the top US diplomat described the relationship as a multi-faceted one, with adversarial, competitive and collaborative aspects, and expressed the importance of working with allies to address the challenges posed by China.

That message of unity underscored Blinken's time in Brussels, where he attended the NATO Foreign Ministerial and met with European Union officials and his Belgian counterpart.

On Afghanistan, Blinken told Bash that it was important for him to hear from NATO allies as the Biden administration conducts its review of policy towards the country and ahead of the May 1 deadline for withdrawal of American troops stipulated in the US agreement with the Taliban. Biden said last week it would "hard to meet" that deadline.

"One of things that was important was not only to share our thinking as we're going through this review, including the May 1st deadline, but to listen, to hear from our partners who are so invested, their ideas, their thoughts, their analysis," Blinken said. "And that's exactly what I did. I listened very carefully. I phoned back to Washington, spoke to the President to relay the views of our allies and partners and that's going to factor into his thinking and into the decisions he makes."

On Russia, whose aggressive behavior is a key concern of both the US and NATO alliance, Blinken told CNN the administration would "take necessary actions at a time and place of our choosing." He declined to give specific details.

Numerous lawmakers on Capitol Hill have pressed the administration to act with a stronger hand to prevent the completion of the natural gas pipeline between Russia and Germany known as Nord Stream 2. The project represents a public point of contention between Berlin and Washington, and Blinken said it was important for him to be able to tell his German counterpart directly that they view the pipeline as a bad deal.

"It gives Russia more of a weapon using energy as a tool of coercion," he said.

"We just wanted to make sure that there was no ambiguity in our position, that our friends and partners understood us," Blinken said. "And it's really unfortunate that the pipeline is in any way a source of division, but despite again that difference it's not taking away from the fact that, inversely, every other area, we are working most closely together than ever."

The secretary of state, pushed by Bash to comment on whether the administration views Saudi Crown Prince Mohammed bin Salman as a killer following the death of journalist Jamal Khashoggi, said that "rupturing the relationship actually won't help us advance our interests or values."

Biden in February declined to apply sanctions directly to the crown prince, who the US intelligence community determined is responsible for Khashoggi's death, despite promising to punish senior Saudi leaders while on the campaign trail.

"We have to, and we do, deal every day around the world with leaders of countries who do things that we find either from objectionable to abhorrent. But, in terms of actually advancing our interest and advancing our values, it's important to deal with them," Blinken said.

"The Crown Prince is likely to be the leader of Saudi Arabia far into the future. We have a strong interest, for example, in working to end the war in Yemen, probably the worst humanitarian crisis in the world. That's going to take meaningful engagement by the Saudis," he said.