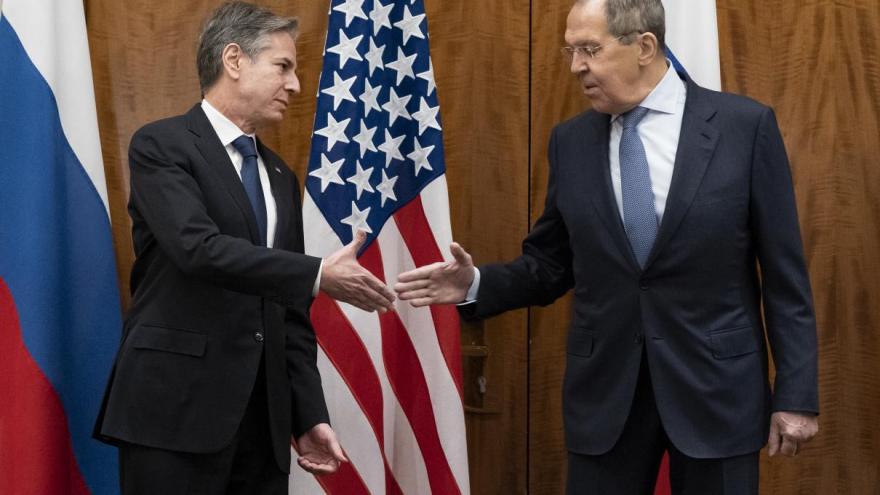 US Secretary of State Antony Blinken (left) warns any Russian 'invasion' of Ukraine would be met with a 'severe and a united response' following Lavrov meeting.

(CNN) -- US Secretary of State Antony Blinken warned that any Russian invasion of Ukraine would be "met with a severe and a united response" following his meeting Friday with Russian Foreign Minister Sergey Lavrov, the latest round of diplomatic talks that Blinken said provided a "clearer path of understanding each others' concerns."

Blinken's meeting with Lavrov came two days after President Joe Biden muddled the US message of severe consequences for Russia, saying at a press conference that a "minor incursion" might not trigger the same response from NATO as an invasion. Biden clarified Thursday that any Russian troops crossing Ukraine's border would constitute an invasion.

Blinken held a 90-minute bilateral meeting Friday in Geneva with Lavrov, in which the US sought to convince Russia to de-escalate the situation at the Ukrainian border where Russia has amassed tens of thousands of troops. Blinken said that the meeting was "not a negotiation," just like last week's talks between NATO and the West.

"We didn't expect any major breakthroughs to happen today, but I believe we are on a clearer path in terms of understanding each other's concerns, each others' positions," Blinken said at a press conference after the meeting. "Let's see what the next days bring."

The Americans and Russians agreed to keep talking -- but on little else -- following the latest round of diplomatic talks.

Blinken said that the US would provide Russia with a written response next week to the concerns that it had publicly released, something that Moscow has sought.

"I told him that following the consultations that we'll have in the coming days with allies and partners, we anticipate that we will be able to share with Russia our concerns and ideas in more detail and in writing next week, and we agreed to further discussions after that," Blinken told reporters following his sitdown with Lavrov.

But Blinken reiterated that Moscow's central demand -- that the US and NATO commit to never admitting Ukraine as a member -- is simply a non-starter.

On Friday, Moscow's reiterated its insistence that NATO not only agree never to admit Ukraine but also the withdrawal of troops and forces back to NATO's 1997 borders, before several countries in Eastern Europe were admitted. The Russian foreign ministry specifically singled out Bulgaria and Romania, the latter of which shares Ukraine's southern border.

"We are talking about the withdrawal of foreign forces, hardware, and weapons as well as other steps that will ensure that the setup in the countries that were not NATO members back in 1997 would be reverted to what it was back then," the foreign ministry said in a statement. "These include Bulgaria and Romania."

Russia has amassed more than 100,000 troops along the Ukrainian border, and US officials have warned an attack could happen at any time. Biden said Wednesday he believed Russian President Vladimir Putin would invade Ukraine. The US has warned that it will impose severe consequences in the event of an invasion -- and Blinken reiterated Friday that meant Russian troops crossing the border.

"We've been clear. If any Russian military forces move across Ukraine's border, that's a renewed invasion. It will be met with swift, severe and a united response from the United States and our partners and allies," Blinken said.

Lavrov, however, insisted Friday that Russia was not planning to attack.

"You claim that we are going to attack Ukraine, although we have repeatedly explained that this is not the case," Lavrov said when asked about a potential invasion by CNN Senior International Correspondent Frederik Pleitgen.

Blinken said that the US was acting on the basis of "facts and history," noting the Russian troops that have swelled on the border as well as Russia's 2014 invasion of Crimea. He said that a "charitable interpretation" of their disagreements is that the US and Russia sometimes have "different interpretations of history."

"Today, we certainly heard things we strongly disagree with in terms of that history," Blinken said.

Blinken's meeting with Lavrov on Friday followed his meetings in Berlin with his German, UK and French counterparts and Kyiv, where he met with Ukrainian President Volodymyr Zelensky.

Biden's comments on Wednesday acknowledging disunity within NATO over how to respond to a "minor incursion" by Russia prompted outcry from stunned Ukrainian officials who warned the remarks were a green-light to Putin. Ukrainian President Volodymyr Zelensky tweeted Thursday "there are no minor incursions," in what amounted to an implicit rebuke of Biden.