Blood banks phase out collecting convalescent plasma, but fear a US blood shortage 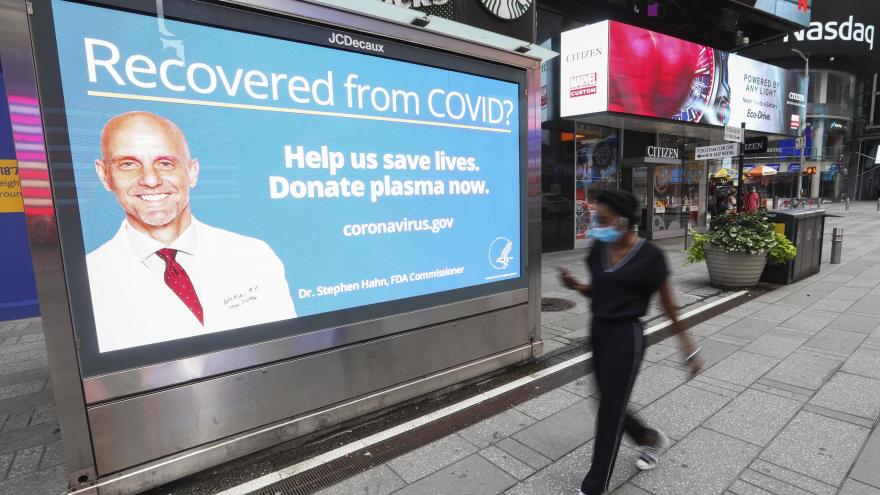 An electronic screen in New York City in August shows an advertisement calling for plasma donation from patients recovered from Covid-19. - Wang Ying/Xinhua/Getty

(CNN) -- In the early months of the pandemic, blood donation centers around the country rushed to collect convalescent plasma as it was seen as a potential wonder treatment for Covid-19.

Now many are moving away from plasma collection, and even doing away with antibody testing to find volunteers who want to donate.

With vaccinations up and case counts down, doctors are administering less convalescent plasma, as numerous clinical trials found the treatment does not significantly lower Covid-19 mortality or shorten hospital stays.

In February, the US Food and Drug Administration altered its emergency authorization, limiting use to convalescent plasma with high antibody levels, and in hospitalized patients early in their disease course.

Overall, hospital demand for plasma has diminished, and blood banks are reporting they have enough plasma stockpiled if there is once again a demand, since it has a year-long shelf life.

But while plasma needs have subsided, blood banks now face a blood shortage, which is expected to only get worse through the summer.

But at the same time, she says, the nation's blood supply is in a "precarious" position. "For many blood centers, if not all blood centers around the country right now, we're seeing less than two days supply of certain blood types."

Last spring, donation centers large and small ramped up free antibody testing for Covid-19 survivors who came to donate blood. Donors with positive antibodies could donate their convalescent plasma, rich in antibodies to SARS-CoV-2, which could be used to treat patients hospitalized with Covid-19.

The situation this spring is in stark contrast to that of a year ago, when officials such as US Surgeon General Jerome Adams, Dr. Anthony Fauci, and other leaders began calling on those who had recovered from Covid-19 to contribute their plasma.

The US Department of Health and Human Services announced an $8 million ad campaign in July "imploring" Americans to donate. In August, the FDA gave the intial emergency authorization to treat hospitalized patients with it.

"All Americans can help spread the word: If you've recovered from Covid-19, you can help join the fight by donating plasma, because the fight is in us," HHS Secretary Alex Azar said at the time.

Blood banks could be reimbursed for collecting plasma through funding provided by the federal government's Biomedical Advanced Research and Development Authority.

Throughout 2020 and the early months of this year, Covid-19 survivors stepped up in a big way.

"It's been astonishing to see how these folks who have recovered from Covid are willing to give of themselves to try and help someone else," said Dr. Joe Chaffin, chief medical officer for LifeStream. "So while everyone is disappointed that the the product didn't have as much impact as we had hoped, we can't possibly thank those donors enough. I salute them with every fiber of my being."

During a major surge of Covid-19 cases in and around Los Angeles this winter, his blood bank was providing area hospitals with 75 units of convalescent plasma each day. Now demand is down to about one unit per day, he estimated.

"The science cast doubt on it, the medical community is losing interest in it, and BARDA is losing interest in funding it further. So all of those things interact and lead to a decision," said Dr. Kirsten Alcorn, co-chief medical officer at Bloodworks Northwest. "If the science was telling us this was really useful, and nobody paid for it, we would still do it."

Convalescent plasma just hasn't lived up to its original fanfare, according to Dr. David Fajgenbaum, an assistant professor of medicine at the University of Pennsylvania's Perelman School of Medicine.

He leads an ambitious project that seeks to review the literature on how every drug ever tried against Covid-19 has performed, and publishes the findings in a database.

After analyzing nine randomized clinical trials that tested his research team graded convalescent plasma a "D." Only one of the trials met its patient improvement goals, he explained.

While the treatment hasn't been measuring up in the studies so far, it's still important to keep an open mind that plasma can likely provide at least some benefit for certain people at a certain point in the disease course, likely in the first few days after infection.

"In the same way that monoclonal antibodies are extraordinarily effective given early in the disease course, one would surmise that plasma would be more likely to be more helpful if given earlier," Fajgenbaum said. "And these trials just haven't been studying it in earlier disease course."

While some patients do respond to convalescent plasma, immunity benefits do not extend to patients receiving other blood products such as platelets or red blood cells, he explained.

He also sought to placate any concern that it might be possible to receive Covid-19 from a blood transfusion, citing a study showing that even in documented cases when a PCR-positive individual has donated blood, that blood didn't transmit SARS-CoV-2.

The reason is that "there is no good home for SARS-CoV-2 in the blood," Fajgenbaum said. "Even in people with Covid-19 who were rip-roaringly sick, the virus is rarely detectable in the blood. And when it was detectable, it was not transmissible."

Though they expected to easily meet any future convalescent plasma demand, the same regional blood banks and national organizations report a shortfall in the amount of general blood donations.

The American Red Cross noted in an April 13 statement that donor turnout had fallen to its lowest level since the pandemic began. The exact numbers can vary by region, but blood centers in the Northeast, Southeast, Southwest, and Midwest reported a major blood shortage. The organization hit pause on collecting Covid-19 convalescent plasma on March 26, but is still testing blood, platelet, and plasma donors for antibodies at least until the end of June.

For instance, Bloodworks Northwest is only able to meet 85% of demand from hospitals in its region, according to its spokesman John Yeager. And Kou, whose organization oversees blood banks in the Midwest, reported that blood donations from schools and businesses were down 40% in the first quarter of 2021.

Many blood drives -- hosted by schools, workplaces, and churches -- are on hold as in-person interaction in many areas hasn't yet resumed. And the lack of blood isn't enough to meet demand as more patients return to hospitals for elective procedures that were postponed earlier in the pandemic. More than 1,000 blood drives around the country are canceled each week as a result of the pandemic, the Red Cross says.

That's partly due to patients and hospitals playing catchup on elected procedures that were delayed earlier in the pandemic when more hospital beds were occupied with Covid-19 patients. It could also be related to people coming out of isolation and resuming normal activities. As a result, they can incur more injuries.

Some 1 in 7 patients who wind up in the hospital require blood transfusions. Blood can't be manufactured, and the only way for hospitals to get enough of it is for people to roll up their sleeves.

"We believe last week's low donor turn out is potentially a signal of more serious challenges to come in ensuring there is a sufficient blood supply readily available for patients as donors resume travel, family vacations and other pre-pandemic activities," said Dr. Pampee Young, chief medical officer of the American Red Cross, in a statement.

Bloodworks Northwest reports that a 24-hour supply is all that remains on its "near-empty shelves," with hospitals using blood faster than the blood bank can collect it.

"A couple of our members have said this is the worst they've ever seen in their careers as far as inventory levels, and probably certainly at least the very worst since those early days of the pandemic," Fry, of America's Blood Centers, said. "It's probably only going to get worse, quite frankly. The summer months are always extremely difficult."

To help bolster the US blood supply, you can sign up to donate by downloading the American Red Cross blood donor app, visiting redcrossblood.org or calling 1-800-RED-CROSS (1-800-733-2767).

Or you can use the zip code finder made by America's Blood Centers to find your nearest donation center.