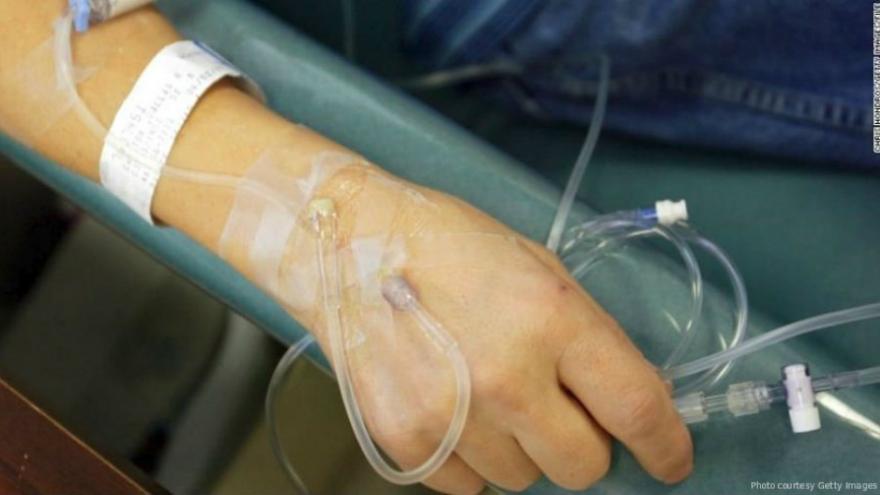 (CNN) -- Promising new research enables scientists to use a blood test to screen for different types of cancers at early stages.

The test, known as a liquid biopsy, is used to screen for DNA from cancer cells and was able to detect 10 different cancers with good accuracy.

Dr. Eric Klein from the Taussig Cancer Institute at Cleveland Clinic in the United States led the research, which is to be presented at the annual conference of the American Society of Clinical Oncology in Chicago, the largest gathering of oncologists worldwide.

Most cancers are detected at advanced stages when treatment is more complicated and cure rates are low, the conference abstract states.

The non-invasive DNA blood test isn't yet ready to use in practice, but the test would enable cancers to be detected in the early stages, before symptoms begin, when treatment is more likely to succeed. These types of tests could become part of a universal screening process for cancer.

"Detecting cancer early, before it has spread is one of the most powerful ways to ensure more people are offered treatments which give them a better chance of beating the disease," said Fiona Osgun of Cancer Research UK, who was not part of the study.

The research sampled 1,627 participants, of which 749 were cancer-free and 878 had various types of newly detected, untreated cancer

The blood test involved three tests on the participants' blood samples and showed sensitivity in detecting 10 different types of cancer, including pancreatic, ovarian, lung and esophageal cancer, among others.

The results showed that the test most accurately diagnosed ovarian cancer, with 90% accuracy, followed by hepatobiliary -- a highly lethal cancer that attacks the liver and gallbladder -- and pancreatic cancer, with 80% accuracy.

The test's high sensitivity to pancreatic cancer is especially promising. Pancreatic cancer is usually diagnosed when the cancer is too advanced to be operated on, said Dr. Chris Abbosh, a clinical research associate at University College London's Cancer Institute.

However, it's important to note that the number of people in which these cancers were detected was small. For both ovarian and pancreatic cancer, only 10 cases were detected, while only five people with hepatobiliary cancer were identified.

Head and neck cancer as well as lung cancer were detected with the least accuracy, at 56% and 59%, respectively.

But the results are promising. The ability to diagnose cancer early on and then offer patients effective treatment for their disease will likely save many lives, according to Dr. Nickolas Papadopoulos, professor of oncology and pathology at Johns Hopkins Medicine and senior author of a study on blood tests for the early detection of cancer.

For many common cancers, rates of survival triple when diagnosed at an early stage, according to Cancer Research UK.

There's more work to do before it can be used regularly, though.

"There's still a lot more research needed to achieve this goal. This blood test was better at picking up certain cancers than others so we need further trials to test its accuracy and also determine whether it will help save lives," said Osgun.

"This is moving exceptionally fast. I think that in the next few five to 10 years, if this continues to work like this, we may see this coming through into normal practice," Attard said.

But Abbosh notes several caveats around the research.

"To match the promise of being able to screen for cancer, this test must be able to identify patients who do not have symptoms or signs of cancer. Finally, it will be important to establish how good this test is at identifying patients with the earliest stage of cancer. In stage I disease, surgical interventions are most likely to remove all a patient's cancer and result in a cure -- this data is no yet available," Abbosh said.

Dr. H. Gilbert Welch, professor of medicine at the Dartmouth Institute for Health Policy and Clinical Practice, said in a previous CNN report that the analysis involved in these tests is "extraordinarily complex."

"There are a lot of steps in a liquid biopsy and much potential for things to go awry," he said.