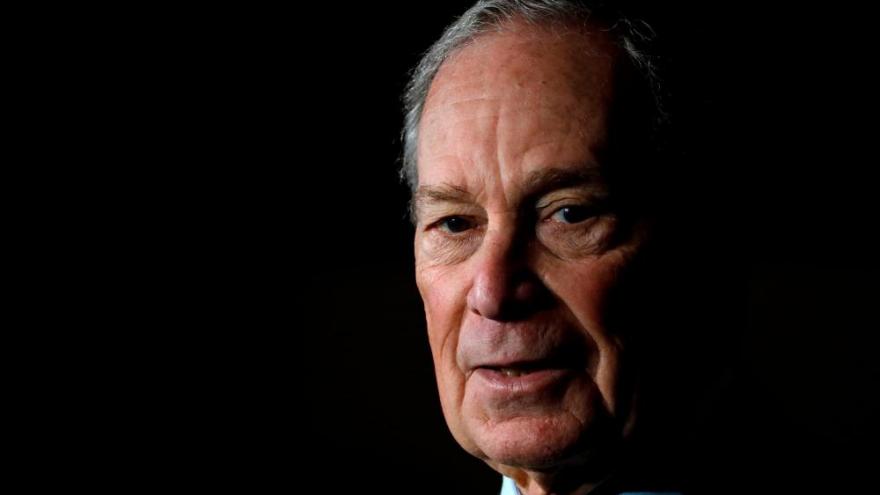 Democratic presidential candidate Michael Bloomberg said Friday that women covered by three nondisclosure agreements who had made complaints against him can be released from those pacts if they contact his company.

(CNN) -- Democratic presidential candidate Michael Bloomberg said Friday that women covered by three nondisclosure agreements who had made complaints against him can be released from those pacts if they contact his company.

Bloomberg tweeted, "Bloomberg LP has identified 3 NDAs signed over the past 30+ years with women to address complaints about comments they said I had made."

"If any of them want to be released from their NDAs, they should contact the company and they'll be given a release," the tweet reads.

The announcement comes after Massachusetts Sen. Elizabeth Warren pressed the businessman and former New York City mayor at the Democratic presidential debate Wednesday and again at a CNN town hall Thursday to release women who have made allegations of sexist and misogynistic behavior against him from their nondisclosure agreements.

A senior Bloomberg adviser tells CNN that the woman behind one of the three NDAs is Sekiko Garrison, who accused Bloomberg in the 1990s of repeatedly saying crass things in the workplace. Bloomberg spokesman Stu Loeser has said that Bloomberg "did not make any of the statements alleged in the Sekiko Garrison case."

Garrison's lawyer, Neal Brickman, has not responded to requests for comment.

According to the adviser, the other two NDAs did not result from lawsuits, but rather complaints. The adviser would not say anything about the identify of the women covered by those agreements.

The adviser also stated that there are certainly other lawsuits about gender discrimination or sexual harassment at the company, but again, only three have been identified as accusing Bloomberg for saying inappropriate things.

Separately, a campaign aide said Bloomberg had been "thinking about this as a CEO, and then decided to think about it as a person."

Bloomberg said in a statement he tweeted that moving forward, his company would not offer confidentiality agreements to resolve claims of sexual harassment or misconduct. He said nondisclosure agreements, "promote a culture of silence in the workplace and contribute to a culture of women not feeling safe or supported."

The former mayor said he asked his company's human resources team to consult with experts and "review and reform our policies where necessary with regard to equal pay and promotion, sexual harassment and discrimination, and other legal tools that prevent culture change." He said he directed his presidential campaign to review those current policies as well.

Bloomberg sought to draw a distinction between himself and President Donald Trump on this issue.

"When we share a respect for each other and treat all of our colleagues as we ourselves would wish to be treated, we all do our best work. This is something Donald Trump does not understand — not when he ran his business, and not now when he is recklessly running our country," Bloomberg said.

"I will be a leader whom women can trust," he said.

Warren repeatedly pressed Bloomberg over two days to release the women from the agreements. On Thursday night, Warren brought a physical copy of a contract she wrote herself to a CNN town hall and urged Bloomberg to sign it so that the women could tell their side of the story.

In response to Bloomberg's announcement Friday, Warren told reporters in Las Vegas that the offer to release the women is "just not good enough."

"Michael Bloomberg needs to do a blanket release so that all women who have been muzzled by nondisclosure agreements can step up and tell their side of the story in terms of what Michael Bloomberg has done," Warren said.

At the debate, Bloomberg said he would not release the women from the agreements when pressed by Warren. He said the parties involved had signed the agreements, "and we'll live with it."

"None of them accuse me of doing anything other than maybe they didn't like a joke I told," Bloomberg said, which was met by some groans from the audience in the debate hall.

The billionaire candidate faces claims from the 1990s that he made sexist and crude comments in the workplace. According to allegations laid out in two lawsuits, Bloomberg told a group of female employees prior to a male colleagues wedding to "line up to give him a blow job as a wedding present"; that he would regularly direct comments like "look at that nice piece of ass" at women in the office; and that upon learning that a female employee was expecting a baby, he responded: "Kill it!"

Bloomberg, through his representatives, has denied making the "kill it" comment and other remarks laid out in at least two lawsuits but has acknowledged that he has made comments that do not align with his values. At the Democratic presidential debate, Bloomberg said he has "no tolerance for the kind of behavior that the #MeToo movement has exposed."