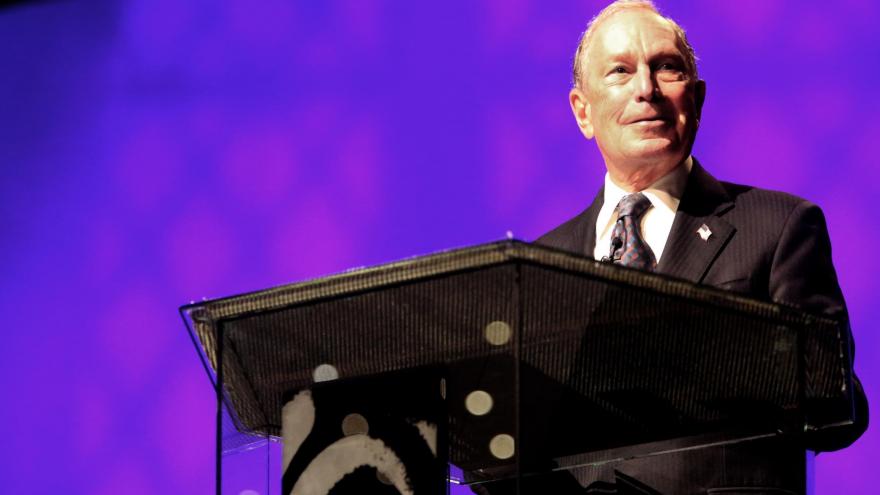 (CNN) -- Former New York City Mayor Michael Bloomberg has placed at least $29 million worth of television advertising over the next two weeks, according to data from Kantar Media/CMAG, possibly signaling that his formal entry to the 2020 presidential race is imminent.

Bloomberg's massive buy, which will begin next week, is more than the entire Democratic field has spent on TV advertising in the race so far, excluding businessman Tom Steyer, who himself will have aired nearly $63 million of TV ads by the end of Bloomberg's initial bookings.

About half of the initial bookings, $15 million, is spread across just five states -- California, Florida, Texas, New York, and Pennsylvania. Bloomberg also has more than $1 million booked in Washington, North Carolina, Illinois and Ohio, and nearly $1 million in Michigan. Top markets include New York, Los Angeles, Houston, Dallas-Ft. Worth, and Miami-Ft. Lauderdale.

As a result of these bookings, next week will see the most spending on political advertising of any week so far in 2019.

Steyer, worth $1.6 billion, has spent at an unparalleled rate on TV campaign ads since entering the race, and Bloomberg, worth over $50 billion, looks like he may challenge that.

Bloomberg has yet to officially decide to mount a late-entry presidential bid, but he and his team have been putting plans into place. The former mayor has filed to get on the ballot in both Alabama and Arkansas, two states with early filing deadlines, and Bloomberg aides formally filed his statement of candidacy with the Federal Election Commission on Thursday. Even still, a Bloomberg source tells CNN the filing is another step, but not an announcement or an indication of a final decision.

"Mike believes that Trump is an existential threat to the country. He's not waiting to take on the President, he's starting now. This is all hands on deck," Bloomberg spokesman Jason Schechter told CNN.

Bloomberg spent more than $100 million during the 2018 midterms alone, money that offered cash-strapped candidates who would go on to win their races a lifeline in the final weeks of the campaign. According to the Center for Responsive Politics, Bloomberg was the second most prolific donor in the midterms, only behind top Republican donors Sheldon and Miriam Adelson.

Vermont Sen. Bernie Sanders said in a statement he is "disgusted by the idea that Michael Bloomberg or any other billionaire thinks they can circumvent the political process and spend tens of millions of dollars to buy our elections."

"If you can't build grassroots support for your candidacy, you have no business running for president," Sanders said. "The American people are sick and tired of the power of billionaires, and I suspect they won't react well to someone trying to buy an election."