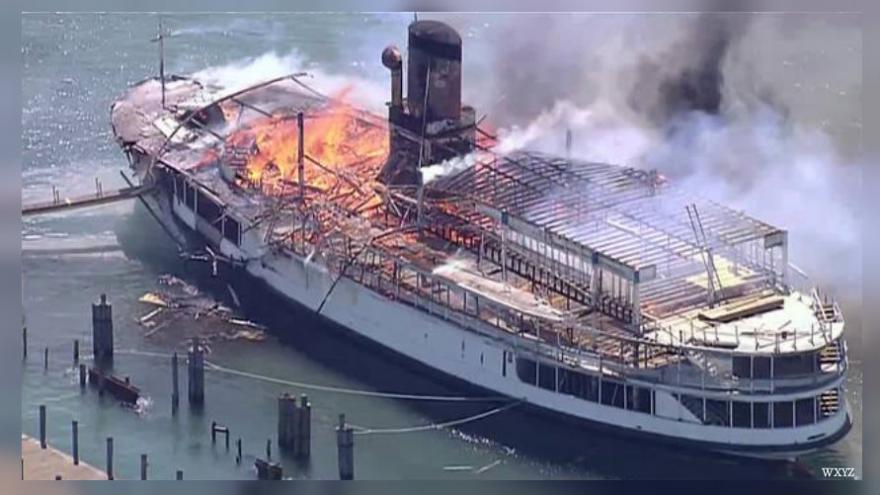 DETROIT, Mich. (AP) — A floating piece of Detroit nostalgia was gutted by fire Friday as flames roared through one of two historic steamships that once ferried people from the city to an island amusement park in the Detroit River.

The SS Ste. Claire caught fire while docked at a marina east of downtown.

The cause of the blaze was under investigation, but Detroit Deputy Fire Commissioner Dave Fornell said welding being done on the mostly wooden boat when the fire broke out about 11:30 a.m. was suspected.

Police and fire officials said it was doubtful the aging vessel could be salvaged.

"It's an iconic piece of history ... a lot of history," police Chief James Craig said.

However, Ste. Claire owner Ron Kattoo said he hoped to rebuild the boat if possible. He called the fire and damage "heartbreaking" as firefighters on the dock doused the flames with hoses.

Usually loaded with passengers, the Ste. Claire and SS Columbia traveled for decades between Detroit and Boblo Island in Canada, about 15 miles (24 kilometers) away.

The three-story, 197-foot Ste. Claire was built in 1910. The Columbia was launched in 1902. The boats made their last runs in 1991, and the amusement park closed two years later.

Both steamships were designated National Historic Landmarks in 1992.

The Columbia was sold and moved by tugboat in 2014 to Toledo, Ohio, for repairs before heading on to New York state, where it was to be restored as a floating museum.