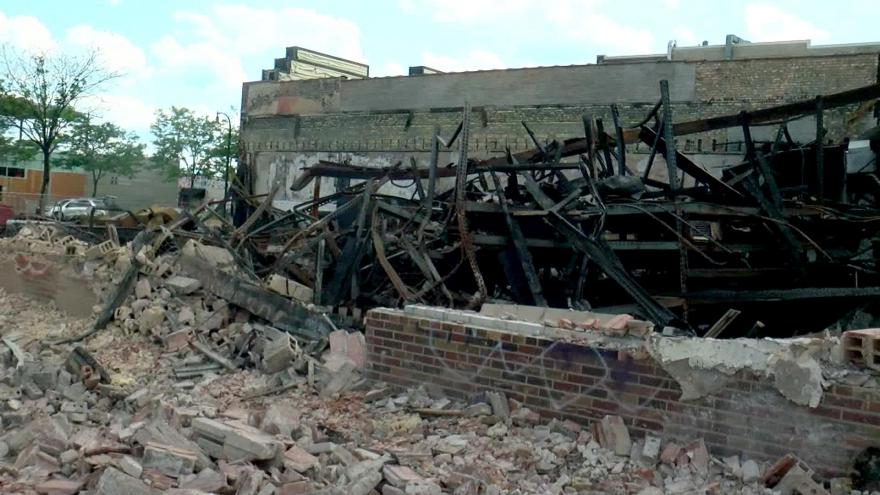 A body was discovered in the burned-out wreckage of Max It Pawn in Minneapolis, police said.

(CNN) -- Minneapolis police said officers found the body of a man in a building burned down during the protests over the death of George Floyd in May.

"We are treating this death as a homicide," police spokesman John Elder told CNN.

On Monday morning, officials from Minneapolis Police and Fire Departments along with agents from the federal Bureau of Alcohol, Tobacco, Firearms and Explosives went to a building on East Lake Street based on an anonymous tip, Elder said.

Officials searched the burned rubble where Max It Pawn once stood and found a "deceased individual," Elder said.

The body "appears to have suffered thermal injuries" and was taken to the Hennepin County Medical Examiner's Office, Elder said. The victim's identity will be released along with the nature and cause of death, he said.

On June 8, the US attorney's office in Minneapolis filed an arson charge against a 25-year-old man after an investigation into the fire of Max It Pawn where the body was found, Elder said.

Protests against racial injustice and police brutality broke out all over the country following Floyd's death in Minneapolis police custody in May.

Last month, federal officials arrested a man and charged him with aiding and abetting in the arson of the heavily damaged Third Precinct police station in Minneapolis on May 28. Police set up a fence around the precinct during the protests, but thousands of protesters knocked it over, crowding around the precinct and lighting it on fire.

"The precinct is on fire. We don't know where the police are," said CNN National Correspondent Sara Sidner at the time. "The fire alarm is going on inside ... People are cheering and more fireworks are going off as the police precinct is burning."