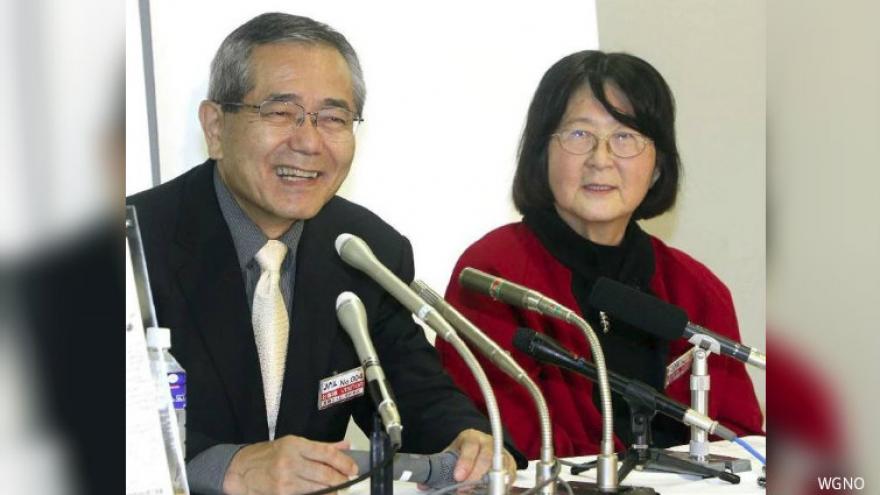 By Chris Boyette and Joe Sterling

The body of Sumire Negishi, 80, and a vehicle belonging to her and her husband were spotted at the landfill just south of Rockford, the Ogle County Sheriff's Office said.

Her husband, Purdue University chemistry professor Ei-ichi Negishi, 82, was found walking nearby, and he has been hospitalized.

The couple from West Lafayette, Indiana, had been reported missing, along with their car, to Indiana State Police on Monday night, according to the sheriff's office.

The case is under investigation, the sheriff's office said, but no foul play is suspected.

Ei-ichi Negishi shared the Nobel Prize in chemistry in 2010 with two other professors "for palladium-catalyzed cross couplings in organic synthesis."

Negishi has been a researcher at Purdue for more than 30 years and is the Herbert C. Brown Distinguished Professor Organic Chemistry and director of the Negishi-Brown Institute.

"Throughout a lifetime of love and loyalty, she supported her husband in a career of tremendous contributions to science and to the teaching and training of subsequent generations of top scientists," Daniels said in a statement.

"It appears that the Parkinson's disease from which she has been suffering and the mental confusion that age can bring to the most brilliant minds combined to produce the recent tragic events. That these phenomena are so common does not make their consequences any less cruel."