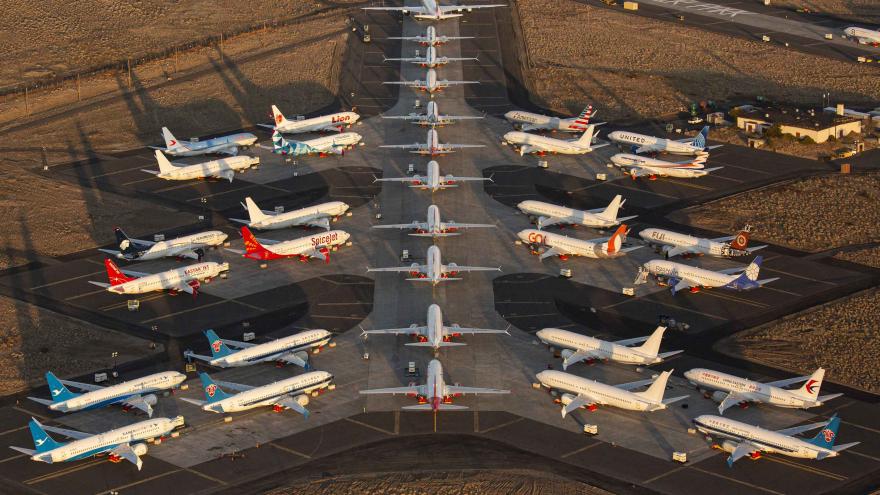 (CNN) -- Boeing employees ridiculed the 737 Max's regulatory certification progress and crudely expressed doubts about the plane's ability to fly, according to a trove of newly released internal documents.

The company on Thursday sent the documents — more than 100 pages in all — to the House and Senate committees that have been probing its design of the troubled 737 Max plane, which was grounded last March after two fatal crashes that claimed 346 lives.

Many of the pages detail internal communications shared by Boeing employees while 737 Max simulators were developed and certified in 2017 and 2018. Some messages also date back to 2013. The records don't include the names of the employees, and it is not always clear when some exchanges happened, since some emails contain conversations that appear to have happened over a separate, instant messaging system. But the exchanges represent a damaging account of what some within the company at the time thought of the planes as they achieved certification and began entering service.

"Honesty is the only way in this job — integrity when lives are on the line on the aircraft and training programs shouldn't be taken with a pinch of salt," wrote one Boeing worker to another in messages that were emailed in February 2018. "Would you put your family on a MAX simulator trained aircraft? I wouldn't."

"No," the other worker responded.

Some assessments of the 737 Max's design were particularly crass. Messages that were emailed in April 2017, a month after the first version of the plane was certified, show one employee described the airplane as "designed by clowns, who in turn are supervised by monkeys." Another comment added: "piss poor design."

Boeing, which also released the documents to the media, said Thursday that the communications "do not reflect the company we are and need to be, and they are completely unacceptable."

"We regret the content of these communications, and apologize to the [Federal Aviation Administration], Congress, our airline customers, and to the flying public for them," the company said.

The documents are yet another black eye for Boeing, which touted the Max as a capable successor to the last generation of its bestselling 737 planes. The crisis cost former CEO Dennis Muilenburg his job in December, and will likely continue to be a headache for his successor David Calhoun, who starts Monday.

A key selling point was Boeing's promise that pilots who were qualified to fly earlier versions of the 737 could transition easily to the Max without needing to spend time on a simulator, which would have created huge costs for airlines.

The new jet was intended to be similar enough to require only the tablet-based training to bring pilots up to speed on the differences between the old model and the new one. One email included in Thursday's collection of documents from Boeing's chief technical pilot made it clear how crucial it was to the company that the simulator not be required.

"I want to stress the importance of holding firm that there will not be any type of simulator training required to transition" to the Max, the person wrote to Boeing employees in March 2017. "Boeing will not allow that to happen. We'll go face to face with any regulator who tries to make that a requirement."

But neither the Max training nor the flight manual disclosed the existence of a stabilization system known as MCAS, which was designed to operate in the background so that the Max, with larger engines and different aerodynamics, would fly similarly to the previous version.

It was an MCAS malfunction that was widely blamed for the crashes, as the system forced the planes into steep dives.

The messages that were made public Thursday show that at least some employees were troubled about what they were being asked to tell the Federal Aviation Administration as part of the plane's approval. Others, meanwhile, derided the process.

"I really would struggle to defend the [simulator] in front of the FAA next week," wrote one employee in messages emailed in May 2018.

"I still haven't been forgiven by god for the covering up I did last year," another employee said at the time, apparently referring to some other event that involved the agency.

The FAA has already seen the documents, since Boeing provided them to the agency in December. The company went into that month hoping that it could still win approval for the plane to fly again before the end of 2019. But FAA Administrator Stephen Dickson announced on Dec. 11 that such approval would not happen until sometime this year.

Boeing officials, though, were certainly aware of how the public release of the documents could impair its already badly damaged reputation.

"These communications contain provocative language, and, in certain instances, raise questions about Boeing's interactions with the FAA in connection with the simulator qualification process," the company said in its statement Thursday. "That said, we remain confident in the regulatory process for qualifying these simulators."

The FAA also released a statement, saying that it found nothing in the documents "pointed to any safety risks that were not already identified as part of the ongoing review of proposed modifications to the aircraft."

It added that it reviewed the specific Max simulator mentioned in the documents, and that the equipment has been qualified by the agency three times in the last six months.

"Any potential safety deficiencies identified in the documents have been addressed," the agency said. "While the tone and content of some of the language contained in the documents is disappointing, the FAA remains focused on following a thorough process for returning the Boeing 737 MAX to passenger service."

Again, the agency reiterated that there is no timeframe for when that will be finished.