Boeing to fix engines on 7,000 jets after fatal accident probe 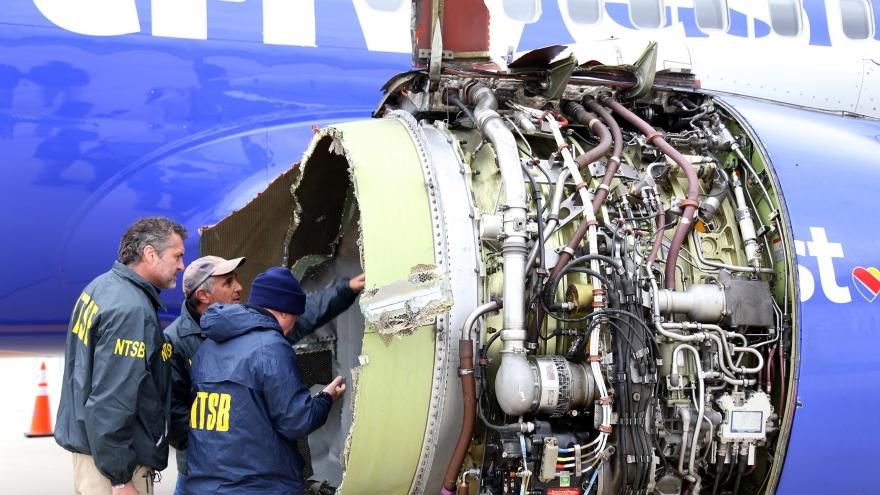 (CNN) -- Investigators of a fatal accident on a Southwest Airlines plane last year recommend that Boeing retrofit the engines of nearly 7,000 jets to prevent a repeat of the accident.

A single passenger was killed on the plane when a fan blade broke and caused part of the engine covering to hit the side of the jet. That broke one of the windows, and the cabin rapidly depressurized. The crew was able to land the plane, but the woman sitting next to that window was killed.

The National Transportation Safety Board, which investigated the accident, recommended Tuesday that Boeing redesign part of the outer covering of the planes' jet engines to prevent it from flying into the plane should a fan blade break free on a future flight. It said that all Boeing 737 Next Generation series airplanes should be retrofitted with whatever fix Boeing comes up with.

Boeing has delivered about 6,700 of the 737 NG jets to airlines around the world, but it has stopped taking new orders for them as it shifted to the 737 Max. It has fewer than 100 of the NG planes yet to build and and deliver.

Boeing 737 NG planes have not been affected by the grounding of the 737 Max in the wake of two fatal crashes. But the 737 NG had other safety issues, including the discovery of cracks on some of the older planes on a part used to keep the wings in place. Those cracks have grounded a handful of the 737 NGs.

The final decision on any fix is up to the Federal Aviation Administration, not the NTSB, whose role is to investigate the causes of accidents. But Boeing said it is already working on enhancements of the engines' design to addresss the NTSB's recommendations. And it said until that fix is in place inspections of the fans blades will allow the planes to operate safely.

"Our common goal is to help prevent similar events from happening in the future," it said.

The NTSB blamed neither Boeing nor Southwest, saying that the crack in the fan blade was not detectable and that the risk of the engine casing breaking free was unknown before this incident.

But shares of Boeing fell as much as 2% immediately after the report was released, although it later recovered much of that loss.