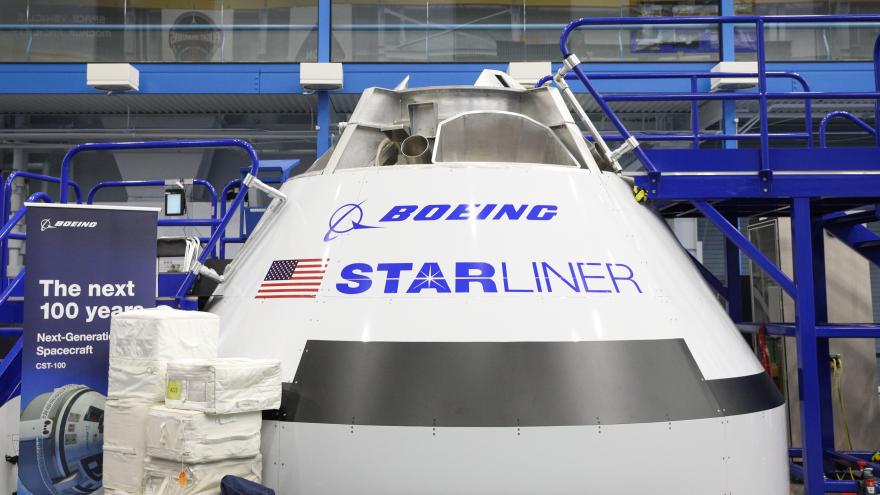 (CNN) -- A spacecraft built by Boeing will launch a milestone test flight Friday in what could be the last major step in a long-running mission to once again launch humans from US soil.

The capsule, called Starliner, is scheduled to launch into space and dock with the International Space Station over the weekend, mimicking the flight path it will take when it flies its first crewed mission next year. Liftoff is slated for 6:36 am ET.

Aboard the capsule will be a dummy nicknamed Rosie, after Rosie the Riveter, which will be outfitted with dozens of sensors to measure the G-forces astronauts will endure.

Exactly when Starliner will make its historic first flight with people on board is not clear. Boeingwill work closely with NASA to review data from Friday's mission, and both parties must deem the spacecraft ready.

NASA Administrator Jim Bridenstine said during a press conference Thursdaythat he expects the vehicle to be ready in "the first part" of next year.

Also racing to meet that timeline is SpaceX, the rocket company started by tech billionaire Elon Musk. SpaceX's Crew Dragon capsule completed its uncrewed test flight earlier this year, but still must pass another test of the capsule's emergency abort system before it's ready to fly.

It's not clear which capsule will launch first with astronauts aboard. Such a flight will mark the first time a human has flown into orbit from the United States since NASA's Space Shuttle program was retired in 2011.

NASA allotted SpaceX $2.6 billion and Boeing $4.2 billion in 2014 for the Commercial Crew Program, the formal name of the program that will launch the Crew Dragon and Starliner, representing a new approach for the space agency. While NASA has long worked with private sector contractors to build spacecraft, the organization does not typically hand over design, operation and testing duties to the companies.

Commercial Crew was modeled after a similar program that delivers uncrewed cargo missions to the International Space Station. SpaceX won that contract, alongside Northrop Grumman, and its Dragon capsule has been flying supplies to and from the space station for years. But the company has yet to fly humans.

The space agency originally predicted Starliner and Crew Dragon would be up and running by 2017, but both vehicles are years behind schedule.

NASA , as well as federal lawmakers, are anxious to speed things up. Since 2011, the space agency has paid Russia up to $86 million and $55.4 million on average for seats aboard Russian spacecraft.

Some cargo will ride to space on Friday alongside Rosie, the test dummy, "including some holiday presents, but don't tell anybody," joked NASA astronaut Michael Fincke during a press conference.

Fincke is one of three astronauts selected to be on Starliner's first crewed launch, along with NASA's Nicole Mann, and Chris Ferguson, a retired NASA astronaut who led the final 2011 Space Shuttle mission, and who will fly as a commercial astronaut on behalf of Boeing.

So far, Ferguson is the only non-government astronaut signed up to fly on Crew Dragon or Starliner. But NASA has suggested allowing people with various backgrounds to train and fly to space alongside members of its astronaut corps.

Ferguson said during Thursday's press conference that "opportunities abound" to fly astronauts from foreign space agencies and, one day, "customers who might come from any walk of life."