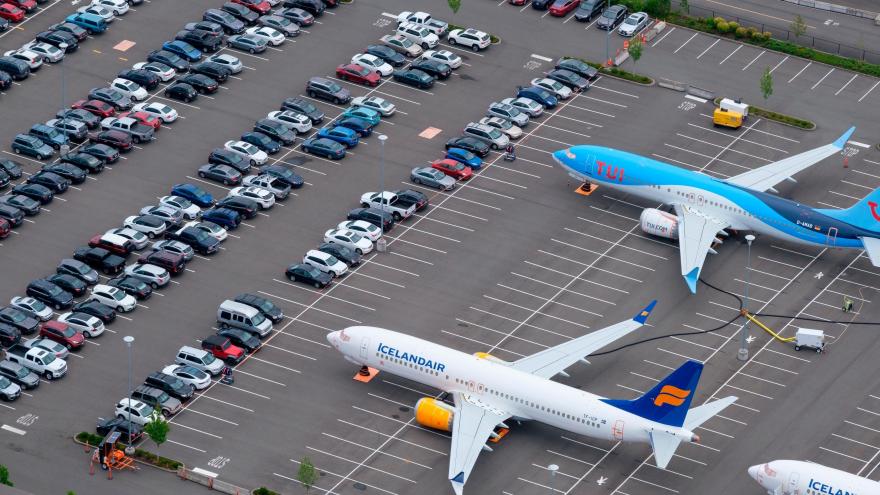 (CNN) -- Boeing CEO Dennis Muilenburg has been stripped of his role as chairman as the company struggles to get its grounded 737 Max jets cleared to fly again.

The company's board of directors on Friday said the move was an effort to strengthen "safety management," and Muilenburg will continue as CEO, president and a director. The board elected current independent lead director David L. Calhoun to serve as non-executive chairman, the company said in a statement.

"The board said splitting the chairman and CEO roles will enable Muilenburg to focus full time on running the company as it works to return the 737 MAX safely to service, ensure full support to Boeing's customers around the world, and implement changes to sharpen Boeing's focus on product and services safety," the statement said.

The board's move to split the CEO and chairman roles came the same day as a new report from the Joint Authorities Technical Review faulted both the Federal Aviation Administration and Boeing for failures in the overall certification of the 737 Max.

The chairman position is a non-executive position, running the board meetings and communicating with shareholders. The CEO is the most important day-to-day position at the company. But stripping a CEO of a chairman title he or she already holds is generally seen as a slap. For example, Tesla CEO Elon Musk had to give up the chairman position at the company to settle a complaint with the Securities and Exchange Commission that his tweets had deceived shareholders. Technically the chairman oversees the CEO, and can move to have him or her replaced.

Muilenburg said he was "fully supportive of the board's action."

But just this spring, as the Boeing 737 Max was grounded following two fatal crashes that killed all 346 people on board, the planemaker successfully argued against a shareholder resolution that would have split the two jobs.

"Over his 33-year career at Boeing, Mr. Muilenburg has developed extensive knowledge of, and unrivaled experience in, Boeing and the aerospace industry," Boeing stated in its proxy to shareholders at that time, issued only days after the 737 Max grounding. Only 35% of shareholders who voted on the proposal supported splitting the jobs.

But the company has struggled continually since then in its efforts to return the plane to service, and the timeline to get approval from regulators worldwide kept getting pushed back. Boeing at first said it expected it would take weeks after the March grounding to get a fix to the automatic safety feature tied to the crashes. Then it pushed back the timeline later and later in the year as new problems sprung up.

In April it announced it was suspending the repurchases of company shares, a way to compensate shareholders, in order to conserve cash to deal with the crisis. In July Boeing announced it would need to take a $5 billion charge to compensate airline customers for problems with the 737 Max. Sales have plunged and losses have mounted during the crisis.

Until recently Muilenburg had said Boeing expected to submit the fix to the FAA by early this month, and that it hoped to get approval for the plane to fly again shortly after that. But Boeing has yet to submit the final fix and airlines such as American Airlines, Southwest and United have all pushed back when they expect the plane to fly again until at least early January.

Last month, Muilenburg also admitted that aviation authorities around the world would not immediately follow the FAA's lead to approve the plane for flight again, leading to a phased-in reauthorization. Most of the nearly 400 737 Max jets already delivered to airlines are in other countries.

And in recent weeks there have been new problems discovered with an older version of the 737, known as the 737 NG for Next Generation, which Boeing sold before introducing the 737 Max. Cracks discovered in structural supports that hold the wings in place have caused the grounding of at least 38 of the planes so far, about 5% of those on which FAA-ordered inspections have been completed. There are 6,700 of the 737 NGs now in service, posing the potential for another costly fix for the airline.