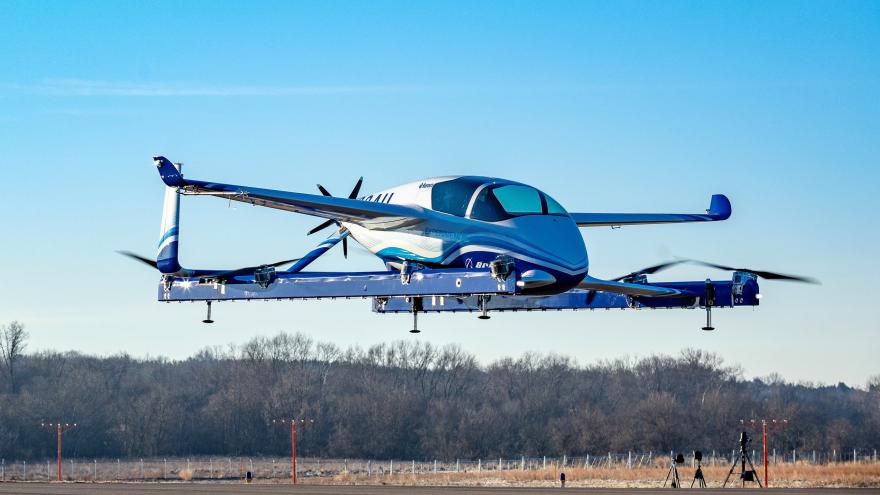 (CNN) -- Everyone has to start somewhere, and air taxis are no exception.

Boeing, the world's largest aerospace company, said it completed the first flight of its autonomous air taxi Tuesday at a small airport outside Washington, DC. No one was on board.

The flight lasted less than a minute, according to Boeing, and it didn't actually go anywhere. Instead, it hoveredabove the runway. Boeing declined to share how high above the ground it flew.

ButBoeing is hailing the achievement as a milestone for its NeXt division, which develops autonomous airplanes.

The flying carprototype is 30 feet long and 28 feet wide. It's designed to fly up to 50 miles at a time.

Boeing and its competitors such as Airbus are betting that small, self-flying airplanes -- technically dubbed electric vertical takeoff and landing (eVTOL) -- will revolutionize transportation, especially in urban areas. Boeing believes the vehicles, more commonly referred to as air taxis or flying cars, will be a solution to traffic congestion.

Although Boeing and Airbus are among the largest players in the field, there are many Silicon Valley-backed eVTOL companies, including several owned by Google co-founder Larry Page.

According to Cyrus Sigari -- an investor in urban air mobility companies who co-organized an eVTOL conference last year in Bentonville, Arkansas --Boeing's revelation signals its commitment to the space.

"They have a production style product flying and have gone to the extent of publicizing [their efforts]," Sigari told CNN Business. "That shows that Boeing is taking this urban area mobility thing quite seriously. It's very exciting to see Boeing is coming out to show they really are in this."

Eric Bartsch, chief operating officer at VerdeGo Aero, which develops the power systems for eVTOL, credits advances in autonomous technology, electric propulsion and drones with setting the stage for the new technology.

"We have the ingredients for a different generation of aircraft that wasn't really feasible 10 years ago," Bartsch said. "We're going back to that golden age of innovation where people are trying new things."

He estimates that between five and 10 other companies have done autonomous flights.

It's unclear as of now if thosecompanies will be able to match those timelines. Boeing is targeting the early 2020s.

But if self-driving car deployment is any indication, it could take much longer. The technology remains a work in progress. The vehicles need to handle a long list of challenging situations, from making a left turn at dusk on a road with pedestrians and cyclists to understanding which driver has the right of way at a four-way stop.