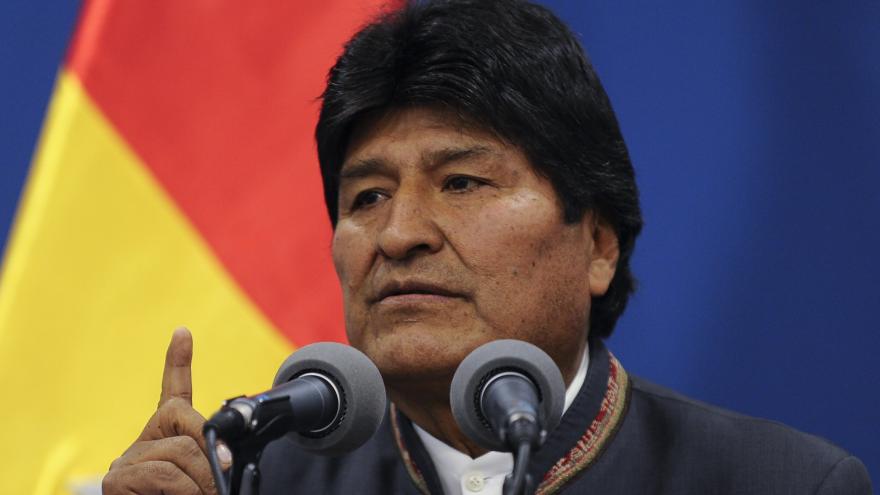 (CNN) -- Bolivian President Evo Morales resigned Sunday amid growing opposition after an international audit found the results of last month's election could not be validated due to "serious irregularities."

Morales said he was stepping down "for the good of the country," which has been roiled by protests in the days following the October 20 election. Three people have died in the protests and hundreds have been injured.

"I regret this deeply," Morales said, speaking on national television.

Morales will send his resignation letter to Congress in the next few hours, he said.

Demonstrators and the Bolivian opposition had accused electoral authorities of manipulating the vote count in favor of Morales, the country's longtime socialist leader. Morales denied the allegations, but declared himself the winner.

Vice President Álvaro García Linera announced his resignation minutes after Morales. According to the Bolivian Constitution, the President of the Senate would be next in the line of succession. But it's not clear if that person will ascend to the presidency because of widespread opposition to Morales' party.

Morales resigned just hours after he promised new elections would be held and the country's electoral council replaced following a report by the Organization of American States (OAS).

A series of alleged irregularities -- including failures in the chain of custody for ballots, alteration and forgery of electoral material, redirection of data to unauthorized servers and data manipulation -- impacted the official vote count, the OAS said.

"The manipulations to the computer system (used in the elections) are of such magnitude that they must be deeply investigated by the Bolivian State to get to the bottom (of this issue)," the OAS said, in part.

The organization recommended new elections be held under the umbrella of "new electoral authorities in order to offer a reliable process."

US Secretary of State Mike Pompeo commended the OAS audit and said the US supported the new election and the installation of a new electoral council.

Morales was one of the longest-serving heads of state in Latin America, is Bolivia's first indigenous president. He won his first election with a campaign that promised a government focused on the needs of the country's poor. But he was also accused of using the system to concentrate power.